The Need for Speed series is known for its sense of an adrenaline while the Burnout franchise is known for allowing opportunities to wreak havoc on a vehicle as beautifully as possible. Midnight Club gives car freaks the freedom to pimp out whips using loud colors for the paint job with fat rims and Mario Kart is highly revered to bring the kid out of any adult with its strength attributing to Super Mario characters and the constant innovation gameplay. Not every racing game can achieve these accolades, but attempting to include or go above and beyond these selling points should be on every developer’s checklist. With Fireburst, it’s clear that indiePub and ExDream didn’t try to check them off, instead composing a game that seemed pretty basic and accessible on paper. In actuality, the game doesn’t hold anything worth remembering or playing through a second time. 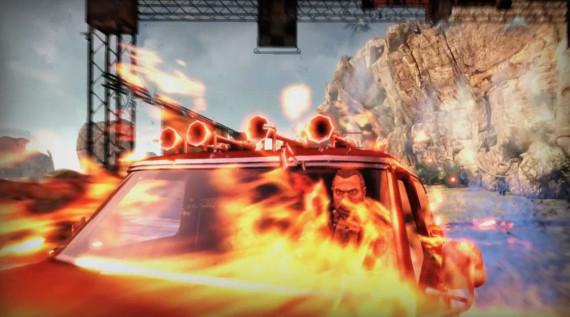 The game’s main drive (no pun intended) lies in the effort to destroy other racers by arduously igniting your car in flames while ramming into them. Depending on the vehicle players choose, these flames come in three separate forms depending on your vehicle, but are unfortunately used for the same reason: boosting your speed and being on the offensive. The challenge in the fireboost attack and lies in the meter allocated to it. It has a tendency to rise quickly the longer you hold down the boost button, and filling up the meter will cause vehicles to explode. Through this mechanic, players will have to utilize some skill in speed and in offense if they want to achieve first place status.

Using water barrels and puddles to help cool down your racer, the balance between the two takes a little bit of time to master, but it can be satisfying once players get a gist for the rhythm and feel. However, this seems to be the only big draw to ExDream’s racer. Everything else included in this game’s fire is quickly put out, because the modes, characters and lack of any real online audience keep this game from being enjoyable.

Many racing games usually have a gran prix mode full of various challenges and levels with unlockables waiting at the end. Unfortunately, Fireburst gives players 8 characters with their own set of challenges, each to unlock more cars and characters and…that’s about it. Nothing more than hit and miss challenges with horrendously difficult objectives and lacking the ability to be entertaining. Some challenges involve trying not to hit barrels, wrecking a certain number of opponents in a given lap, winning at first place with some sort of huge disadvantage or all of those requirements meshed into one. Failing and retrying these events until you successfully beat them is satisfying for a while, but once they get tougher, their poor structure becomes boring and irritating.

More irritating than that are the characters themselves. In Fireburst, what seems to be a good-hearted attempt to create some whacky, outlandish personalities actually turns out to be stereotypically rude and downright annoying. Hanako and Melvin are the more insulting ones, the former being a Japanese schoolgirl and the other a computer geek—glasses, fanny pack, short hair and all. The voice overs seem forced, especially with Hanako, whose Japanese speaking doesn’t sound very true to form and for Melvin, a little odd, considering that it’s very rare to find any ‘nerds’ or ‘geeks’ in today’s generation that would resemble this racer. Other characters in the game land on either two sides of the coin; creative and hilarious or nonsensical, disparaging and barely worth remembering.

While Custom race and Custom Demolition modes offer some local multiplayer ideas, the online version of these modes are madly discouraging. No one is hosting or playing in either of them and finding someone who would be willing is just as dismal. The game is so under-par that no one seems to want to take a chance to try and best each other from across the world. This lack of an attribute seriously hurts the game replay value.

The only redeeming quality that Fireburst has are their gorgeous tracks. The aesthetic look of the industrialized oil and gas setting combined with mountaintops, snowy fields and deserted plains give the entire game a distinct look as far as a theme is concerned. Frame by frame, everything seamlessly comes together when racing on the track and it’s awe inspiring to see special monuments and scenic routes grace the screen.

Other than that, the developers took a misstep at creating a party racing game. Fireburst is mediocre at best, playable whenever you have friends over, but not necessarily a first choice in anyone’s library. With the lack of any real story or campaign mode and busted online features, there are games that do a lot better than this offensive, boring and buggy arcade racer.