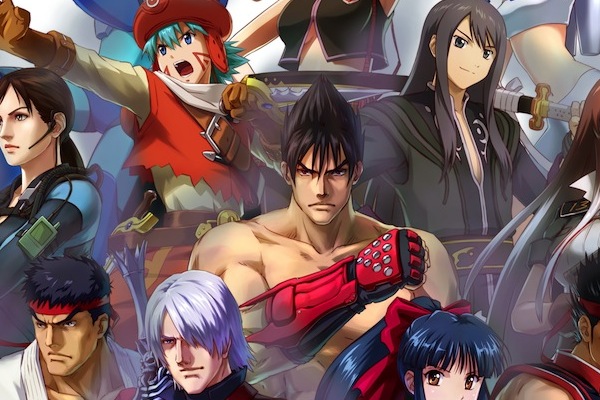 Project X  Zone (pronounced Cross Zone) brings Namco Bandai, Sega and Capcom together for the first time in a genre one wouldn’t exactly expect — an action-based SRPG. It’s a genre that doesn’t seem to fit a lot of the franchises well in theory, but at least for the Namco and Capcom ones, it worked well enough in the PS2 days when Namco X Capcom was released in Japan to critical acclaim. Sadly, that game never got an official North American release, but now that wrong can be considered righted with PXZ’s release not being limited to just one part of the world.

It did get a fan translation though, and thanks to that, it’s possible to see just how much of that game’s battle system is carried over to PXZ. Basically, the SRPG aspects extend to the beginning of turns, where you move your characters around and position them on the battlefield. Placing them close to items may help you stockpile things, but it could also leave you in a more vulnerable position for an enemy to attack. Here, you’re also able to choose items and heal up teammates. If you don’t mind sacrificing XP, you can even restore a dead partner at this point. 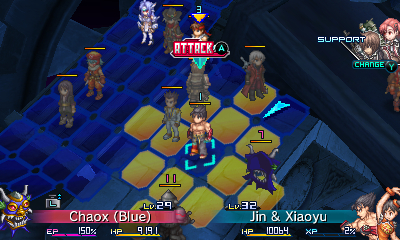 After that, the action-oriented battle system takes over, and is a welcome change of pace from those who find JRPGs or SRPGs to be tedious. The use of button combos for attacks and double teams makes it a fairly easy transition if you’re used to fighting game controls. Just like in fighting games, timing plays a crucial role in things as you want to do as many attacks as possible when juggling an opponent, and attacking just before they land lets you more damage. If you’ve got an assist character, you can string together your own attack chains, then bring in them for more attacks — or even do screen-filling Cross attacks that bring in nearby allies to do tons of damage and showcase a little bragging animation for the character in the process.

Unfortunately,  if you die during battle, you have to repeat all of the pre-fight dialogue. While it can be skipped through bit-by-bit with the A button, it would be nice if you could just press start to skip all of it. Given the ample save slots for full saves and quick saves though, it’s hard to get too upset with this little quibble. One upside to is that it encourages you to re-read dialogue, and given how crazy the plot is, you’ll want to do that from time to time. 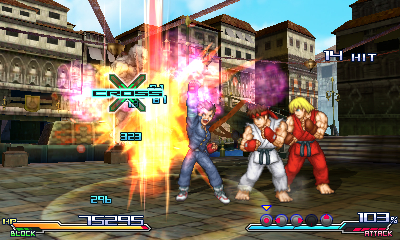 Basically, there’s an inter-dimensional portal and it’s allowing all of these different franchise universes to come together, resulting in many WTF moments as the plot unfolds. Suffice to say, as more characters get introduced, things get quite convoluted. The crossover concept works well, especially when it leads to dream meetings like Tekken characters interacting with Virtua Fighter. Despite neither series being as popular as they were in the 32-bit era, it’s still surreal. It’s also impossible to not get a chuckle as Ryu and Akira meet up given that they’re each stoic fighters with red headbands. Sadly, neither Ryo Hazuki, sailors, black cars, or games of Lucky Hit are in this.

It’s hard to really judge the storyline since it’s not out to be dramatic. It’s basically just a bunch of references with character development thrown in. It’s not meant to be taken super-seriously, and is reminiscent of a lot video game OVAs where what’s going on makes some degree of sense, but you can largely just sit back and enjoy the story passively and not feel like you’re missing much. That’s not a knock either, because it’s nice to have an RPG where you can actually do that — especially one for a portable system where you’re going to be more inclined to take breaks from the action and may not want to sit around for hours reading text on a small screen. 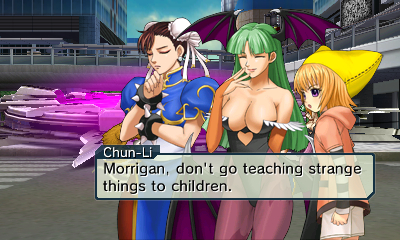 Visually, the system’s small screens work very well at showcasing action and animation on top and moves on the bottom. While the 3DS doesn’t have as high-res a screen as the Vita, it’s still capable of showcasing some gorgeous anime-style scenes, smooth move animations in battle, and incredibly-detailed character portraits during conversations.  During the SRPG movement portion, units look quite small though and seem to lack detail — although that could just be due to the small screen being a bit too small to really show off their details. In battle, they’re zoomed in and look big enough to convey the damage being done. There’s a lot going on at one time and yet things never slow down.

Even when you’ve got half a dozen characters on-screen and most of them are attacking in a way that results in lights flying on the screen constantly, the game never falters.  Fighting animations are also very fluid, and when combined with the slick anime sequences, help make up for the bland walking animations during battlefield movements. The bottom screen is used fairly well during battles since it displays your command list, which greatly aids in strategy and prevents you from feeling like you’re just randomly hitting buttons in the hopes of doing damage at the right time.

The soundtrack is full of remixed tunes from the franchises represented by playable characters (there are a ton of NPCs in this) that evoke memories of those games while also fitting what you’d hear in an RPG. The songs have been made a bit more epic sounding, resulting in faster fare like some Virtua Fighter songs being slowed down, but also made into better pieces of music as a result. In a somewhat startling move, there is no English voice acting at all. Instead, the Japanese voice acting has been left intact, and while this won’t be very jarring to anime fans used to hearing Japanese and reading subtitles to follow the action (something that is much easier to do in a game where the action is paused for dialogue), it may not be received well by folks used to English VA work in games. Given that the fanbase for this are really die-hard fans of somewhat obscure games in some way, however, there’s probably a high crossover between anime fandom and this, so it’s not going to be a deal-breaker for many people. 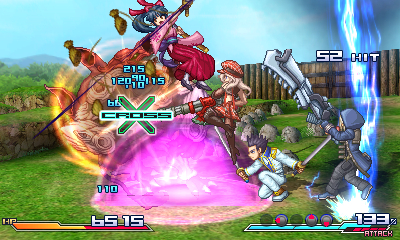 Project X Zone is an outstanding blend of action RPGs, SRPGs, and even fighting games that tries many things and manages to do them well. Anyone who loved Namco X Capcom on the PS2 will love this, as it’s basically an extension of that same idea only expanded to an absurd degree. The plot is insane, but no one’s honestly playing it for that. The storyline is simply a means to provide the next crazy thing, and it succeeds at being entertaining until that happens. It’s a very good looking game, although it’s impossible to play it and not also wish for an HD remake since it’s an animation-heavy game with somewhat small sprites that would definitely benefit from an increase in size. Still, for a 3DS game, it’s hard to ask for much more from the visuals, and the anime cutscenes are the best-looking ones on the system. Its soundtrack is also quite impressive and retools some existing music well enough to keep it true to the original while fitting the new gameplay style well. If you love fast-paced RPGs and don’t mind a silly plot, you’ll enjoy this game a lot.