If there’s one developer that has proven themselves capable of making surprisingly great games based on existing properties, it’s High Moon Studios. The developer has tackled Bourne, Transformers and now Deadpool, completing their inner circle of building off of novels, films, toys and comics. Deadpool as a character is the perfect anti-hero for a game, constantly cracking wise and using timely jokes that are either satirical or sardonic. He’s arguably the most comical superhero in Marvel’s entourage, so it’s amazing it took this long for someone to create a game around the self-indulgent badass.

To be honest, Marvel has some of the best Canadian representation in this game. Not only will you see Deadpool but Wolverine will also be making appearances throughout the story. Alongside those two, Cable, Rogue, Domino, Death and many others will join the quest to stop Mister Sinister in his diabolic cloning schemes. The story is there but not really coherent enough to care about. It’s actually thanks to Deadpool who specifically doesn’t listen to what’s going on around him that it kind of gets a pass. All you know is that Deadpool convinces High Moon Studios to make a game around him, of course breaking the fourth wall, and he must stop Mister Sinister so the future will be safe once again. Deadpool on the other hand doesn’t care about that and only has eyes on the riches and the women, so he goes on his own delusional quest. 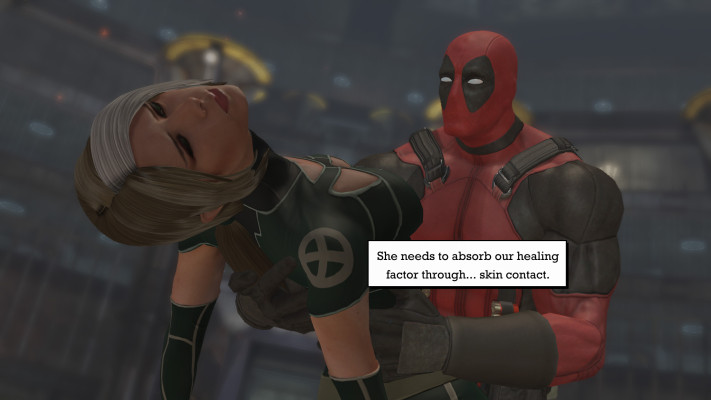 While the core gameplay mechanics aren’t necessarily the same as most common character action titles, they have stripped features from other existing franchises. The countering system is straight out of Rocksteady’s Batman games, along with the challenge maps, and the sword swinging and gun slinging combat comes from games such as Devil May Cry. While that sounds like a blessing, it’s not all great. For one, there are only three different melee weapons (balanced, fast-weak and slow-strong) and it’s not fluid to switch between each one during combat. Going into firing mode brings the camera closer to Deadpool’s shoulder, but keeps it there until a melee attack is swung, not to mention feels cumbersome. Platforming is also clunky but at least doesn’t punish you when something goes wrong.

It’s not all bad though, as you can upgrade Deadpool’s abilities and weaponry to do even more damage, fire faster or give you a little bit of health on every fourth hit. These add a bit more variety going into battle and makes you care how high your combo meter gets. The momentum meter is also one of the more enjoyable aspects to combat as, instead of having only one specific special attack for each weapon, there are three. These are tiered to the face buttons (if you’re playing with a controller, which I highly recommend) and focus on different blows such as spread attacks, multi-hit, and so on. In the end, Deadpool doesn’t do anything that goes outside the box and ends up being your run-of-the-mill character action game with some awkward camera work.

The game is paced well right up until the end where they’ll just throw multiple waves of enemies at you who can mow you down in seconds, not to mention a final boss that’s, not necessarily difficult, but repetitive and unexciting. It doesn’t help that I ran into multiple glitches, nearly forcing me to restart an entire level due to buggy checkpointing. I’ve had enemies fall indefinitely, scripting not trigger and checkpoints bringing me back farther than I should have gone. Even with some of the most satisfying moments, such as constantly jumping around a level due Deadpool not knowing how to work the foot of a Sentinel, this is still far from the most polished game you’ll find. 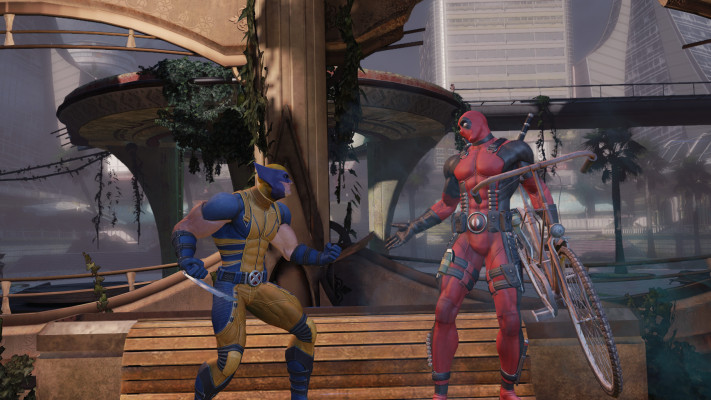 If you don’t know who Wade Wilson is, then you’ve stepped into the wrong game because the only reason there is to play Deadpool is for the comical dialogue. If you’re into Deadpool’s toilet humor and constant sexual harassment, then you’re going to love his game. A lot of the experience is designed over having the craziest and stupidest dialogue Deadpool can say, and it really works. Despite the game having mediocre combat and glitchy gameplay, it’s the strangely comical fourth-wall breaking script High Moon Studios was able to create that makes this memorable. Deadpool himself will constantly be talking to the player and there are multiple times it makes you question if you are even in control of our masked anti-hero or just the cameraman. The game is packed full of fan service that you really have to be deep in either the Deadpool or Marvel universe to fully appreciate it. At the very least, during cutscenes, you’ll be cracking a smile at the over the top and crazy events that are occurring.

Deadpool runs on Unreal Engine 3 and while the character models look good, the rest of game looks plain. Even for a PC game, there seems to be a hazy fog that overlays the visuals from showing any vibrancy. Of the nearly one hundred screenshots I took, the ones in the review are of the few I could find with any good coloring. Mix in ugly and generic looking environments with fairly idiotic artificial intelligence and you have yourself an unbalanced graphical experience. Literally the most visually pleasing moments are the 2D animated cutscenes and they seem to be only near the beginning of the adventure. 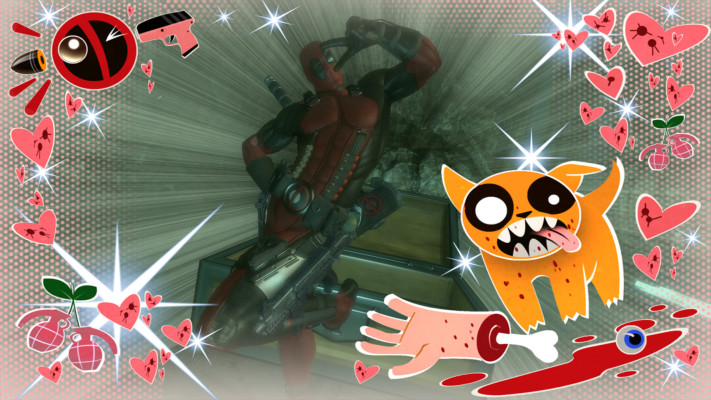 Deadpool’s comical personality allows for his game to have a little more leniency, but the overall structure of combat is dry. There’s no doubting the comedy as this will have fans breaking out in laughter during multiple scenes, but moving through an uninspiring six hours of combat doesn’t help our masked anti-hero. Deadpool gives what his fans want, but exciting gameplay moments are too few and far between. It’s a great shame that the rest of the game isn’t up to snuff with the character performances as the industry needs more comical stories such as this.