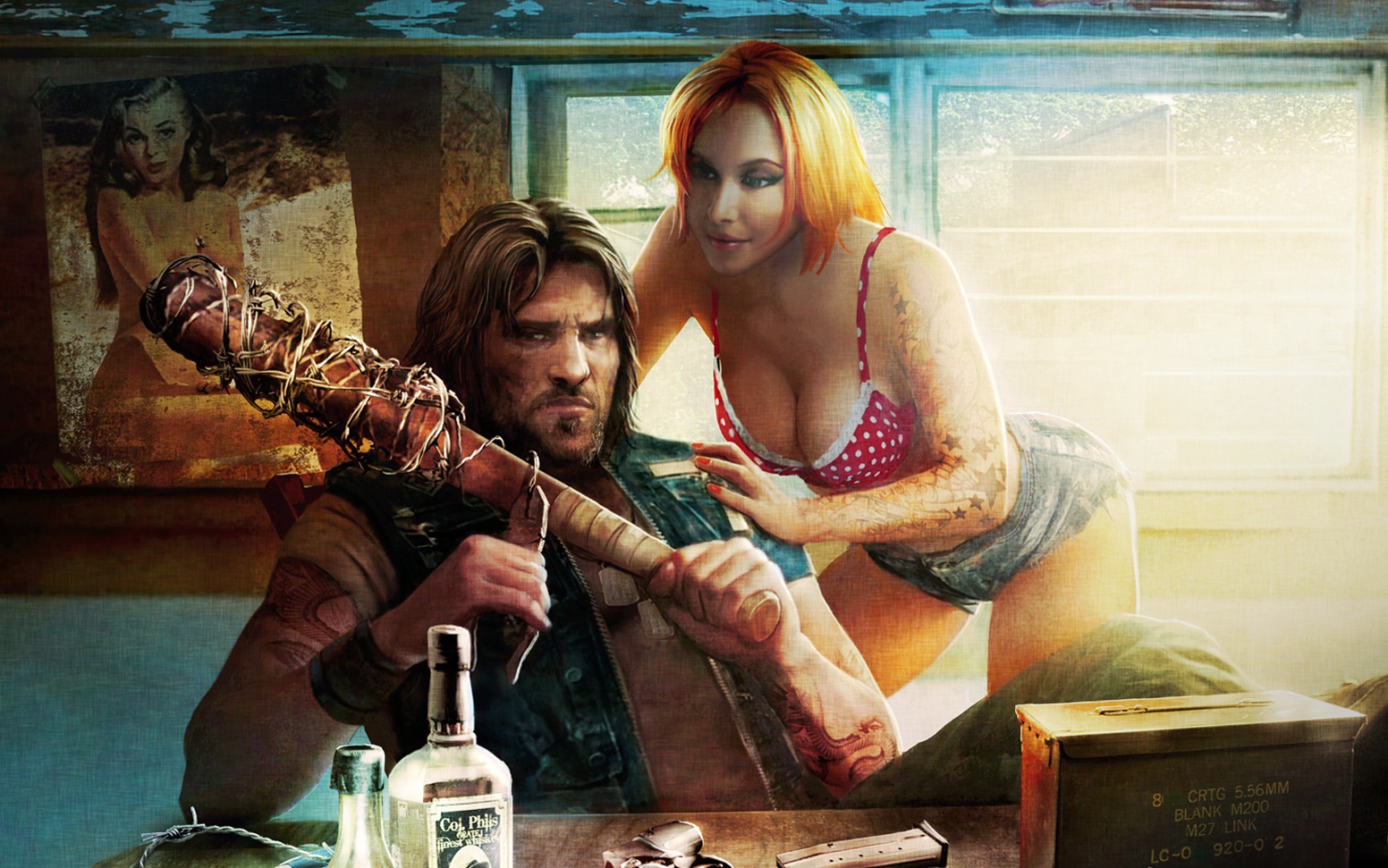 Being a critic can sometimes lead to an odd juxtaposition of games. While your average gamer may play Tomb Raider and naturally progress to BioShock Infinite, I had the privilege of playing The Last of Us before transitioning into…Ride to Hell: Retribution. That’s not to say that I’m holding it against the title by unfairly comparing it; The Last of Us was a special experience that’s rarely obtained in the medium. Instead, I at best had hope for a strange “so bad its good” experience along the lines of Deadly Premonition. But not only did Ride to Hell turn out to hardly be playable, but a dying relic of a time where uninformed gamers could be bilked out of a quick buck from a studio desperate to salvage whatever financial gain possible from a failed project.

The odd thing about Ride to Hell is that it starts off with a glimmer of hope that it might actually be a good game. The main menu has a nice pulpy look to it as it blares Rival Sons’ “Pressure and Time” and the intro has you firing a gatling gun at a bunch of enemies before moving on to a quick time fight and a title card. It seems to signal that the game isn’t looking to take itself seriously, but instead trying to offer ridiculous fun in the vein of a modern-day grindhouse flick. Unfortunately, this hope is short lived until the second a character opens their mouth and you take your first roll forward on a motorcycle. In actuality, it’s a horrendous mess that thinks it’s a decent game. Instead of more licensed southern rock, we’re treated to some awful, generic instrumental rock tunes that range from bad ‘90s grunge to bad ‘70s country rock (even though the game takes place in the late ‘60s). Instead of ridiculous gameplay, we’re presented with some of the worst in recent memory. It’s quite possible that the majority of the game’s budget was spent on securing the Rival Sons song, which also explains why it’s constantly touted in press releases, plays on the official website and appears no less than three times throughout the game.

Ride to Hell works like this: ride a motorcycle to a destination, meet a NPC and get into a fight, ride to another NPC, get into an excruciatingly long firefight, ride back to town. Lather, rinse, repeat. The town serves as the central hub where you can choose your next mission, buy guns and sell drugs. That’s it — it’s a nearly-abandoned old west town with random cars and shacks strewn throughout that can’t be entered and a few non-interactive NPCs. Hell, there aren’t even invisible walls. If you venture out of the main area, a prompt appears that warns you to turn back before automatically resetting you back on the edge. It’s akin to a horrible purgatory or some other frighting Twilight Zone set-up. And in case you thought the whole “selling drugs” thing was a typo, bags of drugs (which look like cocaine) can be picked up from slain enemies and sold to a hippy in the back of a VW Microbus. The drugs have names like Color Crunch, Frosties, Gravity, Exhaust and Desert Grains and do nothing but give you money. This mechanic doesn’t personally offend me, but it seems borderline irresponsible to make such a controversial act a throwaway mechanic for a quick way to gain money…to buy guns.

Great franchises like Road Rash and MotoGP have proved time and time again that motorcycles make for solid gameplay, so you’d think an unabashed biker game would at least be able to feature some fun on a hog, but the horrendous steering mechanics make quick work of that possibility. Motorcycles are incredibly floaty, sometimes barely appearing to touch the ground, controlled only with the analog stick and left/right triggers to break and accelerate. No drifting, no finesse in the response whatsoever — just holding a button and trying not to move the analog stick too much. Alright, maybe that’s not exactly true — hitting the Y button also allows you to powerslide, quickly recovering after skidding under a semi or other hazard. It’s not a game rooted in reality, or even video game reality for that matter, instead creating its own horrible reality where motorcycles are like potatoes. Worse yet, the tracks are boring and repetitive desert highways where there’s a million jumps in the easement and the same exact vehicles always barreling down them. The developers didn’t even get the speed right, as the game inexplicably goes into slow motion mode any time a rival rider pulls besides you and tries to attack — fended off simply by pressing a prompted button. 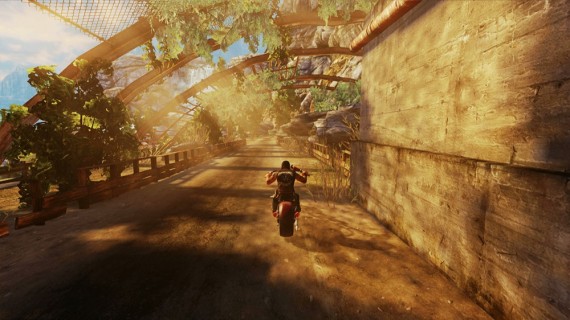 Alas, besides gunplay, practically all other action is handled with quick time events. Hand-to-hand combat consists of hitting A to punch, X to kick or break blocks and Y to block, which makes it an exercise in button mashing. Every so often, a random face button has to be hit to avoid an attack and a finishing move can sometimes be triggered. The finishing move consists of more QTEs and is completely useless as it’s much more complicated than the one last punch the enemy would have needed to be defeated. In-battle animation is dreadful, with your character literally floating between characters with no real use of physics. Gunplay fares no better, with some of the worst aiming I’ve ever encountered. I had to frequently replay scenarios simply because it was too hard to keep the reticle near the enemy.

While the cel-shaded-esque graphic style is fine, everything else is glitchy beyond belief. The visuals are prone to constant screen tearing and character animations rarely render correctly, often switching back and forth between detailed and a glob of play-doh. The mouths of the characters move strangely, making them look like gaping wholes that aren’t syncing up with the voice acting. That’s probably for the best, however, as Ride to Hell features some of the worst voiceovers in a modern game. It’s hard to put into words how bad it sounds, but it seems like one man and women did all the voices, poorly imitating various accents. There’s glitches abound, such as a crucial weapon not rendering after its first appearance, enemies flying around like rag-dolls after being shot and randomly running into walls repeatedly. To make everything just a bit worse, there’s frequent long loading times in between practically any scenery change, which happen quite often.

Ride to Hell: Retribution is an offensive abomination of a game. Once the laughter from its ineptitude wears off, it becomes insulting that Deep Silver thought the game was polished enough to actually produce hard copies and charge thirty dollars for them. We’ll avoid the “worst games ever” aggrandizement, but know that Ride to Hell: Retribution may truly be one of the worst games of this generation. Literally nothing here works: the QTE-filled fighting, motorcycle mechanics, gunplay, voice acting and music and are all some of the worst to come out of a release from a major publisher. A failed project that should have been scrapped, Ride to Hell: Retribution represents and includes everything bad about video games.