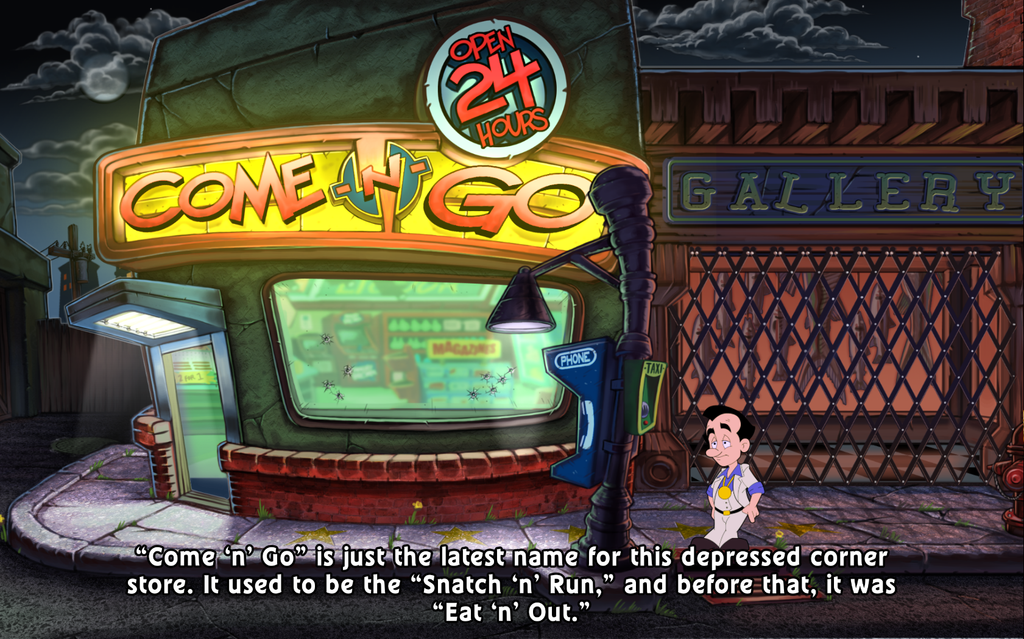 The Leisure Suit Larry franchise has been dead for almost a decade now. The last two games weren’t really Leisure Suit Larry games at all, but monstrosities that paraded around in their skin, forcing the corpse of poor Larry to dance around and hoping grotesquely formed elephant women with weird shaped breasts would be enough to lure long time fans of the series into wasting their money. Luckily, the people over at Replay Games somehow managed to save Larry from whatever level of video game hell he was stuck in and launched a successful Kickstarter campaign to get the funds to remake the original game in the series. While Larry has been nearly comatose for far too long, Leisure Suit Larry: Reloaded is an excellent return to form for the series, and should please both long time fans and newcomers

Reloaded plays like a fairly traditional point-and-click adventure game, although I am fairly certain this is the only series you’ll play where one of the options is to unzip your pants and pee on, flash, or try to sex whatever object strikes your fancy. Those familiar with the original (which I think you could play for PC, Amiga, and abacus) should feel the nostalgia hit them almost immediately. This is the best kind of remake: one that stay faithful to the subject material but isn’t afraid to expand upon the content or correct the shortcomings of the originals. All the enjoyable puzzles return and a lot of the dialogue and story remains the same, but there is just more of everything. 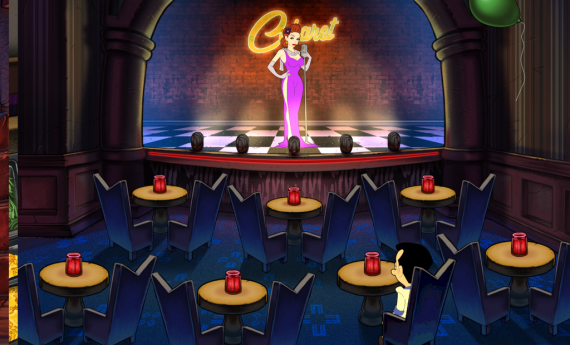 The best part of the classic games in the series has always been the humor, and on that front Reloaded doesn’t disappoint. It is a beautiful combination of crude yet clever comedy, and while there are plenty of low brow jokes about genitals and fart noises, there are some more complex jokes as well. The absolute best part of this game is the excellent interaction between the omnipresent narrator and Larry, and the constant fourth wall breaking and banter lead to more laugh out loud moments than I could count. The disdain the narrator has for the more perverted of your actions is utterly perfect, and you feel like they caught the voice actor right after he finished yelling, “I’M NOT READING THIS. THERE IS NO WAY ANYONE WOULD TRY TO HAVE SEX WITH A MOUNTED FISH!” There are just so many jokes hidden in this game that the humor was legitimately impeding my progress, as I had to lick, fondle, and unzip myself on every single object I could find. It isn’t just as funny as the original; it is much, much funnier.

This isn’t to say the humor always hits the mark. There is an entire discussion tree with a prostitute that I found far more depressing than funny, and I don’t know if broken down, depressed women who hate their job and life are the most fertile ground for slapstick comedy. There is another small joke, an arcade game named “Angry Broads” which functions as an Angry Birds parody that is somehow far more sexist than anything else you find in a game where the specific goal is to have sex with women. Feminists take the role of the pigs from Angry Birds, all fat and ugly because har har feminists are so gross and I was a little surprised at how mean spirited the whole thing was. It is a stupid little aside and it shouldn’t torpedo anyone’s enjoyment of the game (because, lets face it, the Venn diagram of feminists and Leisure Suit Larry enthusiasts isn’t likely to show much overlap), but what struck me the most was how incongruous the whole thing felt with the spirit of the original games. It was always Larry Laffer that we were meant to be laughing at, and his pathetic desperation and constant failures lead to this self deprecating humor that gave the games and the character a tremendous amount of charm in spite of what a sleezeball the guy was. For the most part, this remake does an excellent job recapturing (and even surpassing) what I loved about the original series, making the times where the humor misses even more jarring. 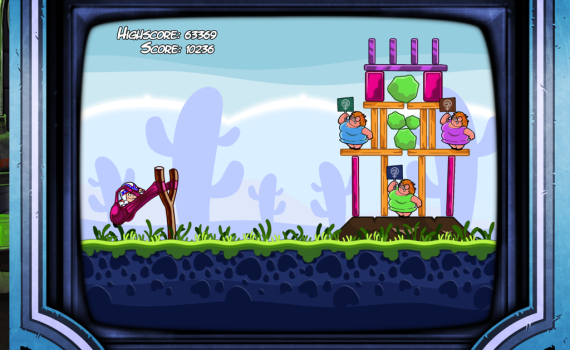 The gameplay is essentially unchanged from the original, and the goal of the game is to somehow help lovable loser Larry Laffer find true love (or at least someone to sleep with him). To do this, you must tackle a variety of puzzles to help Larry woo all the beautiful ladies of Lost Wages. Larry can look at, pick up (or fondle), lick (or smell), talk to, expose himself, or use items on a variety of objects and people in the game. The puzzles are usually fairly well designed, although for seasoned adventure gamers they do fall a bit on the easy side. There are five separate women in this game to try and seduce, and each is nice enough to tell you exactly what you need, which sort of removes the challenge of figuring out what you need to do. There are some interesting puzzles along the way, but a couple of the puzzles are just really laundry lists of things you need to find or collect and the truly challenging ones are in the minority. A lot of modern adventure games rely on highlighting all the objects you can interact with, but Reloaded opts out of this which might frustrate some of the more casual adventure game fans. However, none of the objects are really well hidden or obscured, so there is never a time where you never need to search pixel by pixel to find what you need.

The new and reworked puzzles fit right into the game, and people experiencing Larry for the first time will be unable to distinguish between the old and the new puzzles. There are new rooms to explore, a new girl to try and seduce, and a lot more objects to interact with in the most perverted way possible. A couple of puzzles from the original are also reworked in a way that is more clever and leads to more satisfying solutions, although they might be slightly confusing to veterans like myself expecting one solution that no longer works. The puzzles related to the new girl are well designed and her puzzle set probably surpasses those offered by any of the returning girls. Another nice addition is the inclusion of dialogue trees with all the girls, fleshing out each of them a little more (as if any of them needed more flesh out) and leading to more humorous dialogue options. Even with all this new content, the game definitely falls on the short side for modern adventure games. If you felt like rushing through the game you could most likely complete it in a couple of hours your first time through, but if you take your time and try to interact with every object you can there is a decent length adventure to be had.

The most obvious change here is the inclusion of full voice acting and a completely redone visual style. The sound in this game is fantastic, and the soundtrack here is really strong. The main theme is stupidly catchy, and a lot of the other songs are thoroughly enjoyable as well. The voice acting is excellent and while the narrator steals the show, the work done for Larry, all of the girls, and even the minor characters really adds to the enjoyment. The visuals are much more hit or miss, and while it is a definite improvement over the original they are not as impressive as I had hoped. The backdrops are nice and well detailed, but a lot of the character models look a little off and feel fairly generic. The fight graphic that occurs whenever Larry gets into a scuffle look particularly ugly, like the designers realized at the last moment they forgot to add the graphic and had to cobble something together over lunch. 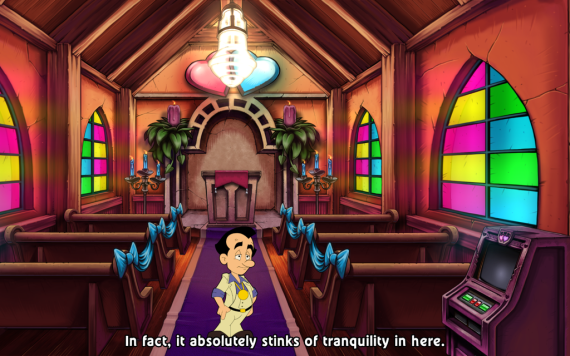 It is hard to feel anything but joy after finishing Larry’s latest (first?) adventure. It is like an old friend came back after years of wallowing around in the mud and experimenting in genres he shouldn’t have been experimenting in. This is a worthy remake that improves upon the original in every conceivable fashion. It is funnier, more clever, better looking and just more fun than the beloved original. They managed to breathe life into a series long thought dead and it’s exciting to think what they’ll do with future remakes. Leisure Suit Larry: Reloaded is just like the original, but bigger, longer, harder and the perfect vehicle for Larry’s second coming.