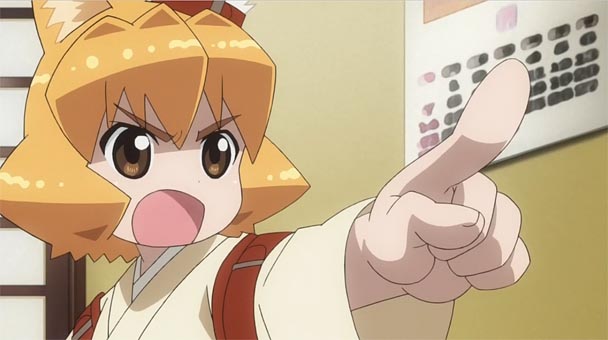 The Everday Tales of a Cat God is one of the latest series to hit Western shores from NIS America. While there are countless anime in the wild, many of which never get localized — at least not on this level — it’s odd that NISA would put their efforts into such a humble, slice of lice comedy like Tales of a Cat God. But despite its unassuming approach, this series is one that is filled with plenty laughs and debauchery. But with the good comes some bad. How does it all weigh out?

The Everyday Tales of a Cat God tells the story of Mayu, a brash god of the feline descent who has been banished to Earth after coming under fire for her various antics and mischievous behavior within the holy realm. Cast down to the mortal realm, Mayu has also been stripped of her powers, only able to use the stingiest of spells from her proverbial grimoire. However, because Mayu is the god of lost items and forgotten memories, her limited set of divine enchantments come in handy on more than one occasion, as those powers actually translate to a relative degree of practicality in the human world. Nevertheless, Mayu isn’t the only god featured in Everyday Tales — in fact she surrounds herself with an entourage of various other gods, some of which are cats as well. 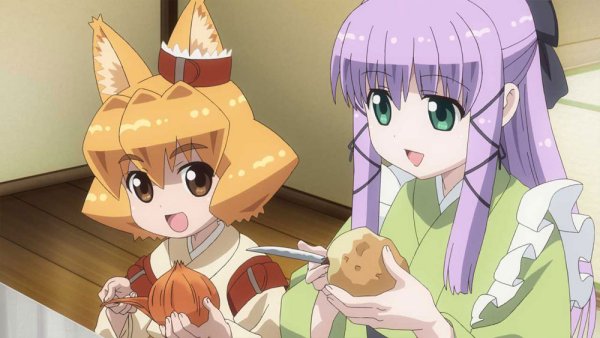 The grouping of personalities is certainly one of Tales’ strongest aspects. Characters are lively and rambunctious, with physical appearances that expertly depict their personalities. By the by, the cast is eclectic and due to their clashing temperaments, provide more than a few laughs in their ridiculous interactions. And really, this is the heart of Tales’ viewing experience. Because the series is set up in a non-episodic manner, it lacks of a core central story. Consequently, each episode almost feels like an extended sketch where the characters have a conflict and must work together to find some kind of resolution. Throughout the process, they face an assortment of hurdles which act as backdrops for the light-hearted comedy to occur. There are plenty of gags, pranks, clowning around and general absurdity that all comes together into a brilliant concoction of humor that is at times laugh-out-loud funny. Some of the goofiness may only hit the “slight chuckle” level (and sometimes failing to hit the mark entirely), but by the by, the humor here is genuine and divvied out in hearty portions.

Part of what makes the show such comedic gold is the wonderful translation work. It’s been a while since I’ve seen a subtitle job done this effectively. The writing is crisp with punctuation that makes line deliveries all the more humorous. An anime comedy can really go south if the localization efforts are half-hearted. Fortunately, that is never once the case with Cat Gods. 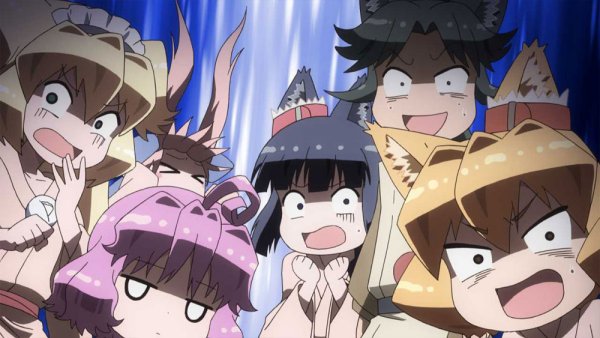 Disappointing, then, is the fact that the silly nature of the show often overshadows other elements such as sound character development. The truth of it is the majority of the cast in Tales is grossly under-realized. With the exception of a few scenes that flesh out the human girl who Mayu lives with, Yuzu, there is hardly any type of real emotional connection to the lot. This ultimately makes the show feel more like a slideshow of funny scenes with caricatures as the stars, rather than rounded out personalities. As a slice of life series, however, this can be somewhat forgiven, but when put side-by-side with other like-series such as Galaxy Angel, Love Hina or even Sakura Diaries to a lesser extent, it pales in comparison.

Nevertheless, the low-key tone of the show as a whole will be appreciated by those who aren’t looking for a series that requires much of a commitment. Because episodes are kept light and fluffy, and due to the lack of needing to understand complex characters, Everday Tales of a Cat God is an extremely easy watch. The breezy, don’t-take-things-too-seriously pitch of the show makes it a good supplementary series, or show that viewers pop in from time to time, never in a rush to get to the end of its twelve-episode run.

But The Everyday Tales of a Cat God is more than just its story. It’s a rather pretty series with a color palette that’s vibrant and lush. Line work is smooth and the clarity of picture is what we’ve come to expect of anime in high definition. The variety of set pieces all look wonderful as well with characters interacting with them frequently, making it feel like their actually part of the world they’re in, rather than just on some kind of stage with a host of props.

So Tales of a Cat God looks good, but it doesn’t aesthetically please like it does acoustically. The soundtrack, especially the closing theme, is incredibly bouncy and fun, adequately capturing the charm and spirit of the cute little show. Even aside from the opening and closing tunes, the music throughout is just all-around a treat to listen to. It isn’t going to break new ground, but it surely will plant itself firmly in one’s head for a few days. The audio outside of the OST is solid and remarkably crisp, too. There isn’t an English dub in sight, but purists (who are probably the ones willing to search out this somewhat niche show) won’t mind that.

If consumers decide to pick up NISA’s premium collection of the game, they will be treated to a few extras. For starters, there’s an OVA episode that takes place post-series for those wanting a bit more of the story and characters. On top of that, there are seven mini-episodes for shorter viewing experiences. And lastly, there’s a hardcover art book that’s really quite beautiful. The book is arranged as if a scrapbook and is in full-color with plenty of sketches, images and a complete episode guide. 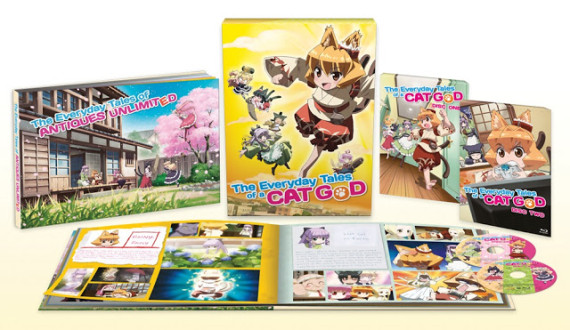 The Everyday Tales of a Cat God doesn’t revolutionize the slice of life genre. In fact, it plays it safe most of the time and gives us character archetypes that we’ve probably seen many times over. But, where it may lack in innovation, it makes up in its delivery of adorable characters as well as genuinely clever and humorous dialog. Tales of a Cat God is a charming, though short, series that wants its viewers to have a few laughs without needing to invest much time or energy into watching it. It’s a show that understands its limitations and never tries to be anything more than an enjoyable distraction from the more serious anime contenders out there. Although Everyday Tales of a Cat God may not break the mold, it’s no less a series that is light, carefree and most of all, fun.