Shin Megami Tensei IV has some big shoes to fill. Not only has it been almost a decade since the mainstay series received a new installment, but Nocturne was just a solid JRPG through and through when it was released in the early 2000s. With the bar set high, and plenty of hype surrounding the title’s arrival, gamers will be expecting a lot out of SMTIV. But do their hopes line up with the reality of what Atlus has delivered?

Shin Megami Tensei IV throws players right into the thick of its story. It wastes no time with a plodding introduction, rather giving folks a basic premise and lets them hit the ground running. Essentially, SMTIV tells the tale of a young fledgling samurai named Flynn and his exploits in the medieval, fantasy-esque country of Eastern Mikado. Flynn has recently been chosen to become a proper samurai after he demonstrates his adeptness and unique powers in a coming-of-age ceremony hosted by the kingdom. Over time, he meets various compatriots and they find themselves locked in a war against evil-doers, demons, archangels and, depending on the choices made during the excursion, even God himself. While its narrative isn’t earth-shatteringly distinctive, it’s no less expertly maintained through the utilization of well-crafted characters and adventure hooks that possess that very particular hint of Shin Megami horror intrigue. 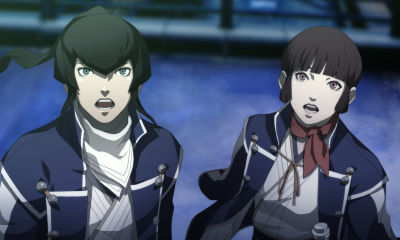 The cast of SMTIV feels like true quality. Personalities are unique and varied, making for an assortment of situations and interactions between troupe members. While the writing and development does an overall nice job of steering clear of JRPG archetypes, it nevertheless falls into a few trappings that will surely have some rolling their eyes with righteous indignation at the predictability of it all. On the front of clichés, the story occasionally takes a turn down been-there-done-that lane, putting on parade the usual narrative suspects that include rising up against traitorous angels and other contrived story twists that aren’t all that surprising due to the writing team’s tendency to telegraph big plot reveals. By the by, though, the tale maintains a brisk pace throughout and is filled with enough mystery that makes getting from one angle to the next all the more tantalizing. The dark tone of it all sure won’t hurt its curb appeal either, especially with those gamers out there looking for a more mature experience. It never lays on unnecessary amounts of gothic imagery, and never feels as unsettling as Nocturne, but it’s no less sinister in its own way, creating a post-apocalyptic setting that feels unnerving at times and fascinating at all the others.

But Shin Megami Tensei isn’t a series that folks play just for its narrative value. In fact, between the generally compelling story scenarios exists the main course of the meal: combat. Tensei IV takes less influence from just one of its predecessors by placing an emphasis on gameplay that feels like a mix of Nocturne and the series’ DS cult-hit, Strange Journey. For starters, the majority of SMTIV’s experience takes place in its third-person dungeon delving. Expansive labyrinths of dizzying size carry players from one area to the next, serving as the title’s backdrop and giving way to a healthy dose of exploration. Part of what makes SMTIV so enthralling is its ability to forge environments and dungeons that are grand in scope, with plenty of nooks and crannies to uncover. In this aspect, though, MegaTen IV is no different than its ancestors. 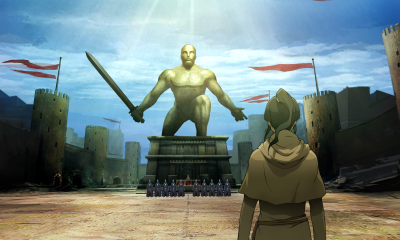 Where it differs from the pack, then, is in its integration of non-random battles. A first for the series, SMTIV makes it so that players can actually see the enemies they will encounter. This contributes to an extra layer of depth to the already rich combat by introducing the element of pre-emptive attacks. While running around in dungeons players have the ability to mash the attack button to perform a melee strike. This specific attack grants folks access to being able to run up to baddies and slice them for the opportunity to initiate combat maneuvers first. Naturally, the reverse can occur with enemies bum-rushing unsuspecting travelers, making simple dungeon navigation an exercise in quick reactions and white-knuckled, first-hit assaults.

Once the battle has begun, the game takes on the standard Shin Megami Tensei first-person view. Encounters are turn-based, with players having to flip through a compendium of tactical options so that they can choose the right attack to effectively vanquish their foe. But plowing through combat on autopilot won’t win many battles in Shin Megami Tensei IV. This is a game of understanding team dynamics, as well as enemy strengths and weaknesses. MegaTen IV is like its forerunners in that it requires exploiting assailants’ limitations, meaning to say that knowing the elemental vulnerabilities of every adversary, from the largest one down to the seemingly most insignificant, as they all can wipe a party at the drop of a hat. Without being able to capitalize on these weaknesses could mean certain death, making the game a truly difficult one. It’s certainly not the hardest title in the entire franchise, but it’s not exactly easy by any stretch of the imagination. Fortunately, because of how all of this is explained, along with the set of difficulty options, Shin Megami Tensei IV might actually be the most accessible game of the bunch, but even still, will put hair on the chest of its players. There is a save anywhere option, thankfully, making the steep learning curve seem less intimidating — a feature that newbies will come to love instantly. (Pro tip: save often.) Nevertheless, as if MegaTen IV’s combat wasn’t already nuanced, it also introduces the Grin system in its combat, which is something of an extension of understanding enemy weak points. When any of the combatants hit their opponents with a critical attack, or manipulates a weakness, they enter a Grinning condition. Grinning increases both dodging and damage output exponentially for a single turn. This is a wonderful way to make short work of a demon, but regrettably, it’s an excellent way for a monster to make short work of the player in return, as enemies can enter a Grinning state as well. Needless to say, when all of the aforementioned aspects come together, it produces delightful combat encounters where every attack matters. To execute this kind of urgency and importance in almost all battle scenarios is a feat that Atlus should be proud of.

Although these fights will form the core of the campaign, there’s also another feature that is integral to the experience: demon fusing. What would a Shin Megami title be without capturing demons and then fusing them together to create even more powerful monstrosities? As in all of the games, the catch-em-all mentality is at its apex in SMTIV, establishing an addictive quality to the game that will have folks scouring every surface they can in hopes of finding just one more demon. Capturing these creatures is handled in the same way as it almost always has been in that negotiating mid-battle is the only way to convince them to join the player’s ranks. While the answers to the questions demons pose still feel arbitrary and backed by no true logic, it’s still a fun mini-game that had us crossing our fingers on more than one occasion in desperate aspiration that the demon in question would convert to our side.

Outside of the dungeon crawling there’s the character customization, allowing folks a host of ways to create the exact type of fighter they want, what with being able to assign stat points upon reaching a new level to one of five attribute area, and towns to discover — though I use that word “discover” lightly here. Whereas in most JRPGs players can run amok in the town’s streets, taking in the lovely sights and sounds, things in SMTIV are relegated to a menu. Want to visit the inn? Click the inn button and viola, the characters are there. This linearity prohibits full immersion; however, veterans of this kind of JRPG sub-genre will be used to it as other similar titles such as Etrian Odyssey and Unchained Blades implement the same type of system. Outside of the gameplay mechanics, Shin Megami Tensei IV has some pretty sound production values. Environments, characters and enemies in dungeons are all rendered in 3D, while enemies in battle take the shape of animated sprites. Their bright hues really pop amidst the rest of the game’s grey and brown overtones, and in fact, when the game opens up and shows off its more vivacious aesthetics, it looks magical, with its strong art direction. There are some muddy textures, anti-aliasing issues and an intentionally muted color palette that comes off as unintentionally oppressive, but nevertheless, it looks fairly nice when in motion. It’s a shame then that the character portraits used during talking segments only consist of a handful of variations. This makes it hard to empathize with the cast, as the small number of portraits limits the range of emotions they can express.

The soundtrack in the game is also mood-setting, bringing the world to life with its diverse jams. There are sweeping scores that radiate enchantment, head-pounding techno tracks as well as dread-inducing dirges that make the creepy atmosphere feel all the more disconcerting. It’s an eclectic, cornucopia of arrangements for sure, but one that can take players on a bit of an emotional roller-coaster ride. At the same time, it’s also an OST that is easily forgotten as a standalone piece. The tunes certainly serve their purpose, but there was not stand-out track that left a lasting impression. 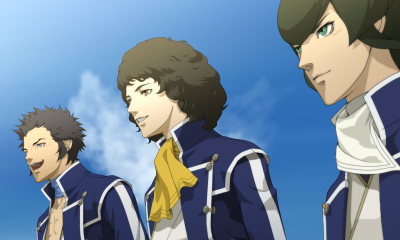 Shin Megami Tensei IV manages to meet its hype in some respects and fall short of it in others. Its combat is stronger than ever, adding in components that are deep, unique and reward the strategically-inclined, while the character customization options will excite those who like to build their ideal fighter. Its lacking in production values, however, and seems to play its approach extremely safe with mechanics and aesthetics that are tried and true, but no less uninspired. Its story is also a bit of a mixed bag, adjoining new ideas with outplayed ones. When taking it all into consideration the ultimate question becomes: was it worth the nine year wait? Not quite, but that doesn’t mean it’s any less wonderful, because this is certainly one of the better JRPGs on the 3DS.