Being an RPG junkie has left me with an addiction that’s very difficult to satiate. For every noteworthy roleplaying experience, there are tens of lackluster journeys I could care less about. I’ll sit through all the RPGs I start, though, simply because I am a curious soul. However, there’s one curious journey I’ll never forget. Let’s set sail with a look at Defenders of Oasis, released for the Sega Game Gear in 1992.

Defenders of Oasis holds the honor of being one of the very first RPGs I was introduced to. Unlike most gamers, I didn’t get my first taste of RPG basics with Final Fantasy, though these days I am an enormous fan. While our Nintendo library included staples, we had never purchased the title. Instead, later on I was given a Game Gear with a starting roster of Slider, Sonic the Hedgehog 2, and Taz in Escape From Mars, along with Defenders of Oasis. The graphics were vibrant and colorful, compared to the Game Boy back then, so my little eyes were delighted to see something so different. 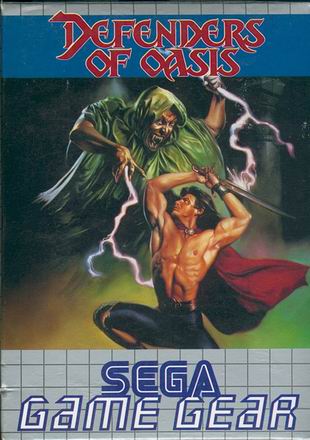 Defenders in its purest form is a great little traditional RPG. It doesn’t break the mold, but then again, it doesn’t really need to. It has a heavy Arabian-styled flavoring that is rare to see in more recent releases, which was refreshing both then and now.

Stepping into the shoes of the Prince of Shanadar, you wake up one morning to do a bout of exploring. Just a typical day living life as royalty–except on this day, a princess is coming to visit. In the library (where I’m sure I would go first off if a young eligible princess were visiting), the Prince digs up some important information about the civilization he will one day rule. According to the ancient texts, there once had been an evil sorcerer by the name of Ahriman who ruled Shanadar and its neighboring countries. In true RPG fashion, a hero had risen (Jamseed) to both vanquish and seal Ahriman into some magical dimension. To do so, he utilized three magical rings as well as a genie. With that, Shanadar rose to the rank of King of Shanadar. The magical genie’s lamp was thrown into the basement (in case of Ahriman, break glass) in case it were to be needed in the future. The three rings were kept and shared, and I’m sure you can guess where this is going. 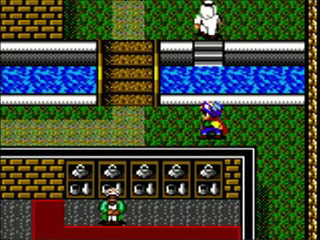 Later on in the night, the Prince is woken to find that Shanadar is under attack by the Empire, and is given the second ring from his father to “guard with his life.” With that, the adventure begins.

Defenders’ gameplay is nothing new. There are random battles, and there is a ton of level-grinding. However, in battles, the enemies do not move. While enemy portraits are stunning and well-drawn, there is little to no action onscreen. It can get a little tedious staring at a static portrait of an Arabian thug, but with the title’s stunning 8-bit graphics, you can easily overlook the fact that the battles seem quite stationary. When I say stunning, I definitely mean so. It featured some of the most vibrant graphics possible of the 8-bit era, with colorful and loud character sprites making their way along gloriously detailed landscapes.

One of my favorite aspects of the game is its save system. Even when you would accidentally turn the game off (younger cousins, anyone?) or when the Game Gear would run out of juice, the game would save, preventing you from frustration in the future. Of course this had its pros and cons, as you could not cheat the system by turning the system off. I would never do that, but I’m sure there are those out there who like to use the save/load system in Enchanted Arms to earn chips with the roulette because I, er, they can’t afford the Golems otherwise.

Defenders of Oasis was and is a completely solid RPG. It’s so easy to pick up and play without ever having had enjoyed a similar game before. As said previously, it doesn’t redefine the genre, but what it does, it does so well that it’s a great play. If you’ve never heard of it before, try securing a copy. It does wonders for long car rides or plane trips.