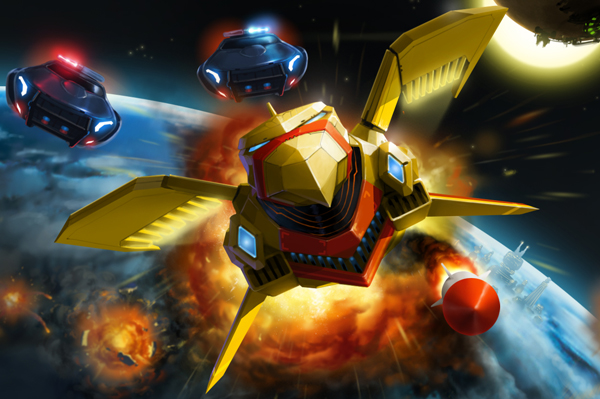 Euroshmup isn’t a word that brings smiles to the face of the average shooter fan. Enemies take a little too much to kill, life bars allow for areas that are overly crowded with clutter, and the difficulty curve tends toward utterly broken. Humans Must Answer it a classic horizontal side-scrolling Euroshmup, and to get any fun at all out of it you’ll need to have grown up learning to love its particular kind of shooter.

The basic plot is that chicken-aliens are investigating the solar system due to Reasons, blasting their way through to see what’s been going on here. It’s a premise that aims for humor but isn’t particularly funny, but that’s fine. It’s a shooter, the point is to take out waves of enemies and bosses in interesting locations.

After the first couple tutorial areas, though, Humans Must Answer becomes a game of memorization rather than blasting. At the start of each level you can go shopping for weapons, trading out old ones for new and unlocking more goodies as you find the eggs hidden in each level. The problem is that success quickly requires getting 100% of everything in order to be properly powered up, and even then it’s going to take a lot of memorization to get through a level. Upgrading one of the two basic guns and affording a large enough energy reserve (or ammo for the other one) is frequently an unpleasant choice. The alternative is to play the stage over and over again until you can squeak through only firing when absolutely necessary, hoping the payout is good enough to buy enough gun for a more thorough attempt later.

Humans Must Answer does, however, get the “pretty scenery” aspect spot-on. While most of your attention will of course be on the foreground, the backgrounds look fantastic. Whether flying over a city with the sun peeking through a cloud bank in the red skies, or past Saturn with giant platforms looming over its gaseous surface, Humans Must Answer has some nice backgrounds to destroy things over.

But then you fly along trying to both conserve firepower while simultaneously destroying waves of enemies, releasing drones that temporarily release a stream of firepower on one section of the screen while you take care of business on another, and the ammo reserves are shrinking. Lasers are weaker but draw from a slowly-regenerating pool while guns are stronger but have limited ammo, and of course you’ll need to memorize where the power-ups on a level are to avoid running out of blasting power. Because when you’ve got a ship that’s only slightly faster than a walrus, enemies that take a bit more of a pounding than you’d want them to in order to be dispatched, and are trying to remember whether it’s the left or right trigger that releases the laser pod rather than the gun pod, it’s always fun to worry about the ammo gauge.

Humans Must Answer is a pretty shooter with its own style, but it’s also more than a little frustrating. The amount of memorization required to progress is far greater than you’d get by naturally replaying the levels, and the slow ship plus ammo limitations leave you wondering how the chicken-aliens ever managed to get to our solar system, much less complete their quest to shoot their way to the sun. To be fair, however, Humans Must Answer is a good example of a specific sub-genre of shooter, but it’s just not one that happens to be much fun.