It’s easier to point at a demo and say “Go play this!” than to describe it, and usually it’s the lazy way out.  In the case of Monochroma, however, it may be warranted.  Monochroma is a lovely puzzle platformer in black and white and red, in which you’re a young boy carrying your brother past all manner of terrible things.  Your brother is fine at game’s start, and you chase along after him as he flies a cheerful red kite, but pretty soon he’s got a sprained ankle and the grey rain is coming down.   You need to carry him to a goal that I can only assume is home, but his weight means you can’t run as fast or jump as high while he’s on your back.  You can put him down to solve the puzzles that require extra mobility, but only in well-lit places. 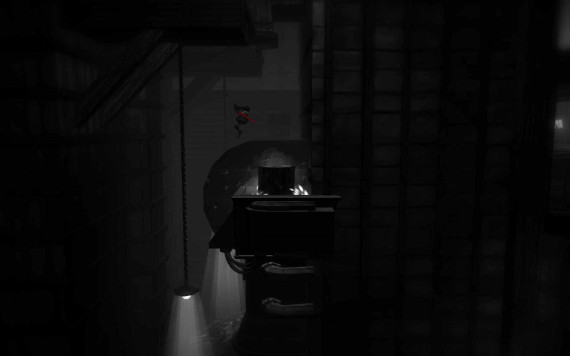 Despite the pleasant beginning (in a foreboding grey playground), things quickly go dark as you run through desolate fields, barns, factories, and other places that get stranger and more dangerous.  The demo is a good chunk of gameplay that should take about half an hour to complete, and there’s even a few secrets to go snooping after.  The puzzles are physics-based, and while this coupled with the black and white presentation makes for a cheap comparison to Limbo, Monochroma has its own clear identity even in this early state.  It’s an art-platformer, no question, but the demo shows that the gameplay is getting as much attention as the atmosphere.  It’s available on Windows, Mac, and Linux, and if you liked it anything as much as I did the demo should easily wrest a donation to the Monochroma Kickstarter campaign.