With the adventure game genre being sprung back to life after its near death due to games like those by Telltale, it serves as little wonder why many indie developers have decided to once again begin creating ambitious games in the genre. Face Noir is one of these games and it seeks to place you in a seedy world to relive the classic Noir films of days gone by. Unfortunately, what we have gotten is actually a game with several frustrating gameplay features, characters that the writers tried far too hard to make memorable and an odd combination of graphics in what can only be described as an unremarkable, average adventure game.

You play as Jack Del Niro in a plot that features many twists and turns and as such is hard not to ruin. What can be said, however, is that nobody can be trusted and it’s up to you to try and figure out the truth by any means necessary. The story seeks to borrow from all of the classic Noir tropes and blend them into one partially successful storyline. You do want to find out what happens and the mystery is set up quite nicely to keep the player going on to discover what happens. Aside from Jack, however, the characters are often obnoxious and the dialogue outright boring. An example can be seen from the game’s opening, in which asking a hotel receptionist one minor question leads him onto a five minute tirade where you find out his family history in excruciating detail. We shouldn’t compare classics to new offerings, but if we compare Broken Sword, then it becomes clear that Face Noir really isn’t anywhere near the same level. In Broken Sword characters didn’t need to go on long monologues to make us remember them and to connect with them, instead clever and witty writing was all that was needed. Face Noir has characters talk for so long that you give up caring at all and it’s clear that they were just trying too hard to make characters memorable. 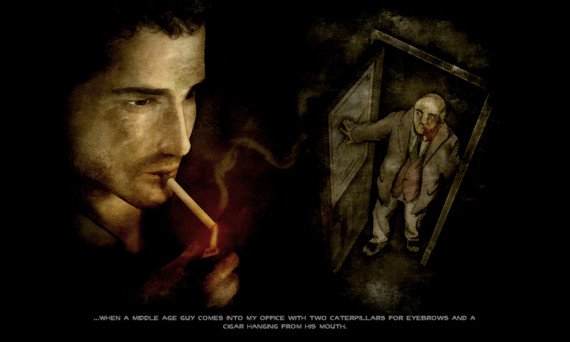 When it comes to carrying out actions, the UI is easy to use if slightly unoriginal but the most intriguing aspect of gameplay is without doubt the deduction board used to create new branches of dialogue by putting together all of the clues. Along with an innovative 3D inventory, this is the area where we could see the most potential in what could have been in this game and it’s a shame that the deduction board is underused as it could have served as an interesting feature that sets Face Noir apart from the many other games released in the genre. The cursor in the game is tiny and players will find themselves struggling at times to find items due to just how precise you have to be when choosing an action. Indeed, gameplay as a whole is extremely frustrating and only gets worse as Face Noir continues.

The graphics within Face Noir are all over the place with the backgrounds being lovingly detailed and created and are very impressive for a game of this scale. The same can’t be said for the characters that look like they’re from a PlayStation One game and not in a good way. The lips move up and down but they don’t match the words, making for an eerie and jarring effect of the characters looking, well, like they’re in a video game. This is okay if it was the intended effect, but for a game so focused on realism it clearly wasn’t and served to take this reviewer out of the game every time there was a close-up. 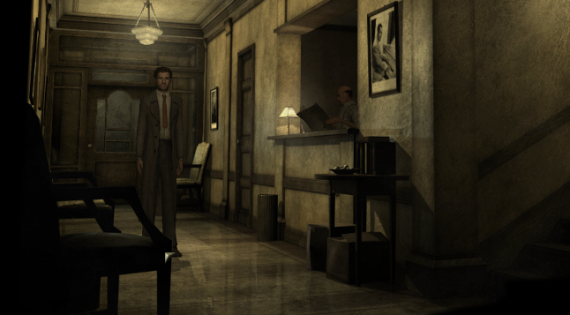 As a whole, Face Noir is a forgettable disappointment. Nothing stands out or inspires discussion other than its inherent blandness. With boring dialogue that drags on too long, bad facial animations and frustrating gameplay, even the most committed adventure game players will have a hard time staying involved. There’s potential for something interesting here, but Face Noir simply isn’t worth your time to play.