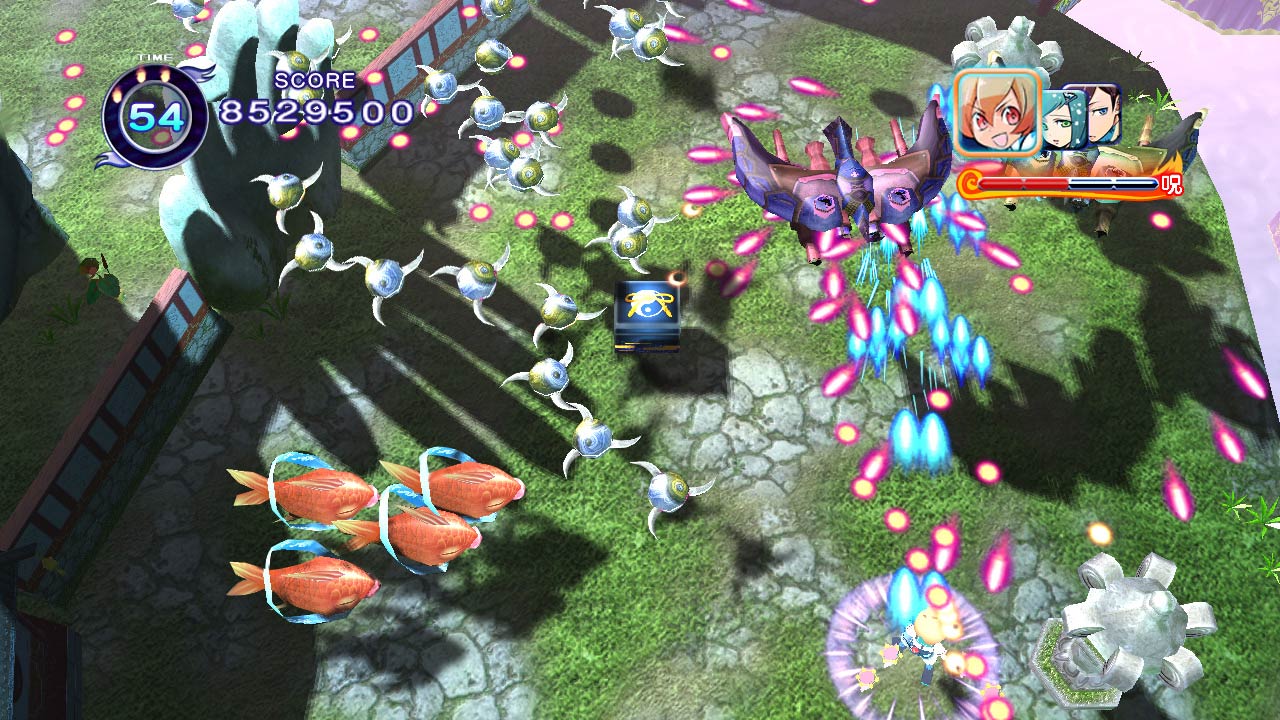 Shoot-em-‘ups are certainly one genre Japanese developers excel at, with the excellent and indomitable Ikaruga as proof. Mamorukun Curse! is a shooter that travels the same path as its hallowed predecessor, having been developed by G.rev, a developer partly responsible for Ikaruga. The two games are, of course, drastically different in tone and content, but the austere challenge is still there in full force. Mamorukun Curse! is an adorable yet satisfyingly difficult top-down shooter that offers plenty for its $20 price tag.

The world of Mamorukun Curse! is a colorful, hyperactive anime-styled wonderland with cutesy menus, characters, and environments. From the first bubbly exclamation by the Japanese voice cast as you settle on a character, you can tell you’re going to be in for one sugary ride. There’s a glut of content to explore here, so be mindful of toothaches! The full Japanese version of the game is included in this package, complete with all the DLC that was released prior to its American localization. You may choose to play Arcade mode, Netherworld Adventures, and Story Mode, all packing additional characters and costumes for the seven main characters. Like most shooters you can track your high scores on the online leaderboards, and you can peruse the gallery for art unlocks as you progress through the game.

Story mode finds you zooming through the semi-nonsensical narrative, which utilizes all five available player characters. The plot is mostly throwaway, though extremely cute in all the ways only a moe-centric shooter can be, but you’ll probably find yourself skipping through lines of dialogue to jump into the action before long. Gameplay is standard fare: shoot everything that moves, because everything is trying to kill you. Each of the playable characters has a different bullet pattern, though where things get truly hairy is when you invoke magical Curse Bullets.

Curse Bullets add another layer of strategy to what would otherwise still be a run-of-the-mill bullet hell shooter. You can place these extremely useful “curses” across the playfield, affecting you or your enemies — if you’re cursed, you’ll find your firepower augmented beyond belief, going so far as to shoot in all directions simultaneously with some characters. On the flip side, you can slow down your enemies, but their bullet patterns will change as well. I found it was in my best interests to use the bullets to give my character superpowered attacks to cut through the endless barrage of bullets. Being hit just one time in Story mode is an instant kill, and you’re forced to go on to your next choice, so anything you can do to prolong death’s icy grip is useful — even on lower difficulties, which are still genuinely punishing.

Smaller enemies are minor annoyances, but no matter which mode you choose to engage, there are plenty of minibosses and larger encounters to keep you on you toes. Choosing characters that complement each other’s strengths and weaknesses is the only real way to succeed, as well as maximizing Curse Bullet benefits. It’s an addictive mix of strategy and skill that belies its whimsical exterior, especially when you realize simply spamming your stream of bullets against oncoming threats isn’t the key to victory. Funnily enough, that’s one reason Mamorukun Curse! succeeds — it forces you to rely on other tactics and adapt to the game. You tend to become better as you continue to tackle each mission after a swift death. It’s a diabolically cute challenge, and when you conquer Story mode, you can come back for more interesting levels to appease that inner bullet hell lover. Though the game itself is fairly short, this provides the longevity it needs, and propels it from simple curiosity to must-play top-down shooter, especially for genre fans.

Mamorukun Curse! is an exciting, frenetic time, especially for those waiting for localization of the popular Japanese shooter. It’s a hefty price tag to be sure, but it serves up hours of challenging fun and plenty of unlockables for those skilled enough to look for even more to do after the game has been completed. If you’re looking for a new shooter to add to your collection, you could do far worse than this.