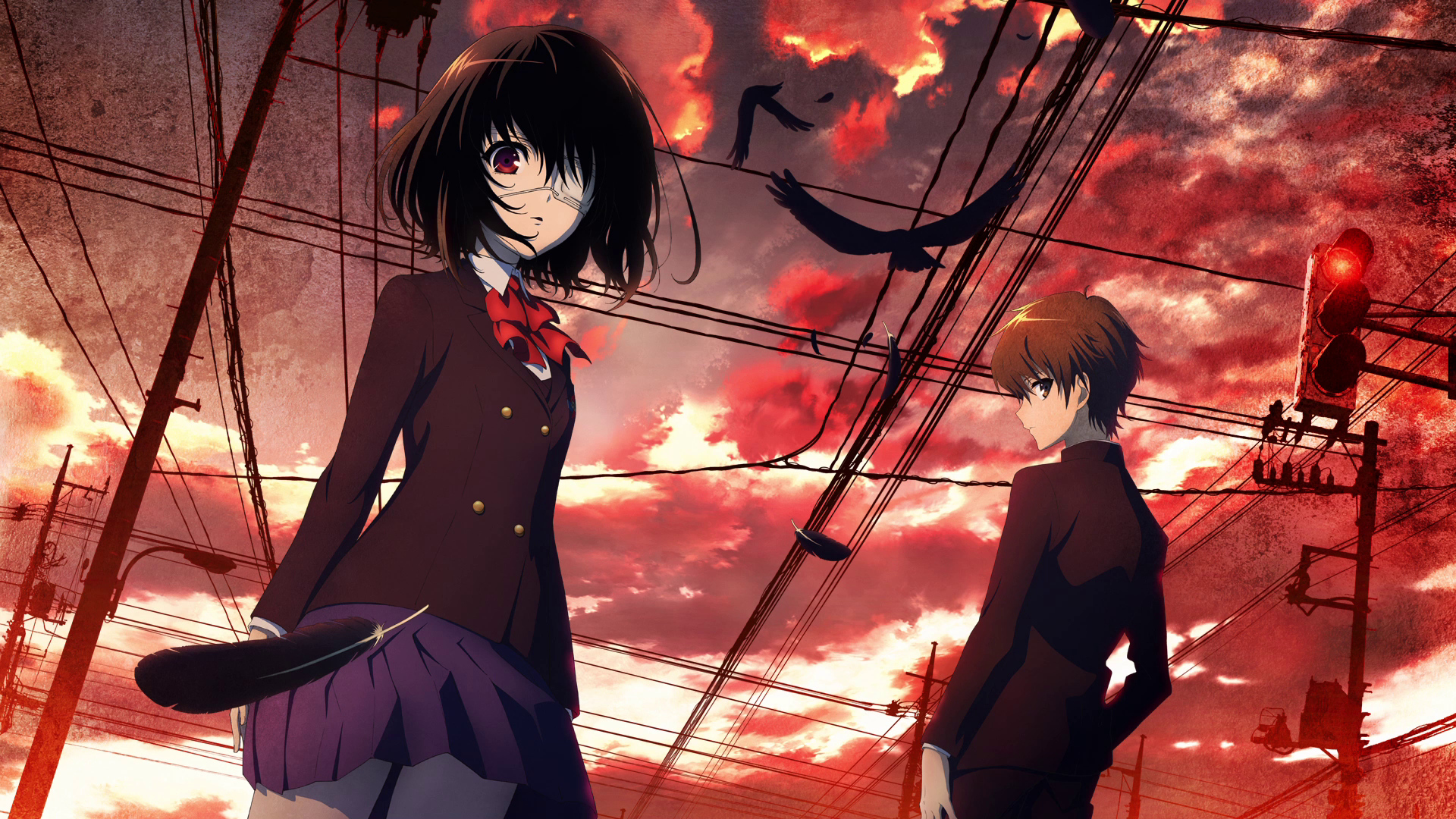 P.A. Works’ horror-thriller Another is an anime that can be called many things. Unfortunately,  “great”, “good” or even just “okay” are not among them, as this is a series that’s frightening to watch for all the wrong reasons. Does the piece have any redeeming qualities, though; that’s ultimately the question on which we must focus when it comes to Another.

26 years ago, there was a third-year classroom of a middle school in the town of Yomiyama. In this class was a student by the name of Misaki. As a top honor student and sports star, the amiable boy was one of the most popular kids among his classmates. Because of this, when the young teen passed away suddenly and without any type of warning, his classmates decided to carry on as if he were still alive until their graduation. Then, in the spring of 1998, Kouchi Sakakibara transfers to the very same class, and begins to grow suspicious of the fearful atmosphere in his classroom. Interestingly enough, there is a beautiful, yet stand-offish girl named Mei Misaki, who wears a mysterious eye patch, that seems to be at the center of this strange climate. Her peers don’t talk to her, she skips school often and on the occasions where she does show up, she is withdrawn from the other students, constantly alone and caught up in drawing pictures. Kouichi tries to befriend the aloof gal, what with being a transfer student and all, but his attempts fall short as she seems despondent and wary of anyone talking to her. It’s only over time, after students in the class, and those closest to them, begin to die in horrible ways that the two form some semblance of a relationship. Of course, they eventually start to uncover the secrets behind the string of untimely deaths that dates back almost three decades. In doing this, there are plenty of twists and turns that will hope to leave viewers wanting more — regrettably, those story hooks never deliver.

Let’s get this out of the way now: Another‘s premise is strong. In fact, it will be strong enough to pull in viewers and passersby through its promise of delivering a genuine horror experience in anime form alone. In that regard, the title is something of a standout series because the truth is, there aren’t many genuine horror anime series out there. Consequently, folks looking for some gore-tacular fun will probably turn to this to get their fill. It’s too bad, then, that they will be disappointed by practically everything, especially with what the show has to offer in the way of a plot. One of the biggest crimes Another commits is its unwillingness to ever show viewers the depth of its characters. The cast is large, yet audiences will be kept in the dark about most of their personalities, internal struggles and overall quirks. In fact, the characterization is so weak that the show becomes hard to watch after a while; the characters just don’t feel like real people — they don’t act like people actually act and they say non-real lines throughout the entire show. In truth, the characters are more akin to talking props, sputtering nonsense just to move the plot forward, than life-life people. 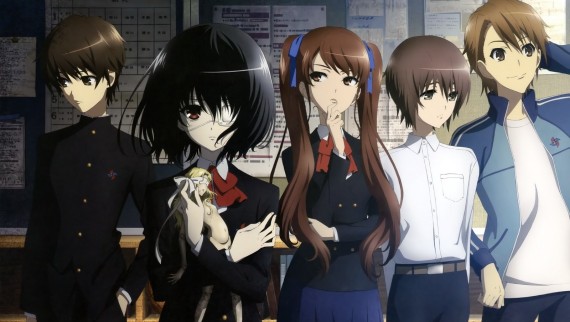 This would be somewhat forgivable if the narrative at large unfolded in an interesting, coherent way. But it doesn’t. To say that the story is convoluted and as a result difficult to follow would be an understatement of epic proportions. The series seems to pride itself on leaving viewers confused for roughly seven episodes before finally explaining just what the hell is going on. It’s during these initial hours of doling out ridiculous plot points at a snails pace that viewers will realize how recherche the story really is — painfully so that they may undoubtedly stop watching the series altogether or convert to some kind of religion in order to ask their creator why they would bestow such an atrocious experience upon them. While the latter statement might sound like melodramatic hyperbole, the mere fact that the show has to go over its unveiling’s multiple times, in multiple episodes, speaks to just how insanely absurd and labyrinth-like the writing really is. Truly perplexing stuff, folks — and we don’t say that with any type of positive innuendo at all.

Kouichi is perhaps the worst culprit of these character development offenses. Sadly, he’s the show’s star and because of this, the one and only character that means anything is unrelatable in all ways to those watching. This is no thanks to some poor voice acting, sure, but it’s mostly due to his inability to come off as a sympathetic hero. He falls into many of the same trappings as thousands of other teen protagonists in anime, which doesn’t help his cause in the slightest; he is naive beyond believability and behaves in impractical ways. The rest of the personalities do the same thing, coming off as dim-witted and just plain stupid. At all times are you reminded that you’re watching a horror series, as the eye-rollingly pathetic stereotypes are fully on parade here.

That being said, there are a few aspects to Another‘s story that are genuinely fascinating. The first two episodes, while confusing, are especially well-scripted and do a nice job at leaving viewers on the edge of their seats. Because all of the bad that embodies Another has yet to come out, in the beginning viewers can just enjoy what’s happening without engaging any type of internal monologue that’s filled with expletives as to why the events happening on the screen are as serpentine as they are. In fact, the storytelling conventions in general during the first few episodes feel strong and full of ambition, making folks think that things are headed in a delightful direction. Perhaps that’s what’s most disappointing about the show — it has so much potential but never figures out how to capitalize on it, invariably leaving its viewers in this weird flux-like state where they want to like the thing, but simply can’t due to the amount of glaring problems that plague it from top to bottom.

And then we get to the horror elements. Certainly this is a series that touts its horror roots and at times holds true to these influences, managing to produce some suspenseful moments and decent payoffs. More often than not, however, it doesn’t deliver on its implications. It will build a scene to a climax and then polish it off with a predictable and poorly executed death scene that feels as fulfilling as a handful of pennies to a starving man. While the series should be applauded on its classy tendency to pull back on the gore during these kill segments — usually integrating solid direction and camera work to let viewers know what happened without ever getting into the gritty details — there simply aren’t enough satisfying killings to make the next one all that scary or rewarding. Between this and the series’ inclination to spin its wheels by having episodes that don’t ever go anywhere or offer any type of real substantive thrills, Another ultimately just feels downright boring and uninspired.

On the aesthetic front, the show is a mixed bag. It can craft beautiful scenes that pop with color and an excellent understanding of how to use saturation and environments to tell a story. In other instances, characters look awkward in their movements, with animated actions coming off unnatural and contorted. Hair seems to be something that the artists at P.A. Works just couldn’t nail down either, looking particularly strange at times. We’re also a big stickler on solid eye work, and it’s with great displeasure that we have to mention characters’ eyes in Another are not entirely well-done. They’re slightly larger than they should be, looking abnormally gaping in comparison to the rest of a character’s face. Nevertheless, the series has moments when it looks wonderful in 1080p, appearing especially vibrant during more tone-heavy scenes that incorporate dark backgrounds and lush colors on costumes, props and miscellaneous set pieces.

Yet again, Another runs into polarizing issues with its aural presentation. For starters, the opening theme is incredible. It’s equal parts madness and precision, capturing the essence of horror in its fast arrangement, unpredictable melody and resonate tone that incites an unsettling feeling in the pit of the viewer’s stomach. In general, the score from Kou Ootani is one of the show’s strongest points, as it seems to know when to build up to a climax and when to decrescendo once the action has dissolved. The show’s English dub is not as consistent, though. For whatever reason, all of the voice actors sound like petulant children pontificating on forced ideas of humanism and ethnology. Instead of coming off as thought-provoking in these deliveries, almost every character, barring one of the lead female roles, speaks in a hushed, almost whisper-like tone that is absolutely maddening. The actors are clearly trying their best to come across as serious by using this method, but they fall short almost every time.

For those that prefer to watch the series subtitled, they will be happy with the work here. There’s the occasional clunky translation that will have folks turning up an eyebrow, but all in all, it gets the job done. It’s readable by all means, and is certainly the preferred way to watch the series.

Suffice to say, distributor Sentai Filmworks has seemingly skimped on the goodies with Another‘s blu-ray package. Outside of the two-disc collection that covers the 12-epsidoes, there’s only a pairing of extra features. The first is a clean version of the opening and closing credits, and the other is a special look at the series as a whole. For having only a dozen installments in the show, one would think that it would be simple courtesy to include a few add-ons for good measure to justify the price point. But, that hasn’t happened here and instead what we’re given is a pretty bare bones package. 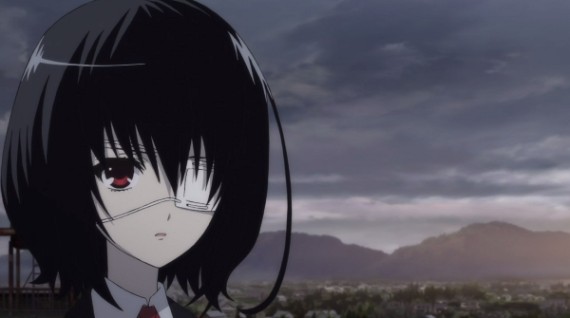 Another is a show that could have been good. Actually, it could have been great. Its premise is strong, and being handled by P.A. Works meant the show was in good hands from a production standpoint. Unfortunately, the end-result is less than desirable — far less. There’s certainly a horror story to see here, but its scares are incited for reasons not intentional thanks to the appallingly bad narration, sluggish pace, disappointing dub work and ankle-deep characterization. At best, the show is a bad rendition of Final Destination and at worst it’s a bad rendition of Final Destination. Enter at your own risk.