There’s nothing like seeing an adorable chibi-like creature continuously tested over and over again. Whether it’s being squashed, shot or just plain vaporized, Stealth Inc. offers a variety of ways for you masochists out there to live out of your virtual fantasies. A puzzle game that has strong elements of stealth, Stealth Inc. is true to its name, but whether it can sneak its way into our hearts is still up for debate.

Played on a two-dimensional field, Stealth Inc. is a puzzle game more than anything else. It isn’t necessarily about slowly maneuvering through the shadows, but finding the quickest and most efficient way to the end of a level. That’s not to downplay the importance of shade as it still plays a significant role, but the little clone will be in and out of it at a constant basis. You aren’t some blood thirsty clone that runs around with a pistol; instead you’ll be tasked with getting past cameras, lasers and various other machinery that seem to want you dead. Thankfully, this is done less painfully as the controls are simple and, for the most part, intuitive. 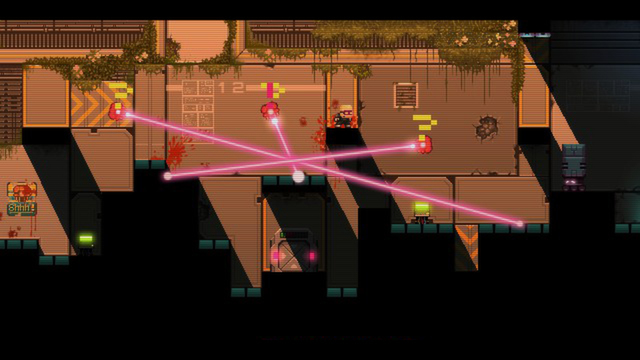 Stealth Inc. is separated into various stages within eight different sections, and as you cycle through the campaign, the levels become gradually more challenging. This includes adding various factors such as new enemies and tampering with moving lighting, all of which will help hinder progression, or at the very least, ranking. Thankfully, because you’re a clone, death will be a part of your gameplay experience no matter what. Be sure to know what you’re getting yourself into as this is a trial and error game that will put you through your paces. It’s finding the smallest openings and exploits to get the best grade possible that somehow induces a sense of satisfaction. It’s also the bits of humor thrown in ever so subtly that makes this a charming game, even though it mainly involves the death of one of your own.

This is the crux of the gameplay, and when seven of the stages in an area are completed, it concludes with a satisfying end boss. The bosses in this game are basically one big puzzle that involves maneuvering around a giant 360 degree killer machine. These are generally intelligently crafted and a lot of thought has to go into each one, but unfortunately, I do wish these battles would have been changed up a bit from the same watchful eye enemy in the middle of the room. It allows the developers to have a basis to build around each time, but the bosses feel less impressive and just a universal tool to conclude an area. Thankfully it’s the population around this enemy that’s more intriguing. 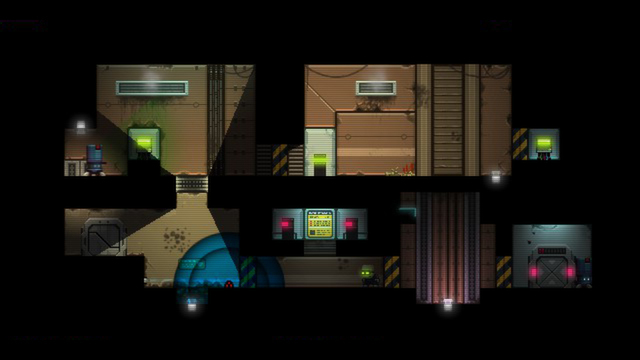 There also happens to be a level editor where players can construct their own metal traps of death and deploy it upon themselves. The transition to a controller is no doubt a hard one, but Curve Studios has done an admirable job with A Clone in the Dark. You will no doubt have to experiment with the system because there are underlying commands and items that aren’t properly explained, but if you can get it down, there’s the potential to build some inspiring levels. Unfortunately, while the editor is a nice touch, it’s disheartening to know that you can’t upload or download any levels for yourself. It almost becomes an unnecessary feature, only allowing you to play what you already know, instead of testing out your abilities on community driven constructions.

One aspect of the game that needs some work is transitioning through menus. While each stage is a lengthy process (especially later levels), trying to replay one is just as long. Maybe that’s an over exaggeration, but it takes a surprisingly long time to process your score and you have to go back into the level select to replay a level or even select a new one. An option to instantly restart right when you complete a level or even move onto the next one would have greatly helped the flow. It’s also disappointing that the menu system runs on a memory basis, saving what you last selected and not giving you the option to change it. How many times I’ve accidentally selected “Exit” instead of “Restart” is borderline frustrating. Additionally, controls can be a bit touchy, specifically when jumping back and forth from ledges. Thankfully, for the most part, the game handles nicely and very few times did I feel like a death or getting spotted was out of my hands. 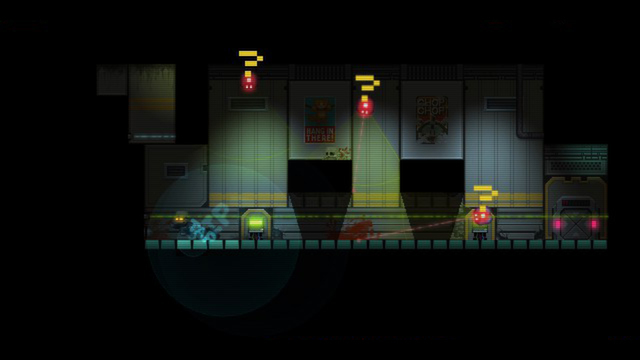 If you’re in need of a good trial and error experience that deals heavily with concealing yourself in the dark, then Stealth Inc. has your number. While this certainly didn’t captivate me as much as other puzzle games have in the past, complete with a disappointing menu system and lacking boss designs, there’s still a certain charm that radiates from the package. Even with its faults, Stealth Inc. is a thought-provoking experience that should give most gamers a run for their money.