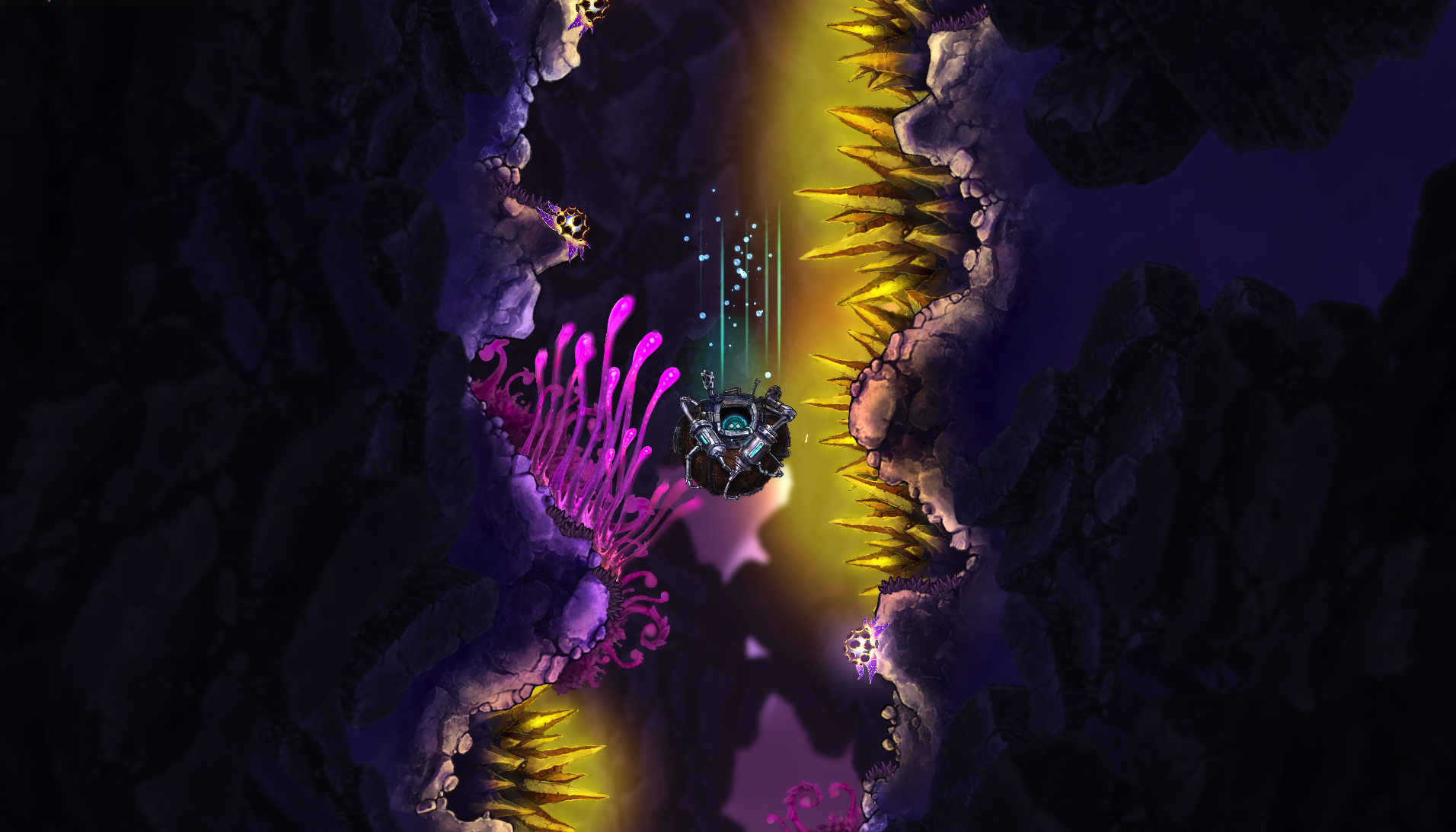 I’m writing this review while wearing a second, emergency belt. I do this not only because I have a crippling fear of the world somehow seeing my out-of-season Valentine’s Day underwear with large novelty hearts, but because while playing Beatbuddy: Tale of the Guardians I was absolutely terrified that this game might charm my pants off. This is a musical game that somehow manages to get both the music and game parts right, and is an absolute joy to play through from beginning to end. It also packs more personality into five minutes than most games have in their entire run, and it is amazing to consider that newcomer developer THREAKS has put out such an outstanding game with their very first effort.

This is a game about music, as you might have guessed from the title. The world of Symphonia is run by and powered from music, and the titular Beatbuddy is one of the Guardians in charge of making sure the flows and beats stay slick and smooth. Essentially, he’s in charge of keeping Limp Bizkit off of the planet and away from any microphones. Unfortunately, the Prince of Symphonia is getting a little greedy with the music and is trying to steal and manipulate it for his own gain. This upsets the whole ecosystem, causing various rhythmic baddies to sprout up and start causing trouble, presumably by starting mosh pits and sarcastically chanting for “Freebird.” It falls to Beatbuddy to set things straight and stop Symphonia from devolving into one big Miley Cyrus concert. 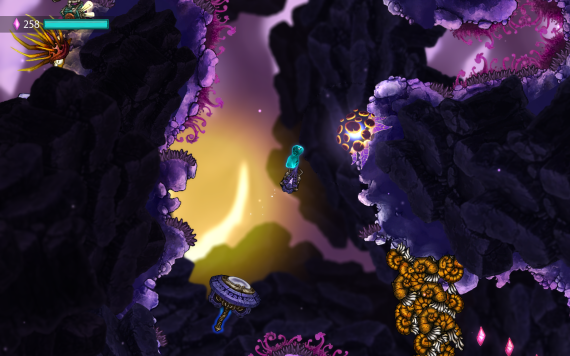 Beatbuddy plays like no other game I’ve ever experienced, because it actually feels like you are playing through a song. There are six songs in the game, and each one was created by a different artist. They’re all fantastic, and the soundtrack here is one of the best you can find in a game. If you have any affinity to video game music at all, this is absolutely something you need to check out because this is one of the best original soundtracks in years. There are clear influences drawn from jazz, techno, and even big band and swing music, and each of the six levels has an entirely original track that gives an area a unique feel. The biggest name here is Austin Wintory, and he lives up to his reputation as the music in his level is the apex of an outstanding assortment of music. There are no weak tracks, and each one has a unique flair and sound that really brings each of the levels alive.

This is the one time, however, where simply listening to the tracks isn’t enough to really get the full experience. The music is truly integrated into the levels, and the dynamic musical scores help give each level a unique feel and individual personality. When you start a level, the music starts but you really only are looking at the basic skeleton of the track. While already impressive, it becomes even moreso when you realize how every single aspect of the levels was optimized in such a way to play off the music and enhance it. Exploring more of the level will introduce subtle but distinct changes to the music, and a tapping crab not only introduces a new element to the sound, but his music affects the world around it. Snails stick out spikes preventing passage, and attacking the crab provides not only a temporary path, but remixes the music itself as the effect of its absence is heard immediately. In this way the music in a level slowly builds and evolves, culminating in the best fusion of music and gameplay I’ve ever encountered.

Beatbuddy also looks amazing, with bright and vibrant hand-drawn visuals utilized in a way that complements the music and gameplay quite well. The animations move and pulse in sync to the beat, making the whole game feel alive. And while there isn’t a lot of it, the dialogue in Beatbuddy adds to the charm as well, as the lines are funny and clever. Additionally, when a character speaks, he or she is accompanied by some beatboxing unique to that specific character. It might sound like a weird concept, but it works brilliantly and ends up adding another facet to the music. This is a game that just absolutely oozes personality, with so much charm and charisma that it is hard not to love everything about it. The whole package creates a unique style that is entirely original and very distinct. It feels like this game was a real labor of love, and nothing about it feels artificial or phony or focus grouped in any way. 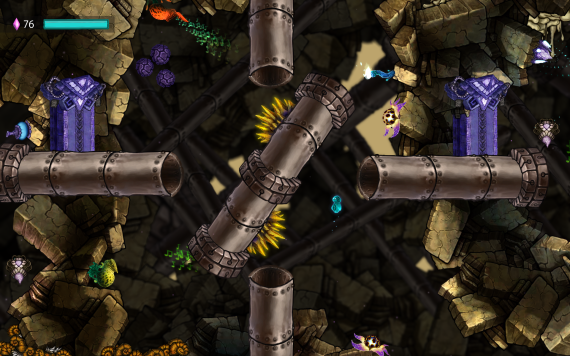 Levels, beyond serving as fantastic set pieces, are nicely varied and have a decent assortment of puzzles that help round out the gameplay. The basic controls are simple and easy to pick up; your character can perform simple attacks, pick up specific objects, or dash for a burst of speed. It can also bounce off certain objects, allowing you to aim your ricochets to destroy some barriers and carry keys around to open doors. While it never gets much more complex than this, the game does a clever job integrating some of these simple mechanics into really clever set pieces. Some portions can even be legitimately challenging, requiring you to rely on your reflexes and speed to complete them.

While there is a lot to love here, there are some other things that I merely like. The biggest issue is that Beatbuddy doesn’t feel like it has enough different ideas to power it through all the way to the end. The basic concept here is brilliant, and for the most part it works very well. Unfortunately, the gameplay doesn’t really progress much after the first couple of segments, and later levels seem largely dependent on the same ideas from the first couple of levels. There isn’t really much of a difficulty curve, making the early areas roughly the same difficulty as the later ones. More enemies are introduced throughout the course of the game and you even pick up a new ability or two along the way, but for the most part what you faced in the first level is what you’ll be facing in the last level, only with slightly more of it.

One of the last abilities you pick up allows you to find hidden things by entering a different mode and making the previously invisible objects visible. Not only does this have the unfortunate effect of obscuring the music, but Beatbuddy’s head starts beeping when you get near one. Essentially, it just acts as another step in what is exactly the same puzzle, only now you have to find the thing to interact with first. This isn’t introducing a new gameplay feature as much as it is hiding the old ones behind a curtain and making you find it first. A bit more variety in gameplay would’ve been nice, but luckily the core mechanics here are strong enough even without it.

Another issue is the game is very short, and I managed to play through the entire thing in a scant eight hours. I wanted more of this. More levels, more content, and most importantly more songs. The game feels like it ends a bit prematurely as well, rubbing its hands together and coughing loudly until we get the hint that it’s time to leave. While the final level is fine, the ending is a bit of disappointment and the game just sort of resolves itself without any big climatic confrontation of epic final puzzle or area. I’ve always been a bigger fan of quality over quantity, however, and there is no denying what content is here has been polished to a mirror shine. Still, there might be some individuals that might be hesitant to drop $15 on a game that can basically be finished in a day, because other than listening to the music another time there isn’t another reason to come back to Beatbuddy after you’ve finished it. There are some collectibles to find if you are a completionist, but they mostly unlock various development stills or behind the scenes footage and aren’t really worth the time to track down unless you are hopeless neurotic. 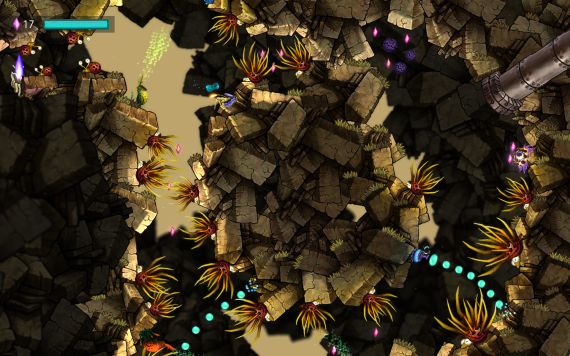 It is fairly amazing that this is THREAKS’ first foray into the world of gaming, because Beatbuddy is a spectacular experience that far outclasses what many of the big budget studios have been churning out. It isn’t perfect, as the game lacks length and any real variety in gameplay, but the good far outweighs the bad. There is just so much to love about Beatbuddy: the music, the visuals, and the charm are completely off the charts. Forget Guitar Hero or Rock Band and listening to your drunk friend woefully belt out the lyrics to Roxanne. This is a real music game, with every aspect of gameplay so perfectly molded with the music in mind. More importantly, Beatbuddy epitomizes why you should be excited about the indie scene in gaming. This is a tremendously unique, wildly creative endeavor that is a blast to play and even more enjoyable to listen to.