A few weeks ago, a rabbit popped his head out of a hole in my Mii Plaza and sold me some streetpass games. In an overly convoluted process, I became the owner of four different games that can only be used to their full effectiveness with a StreetPass. In the next week, we’ll be going through all four games to find out which are worth your attention.

Mii Force is a side scrolling space shooter akin to Aegis Wing or 1941 with a StreetPass twist. Out of all the games, this one is most like an actual game. It has branching levels, gameplay that requires skill and an ending. It’s light on plot, but still a little more engaging than the previous streetpass game, Find Me. It requires probably the most amount of attention of any streetpass game ever. This, of course, is a very low standard as usually a StreetPass game involves holding down the right trigger while rapidly tapping A to get all of the puzzle pieces.

The sidescroller levels are simple. Kill the enemies, collect all of the gems and make it to the end. It controls well enough, but the main draw is the StreetPass power. Depending on the street passed Mii’s color of shirt, they have different powers. These powers range from red flamethrower, blue pulse cannon and bouncy green balls. Each power can be leveled up three times with a maximum of four powers or projectiles being able to shoot at once. Three in the front one in the back.

The amount of engagement is a double edged sword. If you streetpass with a few friends every day, you’re going to love the pacing of this game. On the other hand, if you’re at a convention where there are thousands of other 3DS consoles, you don’t have time to play a seven minute long level. You just want to get back to holding down R and tapping the A over and over to clear out the ten people in your StreetPass plaza to get ten more.

Another problem with streetpassing is how it is linked to gameplay. You might say “Of course it’s linked to gameplay that’s the point!” Maybe so, but if you only streetpass one person, that means you can essentially get hit only once and you only get one level one gun to fire. That makes many levels impossible for people who don’t have people with other 3DS in immediate access. Sure you can purchase characters with play coins, but requiring to gather up at least three of four little animals can get expensive. 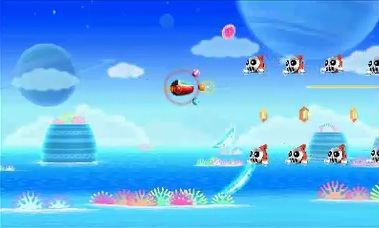 At a point it feels like a free to play game with a very poor business model. Grabbing players via StreetPass is a hindrance more than a joy. In Find Me, for example, even finding one character could be the way to defeating that final boss, but in Mii Force one character is basically useless, as getting hit once means that you have to start the level all over again.

Regardless of the weird StreetPass limitations, the game itself is a lot of fun to play. It’s the most traditionally game like out of all of the 3DS streetpass games. If you’re wanting something with a little more depth and involvement, Mii Force is the way to go. But if you’re looking for something that gives a little more instant gratification when seeing that little green light flash, look elsewhere.