Starbreeze Studios isn’t exactly known for fairy tale fare. The developer has created a name for itself through action-packed thrill rides and the Chronicles of Riddick tie-in games, far removed from the distinct change in tone that is their latest release, Brothers: A Tale of Two Sons. This moody tale is decidedly unknown territory for Starbreeze, but the end result is a thoughtful, pensive journey that any fan of storybook fantasy should enjoy.

Players control two siblings: an older and younger brother setting off on a tumultuous trek to retrieve a magical tonic for their terminally ill father. It’s a labor of love that takes the youngsters through deserted dungeons, dilapidated cemeteries, and other particularly unsavory locales, all in search of the cure to their father’s debilitating illness. The creatures you’ll meet with along the way are a strange bunch, ranging fom turtles to giants, all sullen creatures of the worst caliber, all as the player waltzes along with control of both boys at the same time. Like the unexpected shift in content tone from Starbreeze, this is a novel change in what’s considered standard for adventure games. While it’s got a steep learning curve, it’s definitely worth taking the time to figure out.

Here’s why: both brothers are conditioned for specific feats. One can’t swim, while the other can, and so on. Like the recently-reviewed PSN adventure Ibb & Obb, the duo’s skills complement each other in ways that condition you to become proficient with both of them. Directing each brother independently is done via the left and right analog sticks. Think of it as a twin-stick adventure game rather than hot neon shooter.

The focus is completely on exploration, forcing you to rely on your wits and trial and error. There’s no handholding here, and no guidance to keep you on the right track. Interestingly enough, there’s a complete dearth of English at all — the brothers communicate via fictional language and between themselves. It’s simply to gauge how a scene will play out by listening to their tone of voice, but Brothers does an excellent job of conveying emotion in this way.

The sprawling universe takes on a personality of its own, with fairy-tale-inspired locales that appear to be down on their luck. It’s a rude and unfriendly place where the sun never seems to shine, literally or figuratively. The way the brothers interact towns and kingdoms chock-full of these abrasive personalities is a sight to behold, and a glimpse into how even wordless narratives can work. The brothers themselves act as inspiration to these miserable townsfolk and villagers, bringing positivity and comfort to the many long faces peppering the landscape. It’s touching, and one of the reasons I quickly became enamored with this gentle little game.

As you continue your trek you’re faced with several challenges and puzzles, though one major gripe is the lack of difficulty. You can solve the various dilemmas in a matter of minutes, and little more for complicated trials. It’s a very simple game and particularly because of this that you can complete the game in a matter of hours. 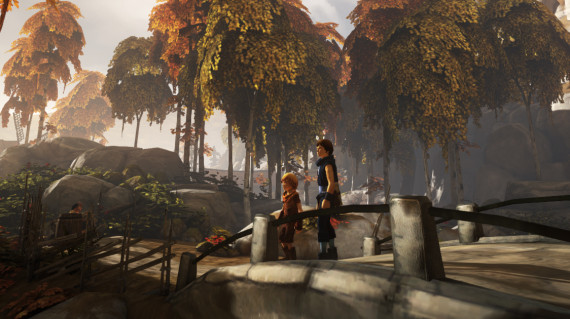 Oddly enough, Brothers: A Tale of Two Sons is more about the journey than the destination. It’s sobering, funny, heartfelt, and inspirational all at once, sprinkled with some real life lessons in between. If this is what Starbreeze Studios is truly capable of, then we’re ready to see plenty more — especially if it means more interesting experimental mechanics like the ones exhibited here.