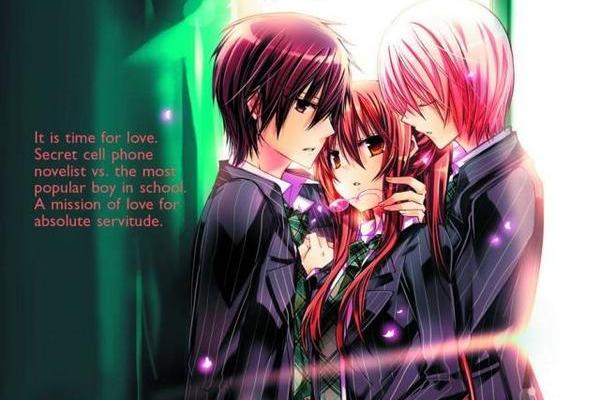 Missions of Love is not your stereotypical shoujo manga. When people tend to think of shoujo, they usually imagine stories of pretty women and men falling desperately in love with each other through incredibly romantic circumstances. Some of the most famous series provide incredibly gripping narratives beyond romance while others hone in on those specific emotions. So where does Missions of Love fit in? It provides a bizarre spin on the entire genre.

In Missions of Love, the story focuses around a few high school characters. First, there is the heroine: Yukina Himuro. Despite being a pretty young woman, she is feared by all her classmates. Given nicknames such as the “Snow Queen”, her peers are bothered by her continuous and icy stares. Little do they know however, that the reason for Yukina’s staring is that she is gathering information on people to write about for her stories! In her spare time, she has become an acclaimed cell phone novelist. Cell phone novels, by the way, are very brief serial stories that are published to subscribers’ cell phones regularly. So practically all of Yukina’s classmates are reading her novels, but are unaware of it thanks to the work being attributed to pen name Yupina.

Yukina soon learns that her readers are yearning for a romantic twist in her stories. This is a problem because she is so incredibly antisocial (and scaring people away with her eyes) that she has never experienced love. Heck, she has never even felt that she liked anyone. Thus sets the wheels into motion for Missions of Love; a writer who is deemed by all as too scary to get to know is now required to experience love first hand in order to provide steamy new content for her work.

Since Yukina is so poorly versed in actually interacting with people, it can’t be expected that she’ll go about finding love in a “normal” way. On one of her people watching routines she spies the most popular boy in school – Shigure Kitami. Shigure is not only the student council president but also a heck of a pretty face. At one time or another, all the girls minus Yukina have fallen for him. Teachers love him, guys agree with him and as a whole he is viewed as the perfect person. Yukina finds these traits incredibly boring until she discovers his big secret.

Shigure isn’t just the perfect, nice guy that everyone pegs him as. He has gained this status due to conscious manipulation of others. He purposefully treats his female classmates kindly in order to have them fall for them. After they confess, he denies them and writes it all down in his student planner. Although Shigure isn’t evil, he is definitely a cruel guy to play with people’s emotions in this way. When Yukina discovers this she reassess her opinions on him and decides this is the person she must experience love with.

Has she suddenly fallen for this awful man? No, but she reasons that this is the only person she won’t feel guilty about when she forces them to play along with her. Yukina uses Shigure’s student planner as blackmail. After all, if the school were made aware of his manipulative ways he would lose all the power he has. With the ability to lord this over him, she begins a series of requests — or demands, rather — which will teach her how to write about romance. The demands start tame, with holding hands and the like, but of course that’s not enough for Yukina. Her demands grow steamier in following volumes, as well as the introduction of love triangles.

Yukina’s cousin attends the same school as her and has always hung around her like a best friend. At least, that’s how Yukina herself pictured everything, until watching this blackmail-induced relationship becomes too much for Akira. He confesses his love for her, too. This is no doubt a really creepy idea for Western audiences to parse but he does seem far kinder than the jerkish Shigure. Other twists cause even more romantic tension but those are best left to being discovered by readers.

Probably the biggest issue about this series is that it reads as fairly disturbing if you really think about the circumstances. Would readers be okay with a story where a man blackmails a woman into engaging in romantic scenes with him? It sounds like a terrible plot, but here we are reading a story that’s exactly that, just with flip-flopped genders. Although Shigure is a monstrous man, he still does not deserve to be forced into doing things he doesn’t want with his classmate. Of course, as the narrative goes along we see that perhaps they do actually share real emotions for each other, but it’s one heck of a creepy way to start things off. With that said, the uniquely strong heroine is compelling and the main reason most will be attracted to the series.

As you might expect from a shoujo story, Missions of Love focuses very squarely on the heroine and her “love” interest. The vast majority of Volume 1 is devoted to them and their unusual manner of meeting and interacting. And unlike some other manga, readers don’t have to deal with the agonizing wait of characters falling for each other. After all, these two aren’t in love! They’re able to provide readers with all the attractive, steamy romance with no strings attached. At least, that’s how things start off. With subsequent volumes we get the introduction of new characters which further hinder Yukina’s romantic quest.

One of the most interesting aspects of reading this manga is how it focuses around the character’s determination to hate each other despite sharing romantic actions with one another. The question that pops up throughout reading is if it is possible to fall in love just by doing the actions associated with it. Despite being forced into hugging and holding hands with Yukina, Shigure does not seem to put up much of a fight. Then, Yukina begins to experience a hazy feeling in her heart. Are these signs of love, lust, or pure and utter hatred? As long as the story keeps things obscured, readers are left intrigued by the oddball relationship.

For the most part, the adaptation by Alethea and Athena Nibley is good, but you might never realize it if you simply look at the cover. Emblazoned on the front is an incredibly awkwardly translated synopsis. Beyond that though, Missions of Love reads very naturally. There are a few moments when there are references to Japanese-specific things which are not explained on the page. However, at the end of each book, there is a section which explains these references. This was highly appreciated since it helps make sense of the translation choices and teaches readers a bit about Japanese language and culture as well.

If you’re hungry for tremendously pretty lead characters then this manga definitely provides. Both the heroine and her “love” interest have gorgeous hair, eyes and seem they would be a gorgeous pair together. The rest of the cast is drawn in similarly attractive fashion because that’s what shoujo fans are looking for. As one might expect from the genre, there is also a fair lot of dreamy-looking closeups on characters. The art is well done, although it could be said that the lead character designs are not easily distinguishable from ones elsewhere.

Missions of Love is a story that might start off familiar before venturing into strange territory. It’s not rare for a shoujo heroine to be completely unaware of love and all that comes with it, but how often do we see a character aggressively seek it out? It is hard to appreciate this story arc right now though when it feels tremendously uncomfortable. It may just be fantasy, but it is still creepy to consider a plot around forcing someone to be physically romantic. All the same, watching the tumultuous relationship develop into something else is page-turning. By the end of the first four volumes it’s likely that most readers will be desperate to see what comes next.