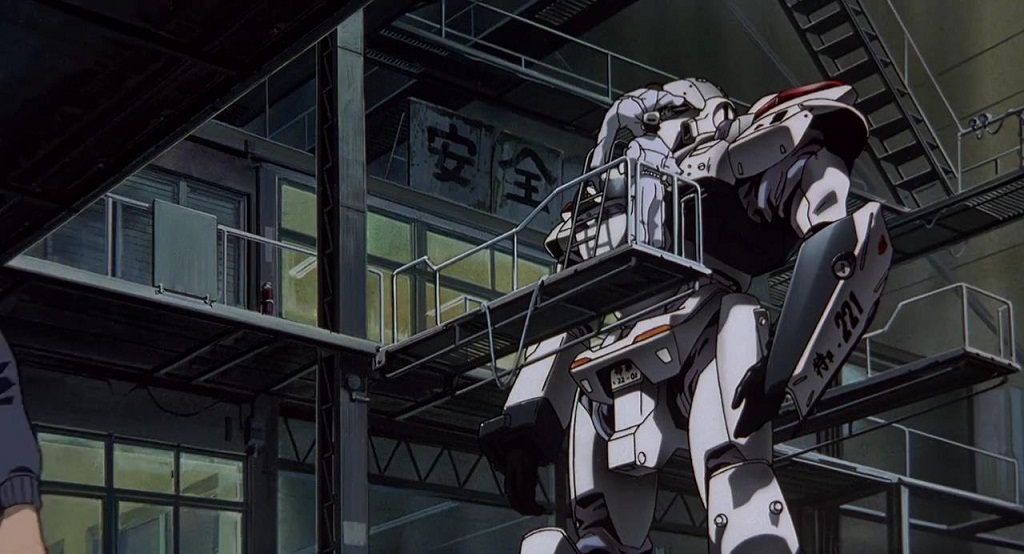 It’s difficult for a 25 year old animated series to look on-par with recently released ones, what with simply lacking the aesthetic vivacity of such works being birthed in today’s high-definition industry. Nevertheless, that hasn’t stopped Patlabor OVA from taking a swing at accomplishing the feat. But is it even possible for this 1988 classic to be relevant in terms of storytelling conventions and visual panache in the year 2013? 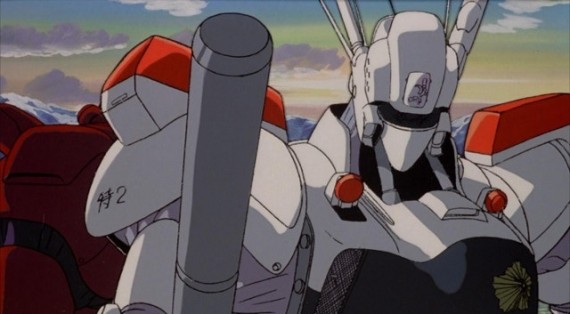 Touted as such, because it is as such, Patlabor OVA is something akin to Law & Order, but with mechs and a dash of comedy tossed into the stew for good measure. To that end, the OVA series may catch some viewers off-guard: considering the seriousness of the three main films, and the fact that Mamoru Oshii of Ghost in the Shell fame is in the director’s chair, folks might expect the show to take on a somewhat brooding feel. The truth is, however, this is very much so a series rooted in both drama and comedy, almost in equal portions for certain episodes. Even still, that’s what gives the story and characters here such charm.

Patlabor is set in the near future at a time when Robots, aptly called “Labors”, are employed in heavy construction work across the globe. But due to the rise in popularity of these machines, their use has essentially spread to various other sectors of society. Unfortunately, however, due to the increase in the civilian employment of them, Labor crime has become a real issue. As a response to this matter, the Tokyo Metropolitan Police establish their own fleet of Patrol Labors (Patlabors, for short) to combat these crimes and effectively deal with incidents involving anything mech-related. In the OVA, there are seven episodes that revolve around the Tokyo Metropolitan Police Special Vehicle Section 2, Division 2. This particular division is comprised of a team of rookies that act as the show’s cast. While Noa Izumi is clearly the lead protagonist of the series, all of the characters play a role giving the show an ensemble cast feel.

Most of Patlabor OVA‘s episodes are one-off stories, chronicling the division’s formation on up through arcs that involve all sorts of crime-solving. Scenarios ranging from Labor-jacking to uncovering the existence of sea monsters are front and center throughout the 210 minute runtime, and are genuinely exciting due to the narrative diversity offered. Regardless of the subject matter being tackled in the individual stories, though, Patlabor‘s characters are always in the spotlight. This is more of a human-drama series than an over-the-top action show. Consequently, and even though the show emphasizes them, the series is actually less about mechs and more about the everyday life of the police officers who pilot the giant contraptions.

Due to the fact that there’s only a handful of personalities to keep track of, the show constantly feels focused and never extraneous. Each episode, while tackling different cases (with the exception of a two-part story), allows viewers to learn more about the cast who cover the spectrum from serious to comedic, making sure to give folks a unique experience filled with interesting and fun interpersonal dynamics. While the comedy can be laid on pretty thick at times, it also knows when to reel it in and deploy life-and-death scenarios. On the whole, however, the story is shockingly, yet lovably lighthearted. It’s not fanciful to the point of being off-putting, but considering the films’ content, in addition to the implications of Oshii at the helm, viewers may expect there to be a story heavy with thematic undertones and intense violence. The series never really deals with either, though, and actually is better because of it. As a result, the show knows how to straddle the line between presenting serious situations/characterizations and silly encounters.

It should be mentioned, however, that certain characters seemingly get lost in the shuffle and are not explored with much depth at all. There is one cast member specifically, Takeo, who falls victim to a lack of appropriate screen time and subsequently feels especially one-dimensional because of it. Seeing as the roster of characters is relatively small, when one isn’t well-developed it’s made all the more apparent. Likewise, some of the relationship dynamics feel noticeably shallow and under-realized at points — this is particularly the case with Shinohara and Izumi’s relationship. Thankfully though, most of the time characters are fleshed out with solid motivations and ambitions.

Outside of the characters, the stories at large are just plain fun. The two-part episode is especially fulfilling thanks to its serious approach and the writer’s ability to make the circumstances feel truly dire. Even so, the more upbeat episodes are also fun and also carry with them some solid ramifications and deeper meanings. There’s even a few blips of social commentary to be found hidden beneath the overt dialogue exchanges. Regardless, when put altogether, this is a varied package with a balanced serving of solemnity and fun. It’s rare to get both from a single series.

It’s surprising that Patlabor OVA looks as good as it does. In all honesty, the transfer to Blu-ray has been a wonderful one, complete with displaying the show’s art with a level of detail that perfectly highlights the painted cel-animation and meticulously crafted hand-drawn art. The aspect ration is the original 1.34:1, which lends itself well thanks to the video’s complete remastering via the original film elements. This equates to a picture that looks dazzling in 1080p.

What’s more is the actual animation, which is clearly of a higher caliber thanks to the series being an OVA rather than a drawn-out one where the artists can’t take as much time illustrating. It’s not all rainbows and unicorns, however; there are times when the show looks markedly 80s, and we don’t mean that in an endearing way. The animation can lack sophistication, most obviously seen in the absurd mouth articulation. That minor qualm aside, this package manages to almost stand toe-to-toe with current works. It certainly isn’t totally on-par with them — and it never could be just due to its time of release — but it does a damn fine job trying. For anyone who enjoys 80s anime, the art direction will certainly make you sing with delight. 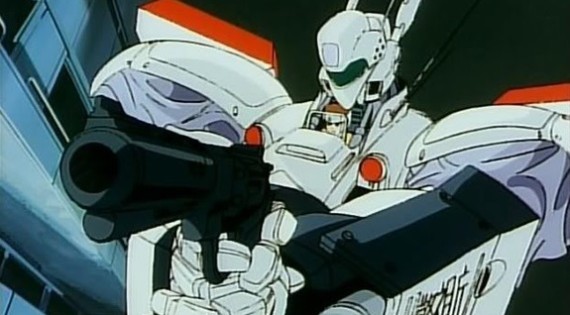 There’s two options for viewers here: English and Japanese. The English dub is the original, so whether that is a good thing or a bad thing may largely depend on each person. That being said, we’ve always found the original cast to reside somewhere between adequate to grating. Izumi, Shinohara, Goto and Nagumo’s actors all deliver fairly solid performances (at worst, competent ones), but the rest of the cast is extremely hit-or-miss.

The audio at large, however, is as best as it’ll ever be. It can definitely be held back by the limitations of technology at its time of production, but there’s never any glaring problems such as dropout. The sub work is also pretty decent and will undoubtedly be the more preferred choice for the “purists” out there.

While so much of Patlabor OVA‘s bundle is sound, the included extras leave a lot to be desired. In fact, nothing from the original DVD has made it over, leaving viewers with a measly preview for Tokyo Magnitude 8.0. Oh boy, stop traffic. This is disappointing considering what we know is out there in terms of extras. The commentary from Oshii found in the DVD version would have been at least appreciated. Without any semblance of additional content, the package feels extremely empty. 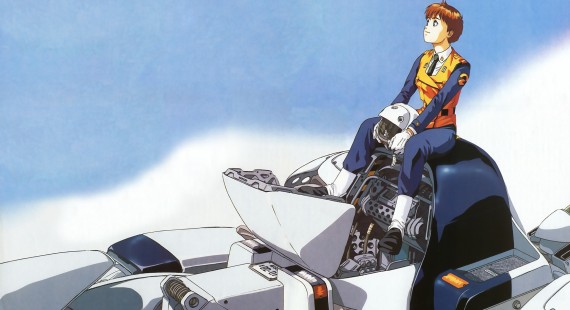 Patlabor OVA may be over two decades old, but you wouldn’t be able to tell it from this Blu-ray edition. Not only is the content wonderful, featuring seven episodes that are filled with excitement, humor and fantastic mecha-combat, but the transfer to HD has been a kind one. The visuals themselves look excellent despite the series’ age, and the audio is competent enough. There’s an apparent lack of extras which means folks will only get 210 minutes worth of classic 80s anime goodness. But anyone out there looking for a fun, short series should look no further than Patlabor OVA.