Imagine slowly treading through ancient ruins, being mindful of every step you take, when suddenly a grotesquely enormous spider begins jumping in your direction. Panicking, you sprint away to get the perfect shot on the arachnid with your trusty whip. You fall through a long chasm and keep your eye out for an arrow trap, which you narrowly miss, but in doing so you move a little too far in the wrong direction and onto a spike pit. This is how the experience with Spelunky usually ends and it ends many times.

The once Xbox 360 exclusive Spelunky was released earlier this week on Steam and it’s nearly the same game with a few extra twists. For those not in the know, Spelunky is a rogue-like action platforming game. Coupled with signature rogue-like permadeath, it’s also one of the hardest games around, but never unfair. That’s one of the beauties of the game. Every time I died I never blamed the game, I always blamed myself for being too careless. Sure, sometime the randomly generated map would create a nearly impossible situation to make it out of, but with enough planning it usually is possible.

Spelunky has had a long journey to reach Steam. The creator Derek Yu, AKA Mossmouth, released the first incarnation of the game at the end of 2008 on Windows. Besides inferior graphics, less tile sets and less assets, the game played exactly the same at its enhanced version that released on the Xbox, making it a wonder as to why the controls on keyboard are so finicky. Utilizing the arrow keys to move works fine, but trying to jump or do any actions on a keyboard makes me feel like my fingers are tripping over each other. Thank goodness the game has native controller support. As usual, a platformer feels most at home on a controller.

Another joy of Spelunkying is how little the game tells you. While there is a tutorial, it gives just enough information to let you interact with the world as much as possible. In most games, this would be bad, but part of the joy is discovering how everything works and what game mechanics you can get away with. Even though I played a sizable amount of the Xbox version, there were still new discoveries to be made when playing through the PC. Who knew that the god of the sacrificial slab would get mad if you accidentally drop a bomb on it and in return cover the map with spiders?

What may put people off about the game is its difficulty. It’s an insanely hard game to progress through. Personally, I made it to all four of the different caves that the game has to offer, but never once was able to complete it. It’s grueling and makes any kind of progression not a guarantee. To unlock a shortcut to a new area, one must give the tunneler what he requires at the entrance to the next area. Problem is, it’s all bombs and ropes, which are usually required to complete some of the levels the game throws at you. It’s a bit discouraging to make it through a cave only to know that next time you come back you will have to start from the beginning. But the difficulty is also the appeal, just be warned.

The PC release comes with a couple changes from its console based counterpart. A year since its console debut, the PC version comes with a daily challenge mode. Every 24 hours a new one time challenge will appear for you, your friends and the world to compete in. Couple that mode with higher resolution graphics and Spelunky makes a perfect transition to the computer. It even retains the local co-op and multiplayer which is fairly silly, chaotic and nearly impossible to make any sense out of, but it’s still a neat distraction from the meat and potatoes of the single player game. 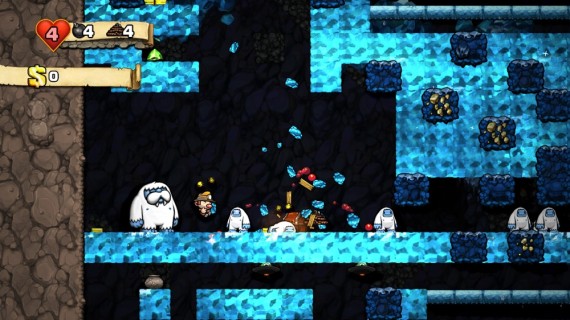 Those who missed out on the XBLA release of Spelunky and want a good tough rogue-like should pick it up from Steam. It’s a little more based on reflexes than most rogue-likes, but even if you find out you’re not that good at it, it is still a riot to watch friends try to get as far as the can before making the wrong step and getting crushed by a boulder.