Inspired by classic Legend of Zelda games and brought to life by Kickstarter, Two Brothers uses an overhead perspective and a Game Boy-style green and black color scheme to create a unique gameplay experience in a well-traveled sub-genre. It stars Roy and Mark, two explorers armed with swords, arrows, and sharp wits. Beyond what’s revealed on the Kickstater page, much of the plot is shrouded in mystery. Even the build we were given didn’t shed much light on it, but it does seem to have the potential to be compelling, and involves color, the afterlife, and a common scene in games — the game over screen.

Here, death isn’t something to be feared, but welcomed. Instead of marking the end of your adventure, it marks a new beginning. You’re sent high above the game world and allowed to interact with NPCs. This area is quite limited in the preview build, but looks beautiful. It’s full of bright colors that stand out even more after getting used to the monochromatic green and black look of the main game. Speaking of which, anyone who loved the overhead LoZ games will enjoy it. The one dungeon on display, along with the overworld area leading to it, showcased a more action-heavy variant of that kind of game. 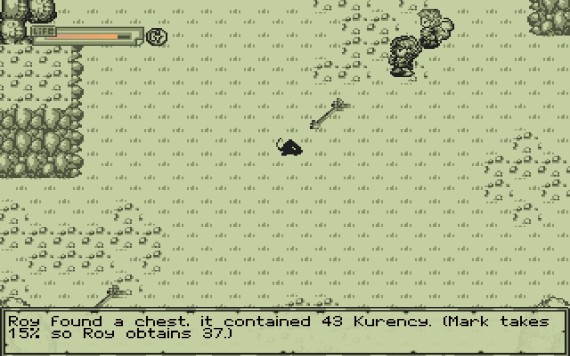 There weren’t any puzzles on display, although some dead ends do require some brain power to get past since you can get through areas you may think are impasses by simply slicing through them. The long and short-range combat is nice, with both characters being able to attack and your helper giving you access to a bag that you have to humorously jump into. This backpack is apparently quite spacious and houses not only a variety of items, but also an entire room! Clearly, the adventures came prepared, or just made use of their afterlife-only friends to aid them in their quest.

The short-range combat plays exactly like an LoZ game when you’ve taken damage. Unless you collect medallions that allow you to execute a more powerful attack by pressing Z and X simultaneously, you have to take a lot of risks and will likely incur more damage — even with a partner there to help you sometimes. Long-range battle gives you more options. You start with a bow and arrow, but can eventually get throwing stars. The big benefit to these is that they not only split into three and can damage multiple enemies at once, but can be retrieved afterwards. 8-way combat is possible, but tough to do with the keyboard-only setup, and will certainly work better when using a controller.

So far, Two Brothers is on track to deliver AV satisfaction for all lovers of 8-bit gaming. The graphics consist of a good blend of pixel art and detail — making it look like something that might’ve been released on a Nintendo system had one existed between the NES and SNES. The music is outstanding and backers who paid enough to get the OST as well are in for a treat there. The harpsichord music when you reach the afterlife is beautiful and just calms you down when you hear it. 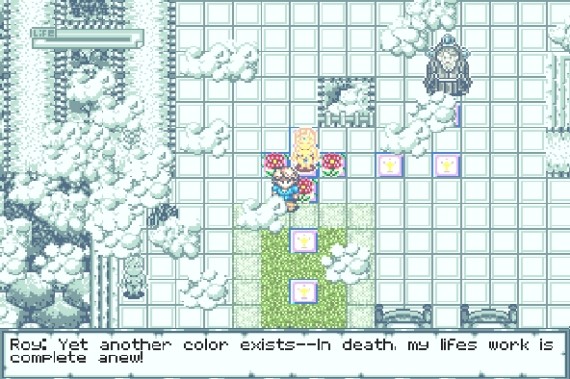 Even in a super-limited state and with some bugs, it’s clear to see that this game has a lot of passion behind it and that passion was put to good use. The gameplay has a shockingly high amount of polish given how little money it was made for and the music is honestly some of the best you’ll hear in an indie game. If you enjoy the overhead Zelda games, but wish they were more action-oriented, this seems like an easy recommendation to check out when it’s released in a few weeks.