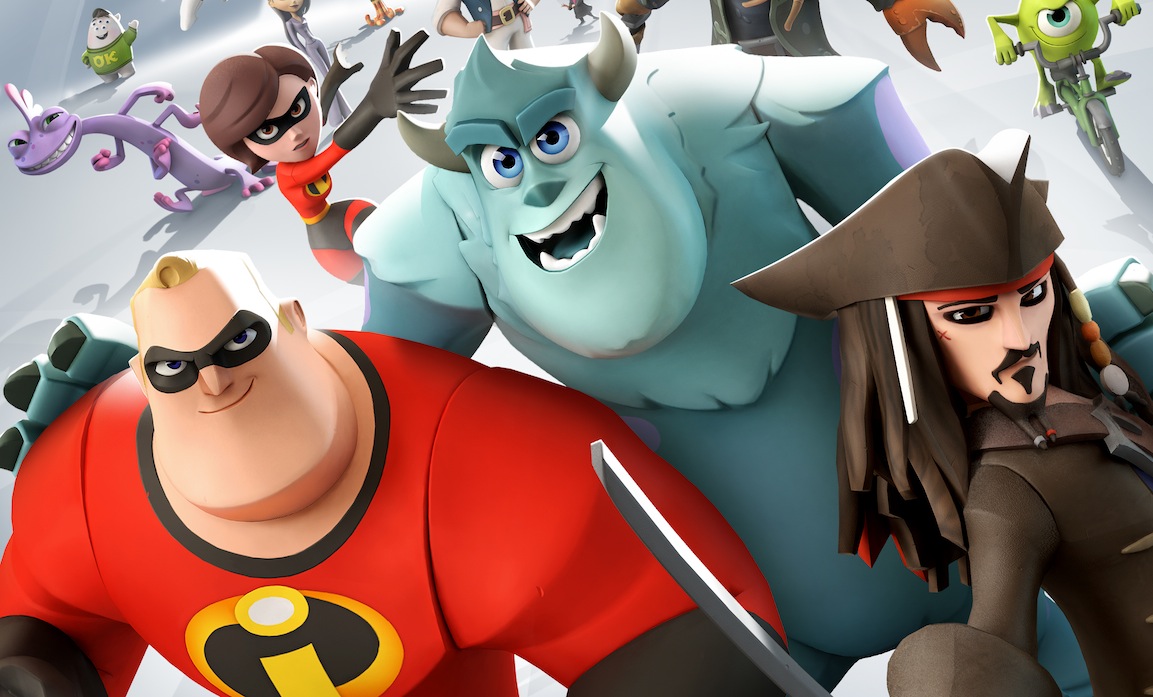 10-year-old me would have gone crazy over Disney Infinity. Alright, I’ll admit it, twenty-something-year-old-me is currently going crazy over Disney Infinity. When it first hit our doorstep, I thought it’d be a fun little diversion from more serious fare until I packed it up, passed it onto some kids in the family and moved on. Yet just a week after first unpacking my Disney Infinity Starter Set and thinking “huh, this is neat,” I found myself at Target staring at an end cap of newly-displayed Disney Infinity figures and had to use all of the restraint in me not to pick up whatever figures I needed to complete my collection. Disney Infinity is the sort of lightbulb moment of an idea where everything just comes together. It’s a video game, a collectible game and a series of toys all in one package. If that weren’t enough, the possibilities in the video game itself are seemingly endless, making Disney Infinity one of the most comprehensive interactive experiences to come along in a long time. The best part? Finally you and your kids can share the experience of begging your wife for a toy in the middle of Walmart.

There’s a lot of merchandising involved with Disney Infinity, so let’s get to it. The experience begins with the Disney Infinity Starter Pack ($74.99 MSRP), which includes the game itself, three figures representing a different universe, the “Disney Infinity Base,” three Play Sets and one Power Disc. To obtain more Play Sets, separate Play Set Packs can be purchased for $34.99. These each include two figures from the same universe and a new Play Set representing them. To begin with, each Play Set seems to support up to five different characters, so to complete the sets you’ll have to purchase additional figures. Three packs of figures, each from a different universe, can be purchased for $29.99, while single figures are $12.99 each. Finally, Power Discs are sold in mystery packs of two for $4.99. Is your head spinning yet? Good, because Disney clearly maximized the amount of possible “things” involved with the game. While setting down the Disney Infinity road is an expensive one and there’s no going back (it’s highly addictive), like almost everything Disney, the quality is exceptional.

I’ve had a hard time getting an answer to who manufactures the figures, but I’ve *heard* it’s Vinylmation, which would make sense as the quality is certainly comparable. To put it simply, these things are beautiful. They seem to be made out of a very well-constructed vinyl or vinyl-like material and holding one in your hand reveals a weighty figure that feels sturdy like a bonafide collectable. The paint is high quality and flawless, while the level of detail is second to none. $12.99 seems like a reasonable price point if these were merely figures, so the fact that they double as video game characters makes them quite the tempting purchase. Imagining a display case full of hundreds of them has me salivating (and thinking of returning to Target to pick up where I left off). Power Discs and Play Set tokens, however, are not all that impressive to look at and probably not worth their cost. Power Discs are simply pog-like pieces of transparent plastic with a picture of an item or character on them while Play Set tokens are transparent shapes associated with that universe (of course you’re paying for what it represents and not the piece itself). As Power Discs aren’t all that useful, charging $2.50 each for them seems a bit pricey and throwing just one more in the booster pack would have made it more reasonable.

Once you have a sufficient amount of Disney Infinity merchandise, it’s time to head over to the game itself. Everything begins with the Disney Infinity Mat, the command center of the game. The mat plugs into your console via USB and has three spaces. Two are for figures and one for Play Sets or Power Discs. Placing a figure on the mat makes the figure appear in the game within seconds, presumably by some sort of microchip technology. The game features multiple modes to play around in including Toy Box, Adventure Mode and Play Sets. Play Sets are the meat and potatoes of the Disney Infinity experience and allow you to play in a single Disney universe. The starter pack includes three different Play Sets (all built into one piece, but normally separate), including one for The Incredibles, Monsters University and The Pirates of the Carribean. Surprisingly (as the game’s terminology is quite confusing), a “Play Set” is actually its own self-contained game built entirely in its respective universe. 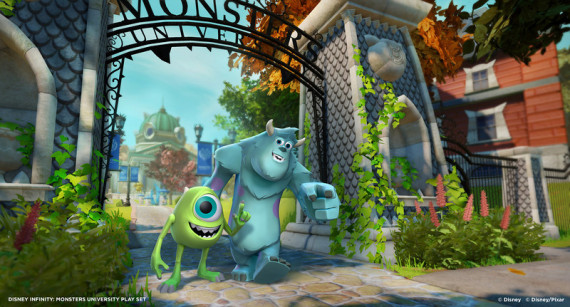 Each Play Set takes place in a large sandbox environment where you can follow the main storyline or take on sidequests to earn gold. As the adventure moves forward, new toys are unlocked that can be purchased for various amounts of gold. Some toys are necessary to advance in the main quest, meaning you’ll have to complete some side quests to complete a Play Set. The basis of each game is the same, but presented in different ways. The Incredibles Play Set, for instance, features Metroville, a sizable city split up into three different islands. Much of the Play Set is focused on battling Omnidroids and scaling buildings. The Pirates of the Carribean Play Set is a complete departure and features multiple islands, shantytowns and ships. Yep, you can build and sail ships onto the open seas, upgrading and customizing them while doing battle with other vessels that get into your way. The Monsters University Play Set does another 180 and takes place at (of course) a university. You can visit the football fields, quad and more on your quest to learn to become the best monster you can while fending off rivals.

As there are a staggering amount of Disney universes, it’s incredible that the Play Sets are so radically different from each other. Designing some sort of game that reuses assets (like a mishmash of Disney properties) would have seemingly been the easiest route, but instead we’re basically presented with a brand new universe for every Play Set. The Play Sets take at least five hours each to beat and that’s not including the time to do all of the sidequests and simply putter around once all of the areas and vehicles are unlocked. The sheer notion that there could be a hundred more Play Sets is mind-boggling and makes you question the implementation. Have they already been designed and placed (locked) in the game? Will a patch be released that contains new Play Sets every time more are set to be released? Is the game constantly in development? It seems like a staggering process and it’s no wonder why it reportedly cost a hundred million dollars to develop.

Besides Play Sets, the rest of the (pre-made) gameplay comes in the form of Adventures. These are essentially mini-games that challenge you to do a certain amount of something before the clock runs out. About ten are included with the starter pack, with each figure placed on the pad unlocking their own unique adventure. This is a neat little addition as it not only allows a bespoke avenue to play as your favorite character, but also more encouragement to seek out figures that aren’t included with Play Sets. The adventures are surprisingly fun and there’s quite a few that are addictive enough that it’s not rare to pass an hour trying to complete them with a gold medal (the highest rank).

Rounding out the package is the Toy Box, a mode that could either be the centerpiece or a forgotten novelty depending on the player. Toy Box is similar to LittleBigPlanet’s Level Editor in the sense that it presents you with a blank plot of land and lets you do literally whatever you want. You can create a kingdom to live inside or simply screw around making an abomination of a city. I tend to be partial to the latter, creating a world full of a hundred Tron light cycle riders and a block stairway up a mile to a racetrack suspended in the sky going through five Cinderella castles. Experienced players, however, could use it as an opportunity to create some truly unique games and I’m looking forward to see what people do with it. With literally thousands of options that seem to be continually increased, it’s unknown how kids will do with it (probably make race tracks in the sky), but bright ones into legos and its ilk could certainly create something practical if they have the patience.

The main issue with Disney Infinity is for such a beautifully produced physical product, the game itself looks second-rate. It plays great, but it’s hard to shake it seeming like a movie tie-in, which makes sense as its developer, Avalanche Software, has worked almost exclusively in the genre. While the environments are huge, they’re not all that detailed (with exception to the sailing segments in the Pirates Play Set) and there’s persistent slowdown and screen tearing. There’s also issues with invisible walls and music can be a bit repetitive. Still, as there’s basically three full games and ten mini-games included in the base package alone, nagging issues like these are both forgivable and understandable.

While Disney Infinity might be a precisely coordinated marketing strategy, it’s also a imaginative multimedia experience that will appeal to gamers of all ages. Kids will adore everything about it and adults will enjoy collecting their favorite expertly-crafted figures and seeing them in action. The game is a little rough around the edges, but the substantial Play Sets and massive amount of content makes it easy to understand lapses in visual quality. Even without knowing what’s in store for us next (Tron or Gargoyles, anybody?), the game is well-worth buying for Disney aficionados of all ages and could prove to be an excellent bonding opportunity for families.