A few weeks ago, a rabbit popped his head out of a hole in my Mii Plaza and sold me some streetpass games. In an overly convoluted process, I became the owner of four different games that can only be used to their full effectiveness with a StreetPass. In the coming days, we’ll be going through all four games to find out which are worth your attention.

Monster Manor is what Find Me II should have been. It’s one of the most interesting of all of the new StreetPass games in terms of categorizing its genre. Very similar to an RPG, but with some random elements infused. The StreetPass gimmick and the main form of gameplay is receiving Tetris-like colored pieces from street passers. You guessed it, the color of the pieces matches the shirts of the Miis who give it to you. 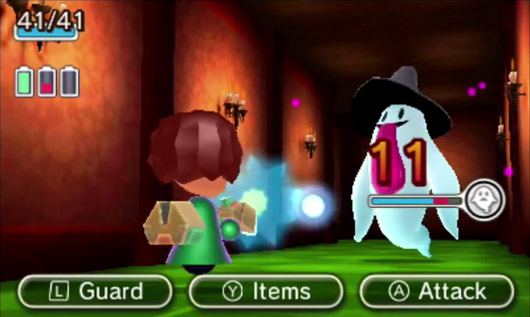 The main goal is to build enough of a path in the manor to try and get to its next level, but there is a whole other game where matching the colored pieces together yields valuable loot to help better equip the player for fighting monsters. The process of selecting the right kinds of Miis to give you pieces sounds monotonous, but it’s actually strategic. It turns into working a certain floor the best you can with the pieces you received to try to make the most of your run. In that sense, it feels almost like a board game.

But for a game called Monster Manor, playing the game the right way yields very little monsters. Besides the monsters already on the map, a monster only spawns when two colors that don’t match touch each other. Hence, matching like colored tiles means no monsters. It’s kind of a shame actually, because the combat is real time, filled with RPG elements and actually a lot of fun. From the random drops comes your weapon, in various guns with different kinds of elemental damage.

The combat itself is actually really simple. Essentially, a ghostly being appears and you have the option to either attack or block. Doing either drains battery until there’s none left and you’re defenseless until the batteries recharge. It’s engaging enough, and the combat is fun on the surface, but the game opens up to a deeper level when you have to swap to different types of guns on the fly that do the right kind of damage for the monster that is being fought. 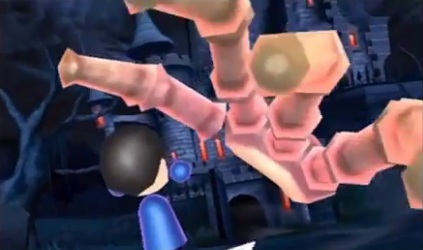 Nearly every time a monster is killed or a chest is opened, loot pops out. Sorting through loot is fun as in most RPGs, but kind of convoluted at the same time. It slows the game down considerably and the pace of the game is actually the worst part about it. Placing puzzle pieces and hoping something happens isn’t tense and can sometimes be boring. But when the combat happens, it’s still deeper and more fun than Find Me.

Monster Mansion is one of the better games that are part of the $15 dollar pack that the mysterious rabbit offers. Those looking for more activities of the RPG kind to do with the 3DS streetpass feature could do far worse.