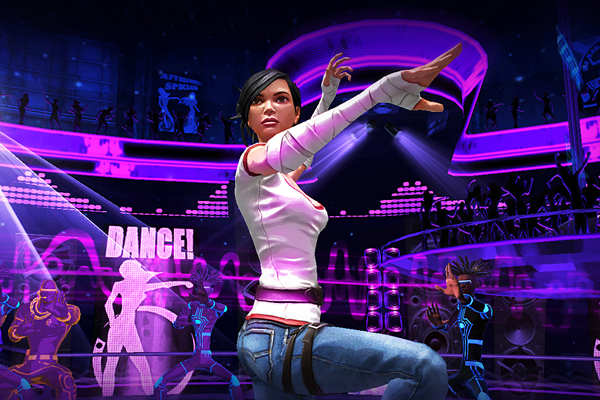 So there’s this sphere that contains all the music that ever has been or ever will be, and the bad guys want it. Once they’ve got everything it has to offer, they’ll monopolize music for the entire planet, possibly by owning the copyright on all musical creativity. It’s hard to say how they think this will work, but they’re after the sphere and only a martial artist with a sharp sense of rhythm can fend off the dastardly nogoodniks and their music-stealing plans. They’re polite enough to attack on the beat, you see, so just thumping them with a slick selection of moves won’t cut it.

As plots go it’s hardly Breaking Bad, but it’s a cheap excuse to surround a martial artist with a pack of goons, kicking and punching their faces into the dance floor to the rhythm of the music. KickBeat is a martial arts music rhythm game, and while the fighting is nicely animated with a smooth flow to the moves, what you’ll be controlling is the timing of the strikes.

The fighter stands in the center of the floor, a red and blue yin yang symbol underfoot. Initially only the Lee is available, but a quick trip through Normal difficulty unlocks the Mei for use. The enemies surround the circle, and while the camera may sometimes swoop in to show off a finishing move at the end of a song section, for the most part it’s bolted into place providing a clean view of the action. As enemies attack they circle around to one of four points corresponding to the game pad’s face buttons, and you’ll need to hit the button to the beat to counter them.

The enemies attack in a couple of different styles, and once they start mixing it up it’s easy to fall out of the beat. The enemies with symbols about their heads carry items that can only be collected with a double-tap, but if you accidentally double-tap an attacker not carrying anything it will count as a missed attack and do terrible things to the score multiplier. Other enemies attack two at a time, needing two button presses at once to clear, while linked enemies need to be disposed of by holding a button down for the first attacker, releasing it on the beat for the second. It can get fairly tricky keeping everything straight when a giant herd of baddies surrounds the circle, some only watching while others (clearly marked) circle in for the attack. Still, most of the time you’ll be tapping just the four face buttons in time to the music, and once you’ve got a sense of the beat it’s a matter of learning the enemy attack patterns to start raking in the star rankings.

There are a few powerups to be had, however. The red/blue yin yang symbol keeps track of health and chi power, with the red half depleting as you take hits and blue side filling up as you deal damage. Once blue is filled you can activate chi, which doubles the score multiplier. Some enemies also carry items, usually point bonuses but sometimes health or other powerups. Chi uses the left bumper, random powerups on the right. If it wasn’t for trying to exploit chi for proper scoring, Kickbeat would be a one-handed game.

There are more features rounding out the KickBeat package, such as multiplayer and the ability to import your own music and manually enter the beat for the game to build the fights around, but the central gameplay doesn’t have the depth to sustain it. You tap the four face buttons to the beat, and it’s entertaining enough in short bursts. The soundtrack is kinda OK, or at least has a minimum of obnoxious songs. The fights look nice, when you can take time away from worrying about the enemy patterns to see the smoothly animate flow of combat. With all its bells and whistles, though, KickBeat never rises above its simple gameplay. Hitting the right buttons in the right order in time to the beat isn’t a terrible way to spend a bit of gaming time, but there’s just not enough meat on KickBeat‘s bones to keep the music flowing.