What defines a game? That’s a question I rarely ask myself because I’m far too busy browsing Pinterest, posting pictures of my sweater vests on Instagram and eating pocket-lint flavored granola bars. Who needs video games? That’s what I tell myself right before I pull into the thrift store with a bundle of 5 dollar bills and the thick scent of patchouli oil. The truth is, I don’t even own a sweater vest. For that matter, I hate them. My wardrobe has been the same since I was 15 years old, and I’m damn proud of it. It’s not that I think I’m as cool as I was in middle school, because I was about as popular as Red Vines at a Twizzlers convention. It’s mostly because I have to keep 1000 ft. away from any location that children frequent, and unfortunately for my exterior, children frequent the mall. No, I am not some child predator, so calm your Chris Hanson asses and I’ll explain.

It was 2009 and I was broke. Me and my roommate weren’t into the whole “physical labor” craze going around, but we needed some money, and fast. Sure, we considered a multitude of solutions: robbery, drug dealing, drug using until we could build up the courage to commit the robbery in the first place, and other less socially acceptable methods. We hesitated at every turn, but ultimately it was hunger that pushed us to the edge.

We were roaming the streets one morning, on the lookout for someone to pickpocket when we saw a lemonade stand guarded by 3 tiny children. Perfect score, right? We thought so as well. Naturally, we approached the table, asked for a cup of juice, and while the kids were distracted by the sale, grabbed the money box and ran like Barry Allen. A ginger kid pounced on my back and began biting my neck. Meanwhile, the little girl is kicking me in the shin while shouting some pretty offensive obscenities regarding my weight and skin-color. The final kid, the real ball-buster, ran back to his house. I don’t know what he told the large muscular father-type, but I learned a lesson that day; angry fathers that think you harmed their kids can run really freaking fast. I could be a responsible adult and blame myself, but I place all of the blame on Bob Jamison. If it wasn’t for his 1973 game Lemonade Stand, Lemonade Tycoon probably wouldn’t have been distributed, and I probably would have never concocted such a plan, and most importantly, I probably wouldn’t have robbed those kids. Of course, that explanation didn’t stand in court. Conclusion: I’ll buy some shirts in 6 months or 150 community service hours. Whichever comes first.

This week we discuss the definition of games, escapism and much more with the ass-kicking Megan Fox (thankfully, not the actress). As the Co-Founder of Glass Bottom Games, the brilliant programmer responsible for Jones on Fire and the upcoming Hot Tin Roof, and a “Sexy Dance Fighter” (also known as a capoeirist), Megan Fox is establishing her position in the industry quite beautifully. 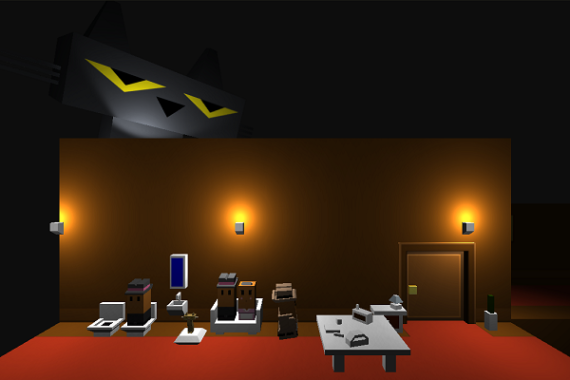 [Hardcore Gamer]  As someone who is developing something clearly unique, what would your definition of a game be?

[Megan Fox] Man, you had to start with the hard questions.

A game is an experience with rules, and some recognizable end-state achievable through observing those rules. But I should mention that neither the end state nor the rules need be in the game space. Shoot… what was the game recently where you wander around a pixelized environment? Heavily driven by audio? Fantastic experiential art game?

There we go. In that case, the recognizable end state is to put the player into a sense of wonder akin to wandering around in the woods behind your house as a kid. I achieved that state, and I “won”, and so I haven’t picked the game back up again… but I still feel like I completed it, and got a fantastic experience out of it. The “rules” in that case are simple. Here are some controls, here is an environment, do what comes naturally. Push buttons. Try stuff. Wander. But anyways, yeah, that.

Do you feel you’re exploring that concept with Hot Tin Roof?

Nah. Honestly, Hot Tin Roof is a very gamey game. It’s designed to be fun, provide a familiar framework of challenges, etc. That I can describe it even passingly by comparing it to other games (Ultima 7, Metroid, Zelda, kinda Metriodvania’y, etc) puts it in a whole other category from something fantastic and whimsical like Proteus. I’m not sure I have an art game in me. I might, if I gave myself enough breathing room, but my chief goal with Hot Tin Roof is more to present a fun, enthralling experience that tells a story and provides a neat environment to explore.

The exploration is key, but it’s… “game’y” exploration. You find neat abilities that let you explore more, that satisfying progression.

I imagine that would help a story game — too much freedom can harm progression.

Yep. Though – heh. That touches on another tricky bit.

“Story” is a loaded word. There is absolutely a story in my game that the player runs through, but I’m more concerned with the narrative. Which is informed by the mechanics, that ability progression, and all of the quirky characters and things you can find exploring around. But yes, same result. Too much freedom kind of breaks the narrative I’m aiming for. If I gave all the players all the abilities instantly – it wouldn’t be as satisfying

I’ve dipped my feet in the dev pool. It’s not as easy as some people think.

Nothing ever is — just about anything creative: writing, music, games, whatever. Everyone’s a critic. We have to deal with the Dunning Kruger effect on steroids, heh. Though, who knows — maybe even in, I don’t know, sewage refinement, there are people out there REALLY into sewage refinement. Maybe sewage techs get massive emails on how their processing techniques are ineffectual, etc. Hmmm.

I could make a shitty pun there. But I won’t.

Was that not one? 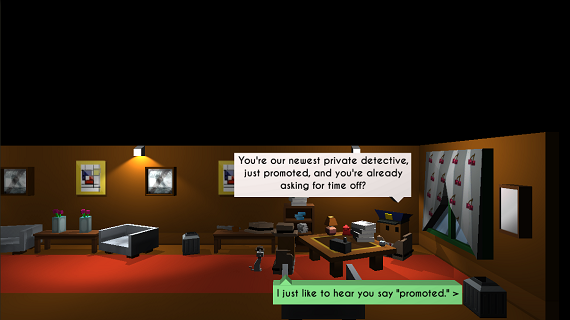 What would you say was the primary source of inspiration for Hot Tin Roof?

Aesthetically, it’s an evolution of what we did with Jones On Fire. That was me doing programmer art that was based on The Real Texas’s art style – which I loved, and thought I could put a different spin on. I’d done some work with procedural animation on LEGO Universe that I knew would work fantastically with that box’y style, while still making it feel alive. Hot Tin Roof hands that off to real artists for real adult visuals. Something actually polished. That’s Folmer’s department, but from what I can tell, he’s taking his trademark pixel’y style (which already worked great with Jones) and mixing in elements of art deco. Then of course steeping the whole lot in noir, specifically the color schemes and designs used in classic noir movie posters.

Mechanically, it can be accurately summed up as a mixture of Zelda, Metroid and Ultima… but spun out with a ton of noir flair. The revolver being the focus of all of the upgrades really changes how it all feels, and there really hasn’t been a side-scrolling Zelda-esque game in ages. I imagine that if Zelda II hadn’t been a bomb (I liked it!), it would have eventually evolved into something a lot like Hot Tin Roof.The you-can’t-kill-anyone thing also influences the mechanics, though. By adding that (and the detective’ing), it pulls in elements of point-and-click adventure games… but with absolutely no pointing or clicking. I hate pixel hunts. I don’t think anyone likes pixel hunts. It’s a mixture of RPG dialog trees (I love dialog trees / useless character detail you can dig into) and day/night schedules (think Ultima 7 or Majora’s Mask), and… hrm.

Imagine if the Metroid scanning visor let you “target” objects, and “combine” them with an object you were holding in your hand. That’s kind of how the magnifying glass will work. So it’s got elements of the point and click, item combination, etc games, but it really isn’t point and click’y at all. If that makes any sense.