This is the first of what will be a series of A Realm Reborn posts that feature detailed information about the game, its mechanics, its good things, and its bad things. Due to the game being an MMO that promises frequent changes, we won’t be giving the game an official score. But my full, unadulterated thoughts on the game will be here for all of your eyes to look at and read.

A Realm Reborn has had a rough start so far. Financially, as far as I can tell it’s been a remarkable success – especially when considering how poorly received its predecessor was. But server-side, the game’s launch was sort of a mess. At first it wasn’t too bad, I could get on if I was persistent enough, and willing to play late enough at night. But about five days after its release, it was impossible to get in. For five days this issue persisted, but as of this writing, things have gotten much better. And I’m happy to report that despite its server-capacity woes, A Realm Reborn is a great communal Final Fantasy experience… at least it has been thus far. 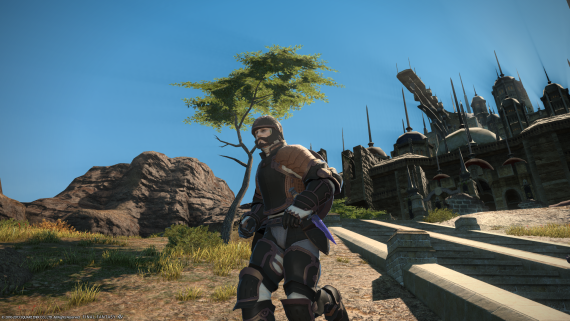 This is my character, OldMan Majorintine. No I don’t know how I came up with that name, but you’ll be seeing a lot of him in these posts.

One of the things I find most unique about, and count as a big selling point of the game, is that your character can be a jack of all trades. Did you decide to make your character a swordsman but aren’t digging it so much? That’s fine, join the archery guild and give that a shot, if you don’t like that, try anything you’d like! Equipping a weapon that is used by a different class will instantly transform your character into that class, with a skill level specific to that class. This is great because the main issue I run into while playing other MMOs is that I never want to play through the same introductory quests all over again. But in a Realm Reborn, you keep playing your same character, with the same quest-progression, just as a different class and at a different skill level.

So I started the game as a Gladiator because I enjoy tanking in MMOs. It’s a pretty standard class, you can take a decent amount of damage, and dole out a fair amount as well. You can use a skill to gain your enemy’s attention, taking the heat off of your would-be party members. Like I said, pretty standard stuff, and pretty much the only experience I’ve had with MMOs. So I thought “you know what, maybe I’ll try an archer or something at some point”. But here’s the thing, I had heard you could play multiple classes, but I didn’t know at what time that ability opened up – and I had no idea that you could play every class with one character. So I went to the archery guild, was given a bow, equipped it, and then a whole world of possibilities opened up to me.

Like I said, each class has its own dedicated skill level. This concerned me at first because I had already gone through many of the early-level quests that the part of the game I was at had to offer. Sure, the archery guild gave me a few quests that leveled my new persona a bit, but I was still far too under-leveled to be of any real use. I could of course just grind through the low-level areas, aimlessly killing weak enemies, but what fun is that? Then I remembered the game’s “Duties”. But to successfully describe those, I’ll need to give you a rundown of the game’s four different “disciplines” that categorize the game’s classes. 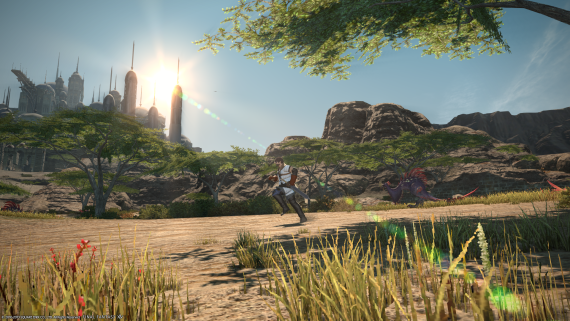 Now that we have that info out of the way, there are several kinds of duties: “Guildhests”, “Trials”, ‘Dungeons”, and “Levequests”. The first three duty-types listed are basically just slight variations on traditional MMO dungeons. You can go through these instances with three friends, or you can be matched-up with three strangers automatically. Though if you resort to doing the latter, it can take quite some time for the game to match you with the required handful of similarly-leveled players. I’m not fortunate enough to have any friends that play the game, but luckily the game’s community is pretty welcoming, and – for the most part – pretty good at playing their part in the battle. If you’ve been through dungeons in most any other game of this genre, you’ll feel right at home. One player acts as the tank, two play support, and one heals everyone. Duties offer a pretty good amount of XP, but due to their length, playing through them over and over again may grow monotonous. We’ll have more on the game’s Duties (dungeons) in a later post. These kinds of duties can be done over and over again with no limit.

The final duty-type is the Levequest. Levequests make it incredibly easy (and surprisingly fun) to preform traditionally grind-y tasks in an effort to level-up either a brand new character, or a character’s new class. These quests range from “kill X number of these before the time runs out” to “escort this guy to this location before the time runs out”. There’s a good amount of variety within Levequests, and there’s a whole set of them tailored to work for each discipline. And unlike with the other duties, Levequests are entirely solo-able, so there’s no need to worry about waiting in a queue for upwards of ten minutes trying to find some decent teammates. Unfortunately, though, you can’t just do these all day. Probably in an effort to keep players from reaching the level-cap in a few days time, everyone is given an allowance of three “Leve Points” every twelve real-world hours. These points do stack, if you feel like saving them up, but once you run out you’ll have to wait until your next disbursement to take part in more Levequests. 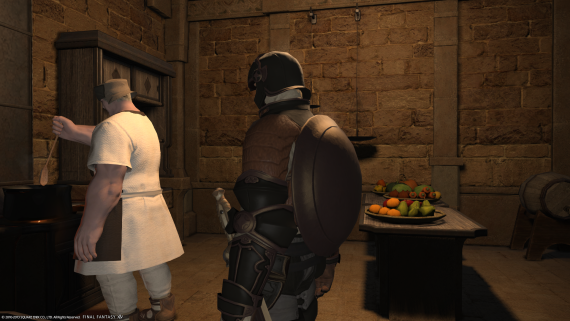 If the ones I’ve played so far are any indication, each class is pretty fun. And equally fun are the game’s quests. Sure, you wont find anything terribly original if you’re an MMO player. You’ll come across escort quests, and a whole lot of “gather x amount of these things” quests, but if you dig MMOs, you know that trucking through menial tasks like these is an oddly satisfying – and pretty relaxing experience.

A result of being able to play multiple classes, the game also includes Final Fantasy III’s Jobs system. I haven’t gotten far enough into the game to really have a grasp on how these work yet, but once two (or possibly more) classes are leveled high enough, you can equip a Job. An example of this is if you have your Gladiator class leveled to thirty and your Conjurer up to at least fifteen, you can equip a paladin job. Like I said, I haven’t done this for myself yet. So expect more Job-talk in the coming post(s).

The game also features what are called “FATE” quests that that pop up randomly throughout the world. These are similar to Guild Wars 2’s public events in that you can participate in these missions with everyone in your server. At times these quests will be somewhat difficult battles with one large boss, or simple “protect the thing from bad things” quests. But all the same, the comradery built by this server-wide participation is pretty great. 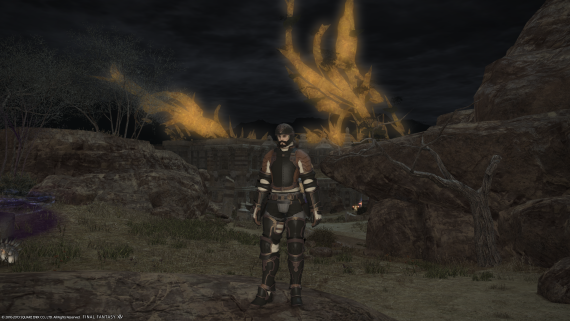 Even though you can probably tell by looking at the screenshots scattered throughout this post, it’s worth noting that the game looks gorgeous. It’s got pretty colors, high-poly character models, it even tops what I previously thought was the best-looking MMO, Guild Wars 2, even if not by much.

So far, the one primary thing I’ve been shaky on is the game’s plot, and the way it’s presented. In most MMOs you’re given a box full of text that tells a bit of story, or in something like Star Wars: The Old Republic, everything is fully voiced and acted-out in cutscenes. In A Realm Reborn, most of the story is told through unvoiced cutscenes that require you to click through the text, but on some very odd occasions, voice acting will pop-up. The first time voice acting was featured in a cinematic, I was pretty shocked. I even asked the people on my server if all cutscenes were supposed to have spoke dialog and the answer was a resounding “no”. There have even been some occasions where a scene had dialog, but then after one character said his/her lines, it went back to just being text-bubbles. It’s understandable to not feature fully-spoken dialog in a massive MMO, but the inconsistency can be sort of jarring.

And the way you have to click through all dialog is just tedious, and – at least to me – not nearly as tolerable to read as the traditional boxes of text. Call me a lore-hating monster if you will, but on many insignificant-seeming non-story quests I just skipped right through the dialog so I could get to my next quest. I’ve been tempted to do the same with story quests, but since I’m covering the game, I figure its probably best for me to pay attention to the game’s plot, even though it’s less-than interesting so far. From what I’ve heard it picks up further along, so my fingers are crossed that it does.

I’m not entirely sure why the original Final Fantasy XIV was so poorly received, but whatever was so bad about it appears to be fixed. So far, A Realm Reborn has been a pretty wonderful experience. It has a few issues, but it seems like a wholly competent, and supremely enjoyable game. Hopefully that stays true as I delve further into it.

That’s about all for this update. Keep checking back for further descriptions of the game, how it works, along with what’s good, and what’s not so good about it. The next update should include some more specific job-talk, dungeon-talk, and we’ll see if this story gets any better.