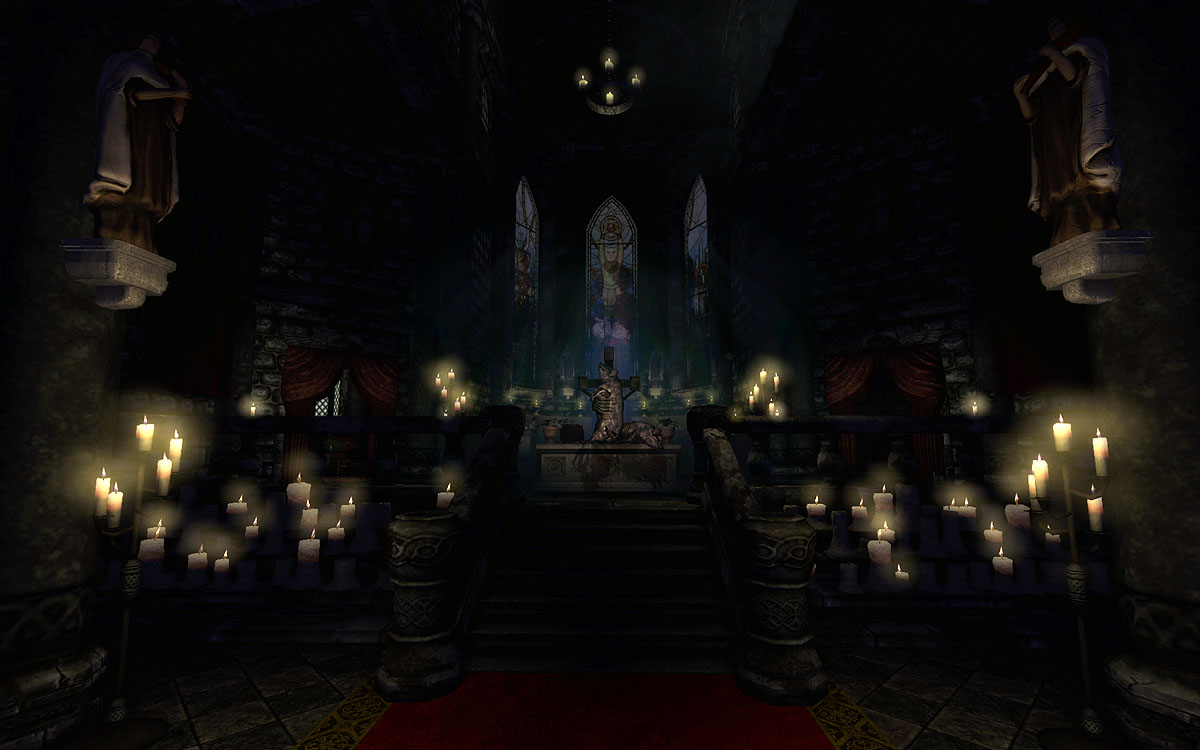 There have been many games that claim to be scary and just completely fail to live up to their billing. Game developers frequently sacrifice suspense and terror for gameplay mechanics, leaving true horror titles in the minority. You can call your game survival horror all you want, but if I’m chasing down weird shaped creatures with my explode-o-gun 3000 and the only impediment is how many health packs I keep tripping over, then I am the horror that the monsters need to be surviving from. Amnesia: The Dark Descent was one of the few games in the past couple of years that actually understood that a good horror game needed things like atmosphere, tension, and a story, and that throwing ugly things at you isn’t scary without the proper context. With its sequel, Amnesia: A Machine For Pigs, it is obvious the people at The Chinese Room still know how to craft a genuinely frightening game. Unfortunately, while the story and atmosphere are still here, this feels like a bit of a sophomore slump for the Amnesia series and the game just isn’t as strong as its predecessor.

You play as Oswald Mandus, meat processing and distribution tycoon and contender for most amazingly English name of all time. You’ve just awoken in your mansion after suffering from a severe fever, and despite how ill you are things become worse once you realize your two kids are missing. Despite the severity of your illness, you embark from your sick bed to look around the grounds and find out exactly where your kids went. Your trek will take you through your old, derelict Victorian mansion, through a nearby church, and eventually to the depths of the strange machinery you keep deep under your house, the purpose of which you either can’t or don’t want to remember. 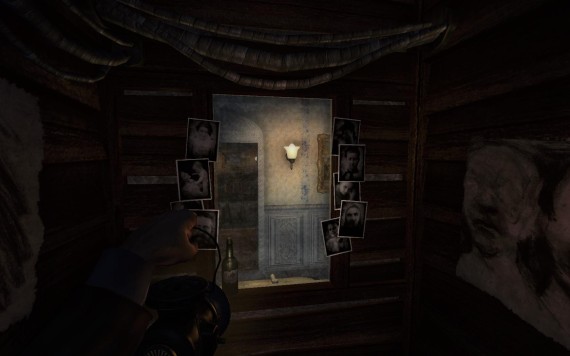 The story here is by far the strongest aspect of the game, in so much as it stands above everything else like an Olympic weight lifter competing with a classroom of eight year old children without hands (the latter of which sounds like something The Chinese Room would work into one of their games if they could). It is so well written and genuinely interesting that it kept pulling me along through the game, despite all the nervous flutterings in my stomach that were telling me to turn the game off and go play something more fitting to my bravery level, like My Western Horse 3D. Obviously, the story is more complex than it initially appears, because games where you find your missing children hiding behind the couch don’t make for very good horror titles. Each location uncovers some new and unsettling twist, and by the time you unravel the whole thing the game has already become like eight different kinds of creepy. The atmosphere and writing are both so well executed that I was on the edge of my seat, flying through some of the later locations just so I could see what was going on. There is a real desperation to the story here, as it tackles concepts such as loss and even what it means to be human, and I was utterly captivated by the entire thing.

While I loved the story and the atmosphere and how well written the whole thing was, I’m a little less excited about A Machine For Pigs as a game. It isn’t that the gameplay is necessarily bad, but it is fairly simplistic and lacks the depth offered by the first game. Gone is the sanity meter, replaced instead with a kind suggestion not to get hit too much by any of the monsters if you don’t mind please. Or, go ahead and do it if you want, because worse case scenario is they end up killing you and you lose like a minute’s worth of progress. While the loss of the sanity meter might not seem like a major change, it was something I sorely missed. The weird and unsettling way the screen would alter made it seem like you were in a real battle for your character’s sanity, and working out the best paths to remain in the light and avoid enemies added another facet of strategy and difficulty that this game definitely needed.

Another change is that there is no longer any need to manage your resources, planning out which lights to turn on with your limited supply of tinderboxes and oil as the lantern you pick up this time around lasts for the entire game. As such, you can just basically leave your lantern on the entire way without any major consequences, except for the times when it starts to flicker and almost shut off in a way that basically guarantees that danger is around the corner. This is incredibly creepy the first time around, but considerably less so each subsequent time as it always telegraphs danger. “HEY SOMETHING SCARY IS ABOUT TO HAPPEN,” the game shouts at you as it grabs you by the shoulders and shakes you back and forth. Thanks, game! I might have actually jumped if you didn’t tell me to watch out first. 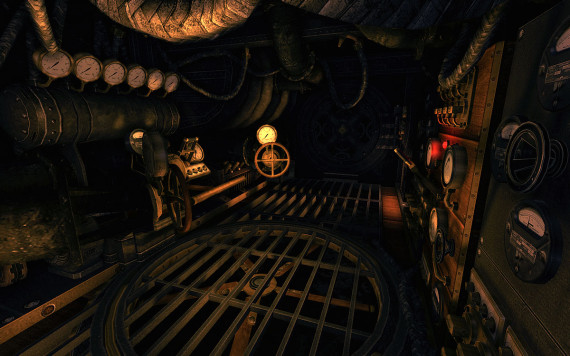 On top of this, the monsters themselves aren’t even that creepy. The maximum amount of creepiness comes before the monsters actually show up, as the game taunts you for multiple chapters with vague whispers and hints of unspeakable creatures. Odd music cues, weird shadows, and brief glimpses of the creatures set the scene nicely, causing a palpable sense of dread and foreboding. This was the height of the terror for me, and for multiple chapters I took every corner as slowly as I could so nothing popped out and forced me to pee in self-defense. Unfortunately, once the monsters actually do show up a lot of the tension I loved sort of dissipates as the creatures themselves are not particularly frightening either in appearance or actions. Once you get accustomed to the AI, the encounters become entirely trivial, as it takes several hits to actually incapacitate you and the rooms can be cleared by just running through them on your way to the exit.

The other major aspect of the gameplay is the “puzzles” although that is somewhat of a generous term for what the game offers. Each area seems to have one major puzzle to solve in order to progress to the next one, but most of the time all this involves is bringing one thing to another thing. You can pick up objects and sort of manipulate them, but really all you ever need to do is bring the object within the proximity of its target location and the rest is usually done for you. There wasn’t a single puzzle in the entire game that really offers any sort of challenge, and all they really do is get in the way of the far more interesting story.

That’s basically all the game offers. A little puzzle, a little sneaking, and you’re on to the next area where you can repeat the process again. This is a simpler, less involved version of The Dark Descent with a couple of the more interesting core mechanics removed. Without the sanity meter the game feels somewhat generic the few monster encounters basically boil down to running from room to room to avoid the handful of pig monsters you come across. And without any challenging puzzles, there is really nothing that stands as the slightest bit of an impediment to your progress. The real impediment in this game is the nagging sense of dread the story manages to corrupt your mind with, and if you can overcome your own apprehension then A Machine For Pigs doesn’t really have any other ideas of how to slow you down.

Outside of the story and the writing, the other aspect I did really enjoy was the exploration. Level design is incredibly linear, but still fairly strong and there are tons of notes and audio recordings scattered throughout the levels that add more to the story and help you understand the exact nature of the horrors you face. There really isn’t anything extra to do outside of looking for these, but at least for me this was enough. Finding out more about the story was enough of a reward, and the five to ten hour run time of the game was appropriate enough to not need any additional padding.

Amnesia: A Machine For Pigs is a solid horror title with a great story and excellent atmosphere, and if this was a movie or a book I’d have no problem recommending it to just about everyone. Unfortunately, this is missing some of the major gameplay elements that made me love Amnesia: The Dark Descent and as such it feels a bit like Amnesia Lite. The absence of the sanity meter, a light source that never runs out and a general lack of challenge end up sapping the horror a bit, while the puzzles are a disappointing set of fetch quests that never get much more complicated than bringing one object to another. Still, the story and writing here are strong enough that I still recommend it to enthusiasts of the genre. It is a definite step back from The Dark Descent, but even several steps back makes this better than almost any other horror game released in the past decade.