It’s hard to believe that Disgaea: Hour of Darkness is 10 years old. The game came out in late 2003, sold out quickly, went for a ridiculous price if you were lucky enough to find a copy, and eventually got a reprint and then a Greatest Hits edition. Which would suck if you were one of the people who’d paid $60 or more when it was scarce, but what can you do? Since that time Disgaea has had multiple sequels and spinoffs, Nippon Ichi Software has become a fairly prolific publisher that seems quite happy serving its niche market, and one year has turned into another until all of a sudden a decade has passed. Now it’s time for a true sequel to the original game uniting Laharl, Etna, and Flonne in a quest to earn the Netherworld Overlord the respect he feels he deserves.

Disgaea D2: A Brighter Darkness pickus up Laharl’s tale a few years after attaining Overlord status. While it’s all very nice to be Overlord of the Netherworld, not a lot of its denizens know he’s made it to the top, which kind of defeats the purpose of being a supreme ruler. So, ego running unchecked and all 9999 levels earned in the original game somehow forgotten, Laharl and friends head out from their Overlord Castle home base on a publicity tour. Unfortunately his usual tactics of winning hearts and minds by beating them into submission returns exactly the kind of result one would expect, a young girl claiming to be his little sister turns up, and pretty soon there’s the Netherworld is in complete chaos again. It’s nothing an endless succession of turn-based battles can’t fix, though. 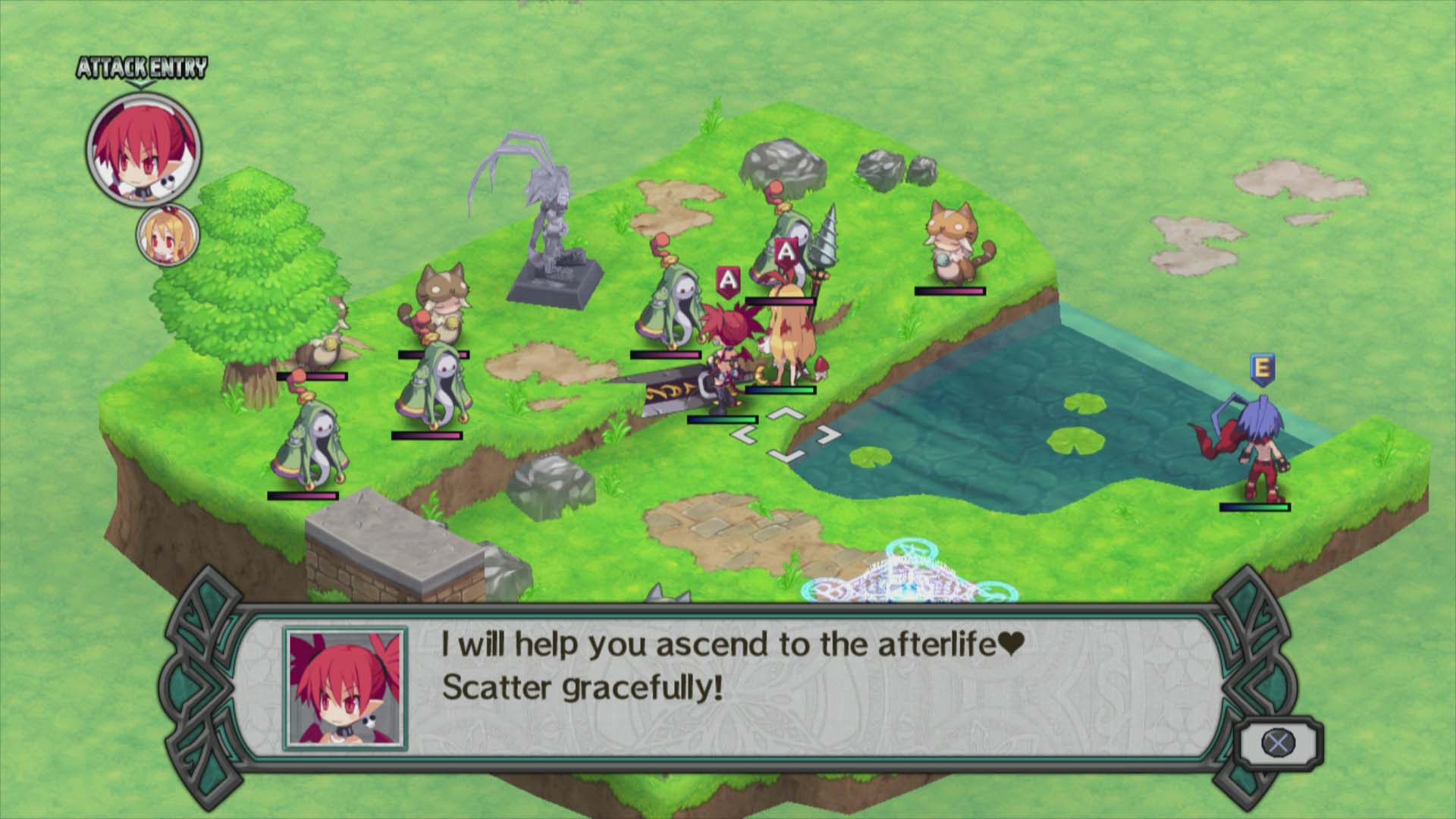 Disgaea‘s combat system returns lightly tweaked and updated, cast in the Shining Force/Final Fantasy Tactics mold and loaded down with endless ways to tweak your characters. The Overlord Castle has a number of rooms for training, item purchase and upgrading through Item World combat, character creation, stat tracking, and a host of other functions to adjust almost everything in the game to your heart’s content.

All this is in service of the battle system, which is the usual grid-based affair. The ability for characters side-by-side to work together is now governed by their relationship status, so keeping units paired pays off nicely over the long run. Having a high-defense warrior jump in front of a healer to take the hit because they’re such good friends is a huge relief, when it happens. Careful tactical control of the battlefield involves creating a good loadout of characters, deploying them in ways that focus their force, and working towards the largest and most pyrotechnically impressive combos possible. 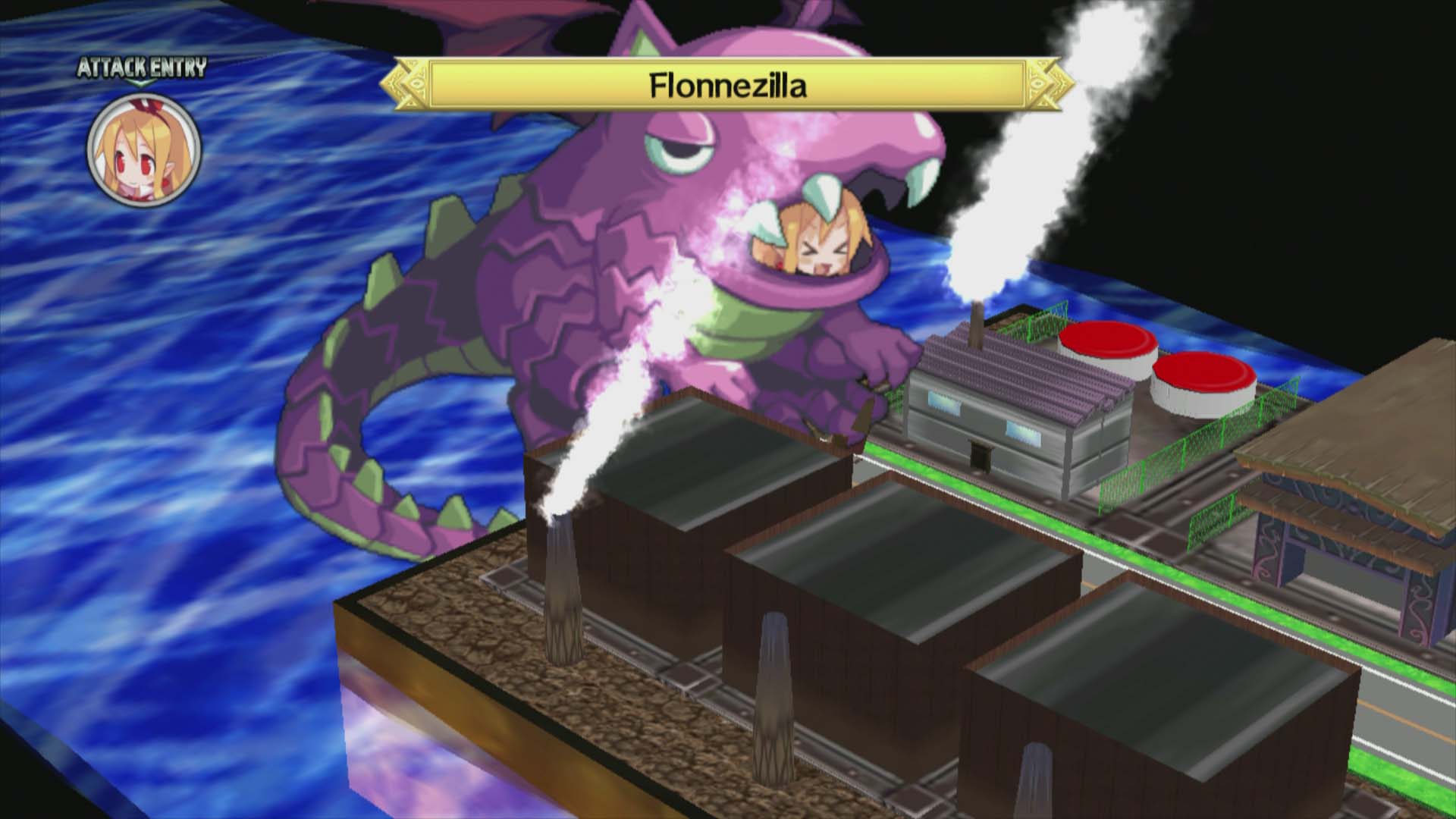 Basically, it’s Disgaea. The many new tweaks and upgrades change a few of its systems, but if you’ve liked the previous games then this will be for you. There’s prinnies, geo panels, the Dark Assembly, Item World, and a pleasantly silly story to hold it all together. The strategic combat is, as it’s always been, simple on the surface but as deep as you want to make it. In the years since the first game put Nippon Ichi on the map (not forgetting Rhapsody, but it didn’t come close to getting the same level of attention), Disgaea has remained a consistently entertaining battle-strategy RPG series. A decade later and it’s good to see that the fifth game in the series has, for better or worse, kept all of its traditions alive.