Video game peripherals have a long history of being absolutely terrible. For every multitap, you end up having eight Kinect Boats and other monstrosities made by someone who clearly has never played a video game before. The only good thing about these is the amazingly sarcastic Amazon reviews that tend to accompany the more egregious examples. Check out the following entry for the Kinect Boat and just try to resist the urge to write one of your own:

“It’s pretty cool actually. I was so sick of playing Adventures and looking down to see I wasn’t actually standing in a boat. That problems gone now, every time I look down and see my inflatable red river raft sitting on my carpeted floor I almost have to remind myself that it’s just a game. Immersion doesn’t get anymore immersive then immersing a red river raft into the wild rapids of your living room.”

You can expect a whole slew of these sorts of sarcastic comments to appear on the page of the latest hideous video game peripheral: The Hyperkin ComRad Gaming Audio Helmet Headset. The only reason that thing’s name is so long is they were hoping you fell asleep halfway through and don’t realize the last two words are “helmet” and “headset”. Once the words “helmet” and “headset” were uttered in the same sentence, someone should have been able to figure out this was a terrible idea and the project should have been shut down then and there. I have no idea who the target audience of this is even supposed to be. Crazy people? They don’t own an Xbox because the government is using it to spy on their bowel movements. 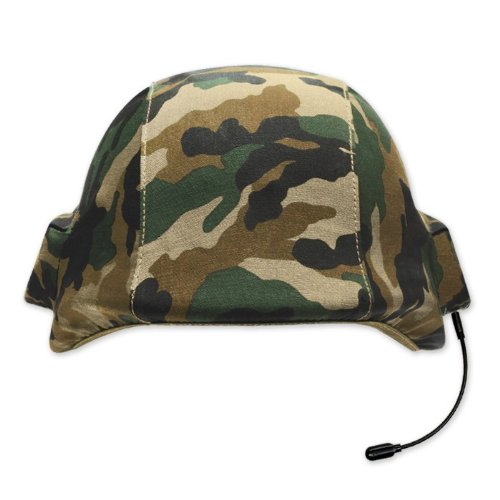 This is a real thing. It provides defense against headset slippage, nerf gun attacks to the head, and STDs because wearing this guarantees you will never be having sex again. It is compatible for the PC, Xbox 360, PS3, Wii and scaring neighborhood kids off of your lawn. The good thing about the helmet is it should hide whatever head injury you have to be suffering from to think a helmet headset is a good idea. The great thing is this isn’t slated to come out until September 27, giving you two weeks to get your sarcastic Amazon review written and edited. I’ve already got my rough draft ready.

“This is great for me because I used to have to stop my game and duck for cover whenever I got shot at in my dorm room. Luckily, now I can just keep on playing as the helmet keeps my head safe from attack. Any chance you can make some body armor with a Mountain Dew holder? My body is still exposed. Thanks Hyperkin!”