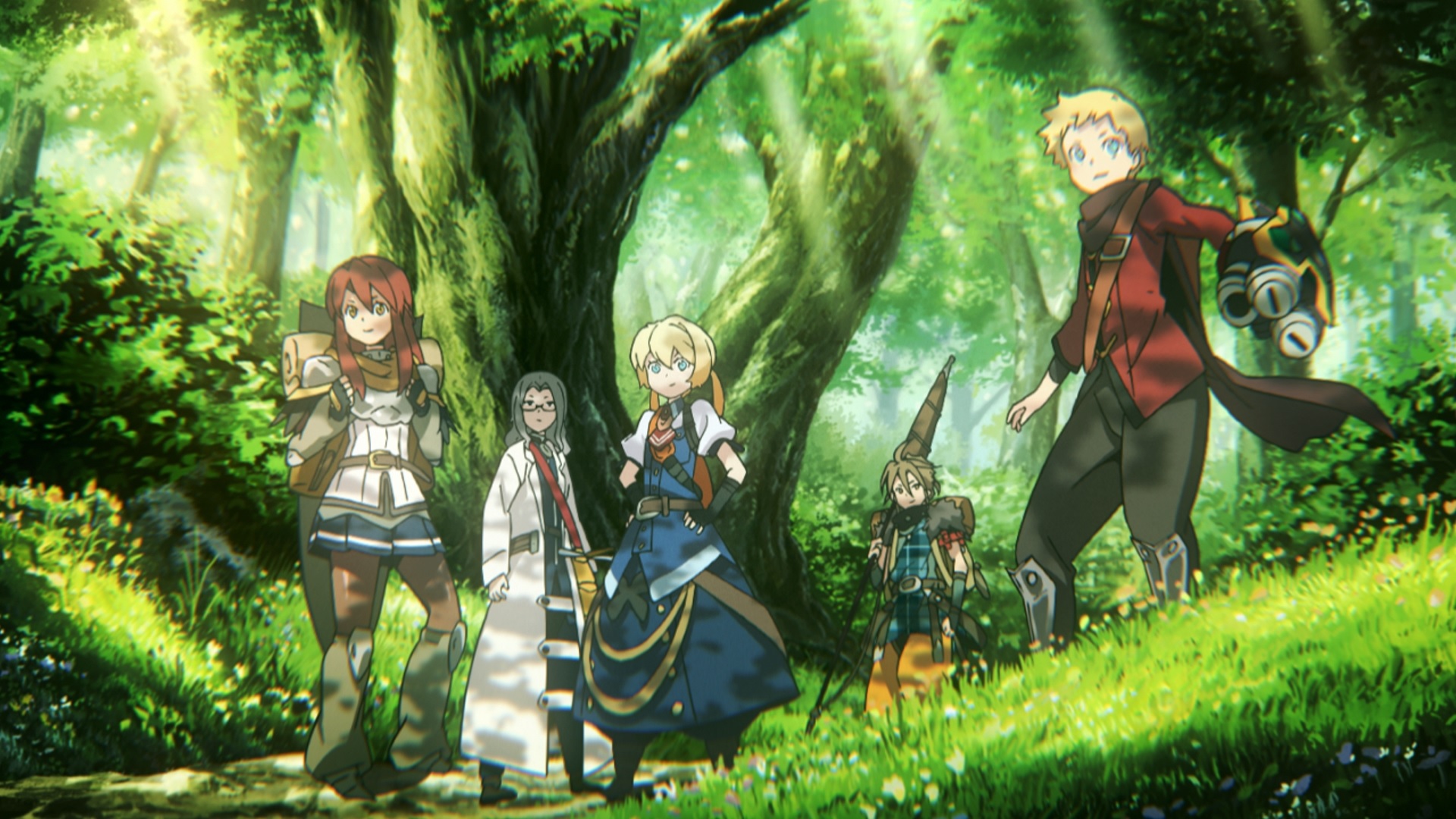 When Etrian Odyssey IV released earlier this year, we were convinced that Atlus couldn’t refine the genre any further. We felt that IV was the apex of the series, and that the developers simply couldn’t top the magical product they had on their hands with Legends of the Titan. But then The Millennium Girl comes along and shatters all of those convictions. As the epitome of the franchise, genre and everything they stand for, this latest Etrian Odyssey tale delves deep not only into dungeons, but into the hearts of its players, making for one of the most memorable games of its kind this year.

Let’s clear up the confusion now before we hit the ground running. Yes, Etrian Odyssey Untold: The Millennium Girl is a remake of the original title that appeared on Nintendo DS back in 2007. And yet, simply referring to it as a remake would be doing the game an injustice, as this is so much more than what goes into the very definition of that word. While the gaming industry is overcrowded with remasterings and reimaginings, Millennium Girl feels every bit as fresh as it does nostalgic. The most notable new feature is the title’s Story Mode. Right away, veterans will recognize that this new adventure has an actual narration, changing out the band of faceless warriors from the original with established heroes that posses their own personalities, backgrounds and classes.

Front and center in Untold‘s sequence of events is the budding champion from the Highlander clan. As the game’s main protagonist, players immediately discover a young gal named Frederica amidst the mysterious ruins of Gladsheim when the story first kicks off. And like any good JRPG, Frederica seems to suffer from a little bit of amnesia, leaving it up to the players to help her reclaim her mission and purpose. But the hero and his new found lady are not the only adventurers in the spotlight. We have a scatter-brained Alchemist, a Protector whose past is shrouded in a type of intriguing ambiguity and a no-nonsense Medic who heals the gang when they get trapped in a sticky situation to round out the party. Suffice to say, the roster here is diverse, breathing life into each of their compelling interactions to form a narrative that is at times lighthearted, and at others, dire and serious. It’s a duality that is accomplished quite well, despite the relatively cheery tone synonymous with the franchise. 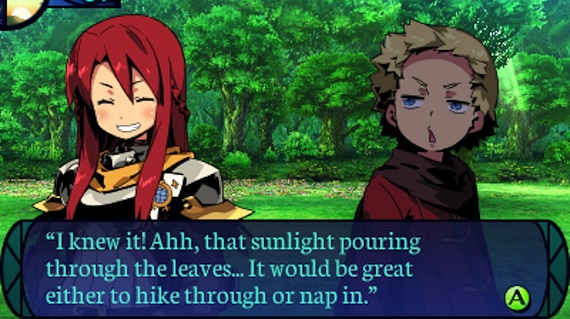 Nevertheless, the fact is this trope of characters makes for a story that is every bit as entertaining as it is captivating. While it holds true to many conventions of the genre’s typical storytelling devices, it’s well-crafted with solid pacing and interesting hooks that will make the dungeon crawling itself that much more meaningful. Actually, the game at large is better off because of the inclusion of the lengthy campaign. Cutscenes, talking segments and plenty of inter-party banter surprisingly never get in the way of the core experience that Etrian Odyssey has to offer. Those facets merely enhance the playthrough, actually, forming an experience that went from straight-up dungeon crawler, to refined roleplaying game complete with developed characters, motivations and plot reveals. It’s a strong set of factors that really emphasize what most are showing up for: the gameplay.

Now, for those choosing to play through the new Story Mode, they will immediately recognize that the game gives folks five preset characters with established classes — something the original never did. In providing these preset classes — two of which are new to the Etrian universe: the Highlander and Gunner — Millennium Girl makes it so that players have a well-equipped group of adventurers at all times. By doing this, the developers have implemented a system of checks and balances that certainly makes enemies feel less terrifying, and yet equally if not more satisfying to best, due to not having to worry about party make-ups getting out of sorts as a result of poor class decision on the user’s end. Speaking to classes more specifically, though, one of the more notable options available for players to personalize their play experience is that of a new mechanic in the place of dual-classing. Friends, enemies and chests now provide “grimoire stones,” which grant each party member the choice to equip one at a time. These stones allow characters to adorn a new weapon type and bonus skills to boot. Since stones can only be equipped or unequipped in town, the system is far more flexible than the dual-classing of old, with players being able to adjoin three stones into a single one to increase their stats. Grimoire stones will be a blessing for those looking to change up the preset party, as it takes no time to create the stones you need.

Of course, not everything in Millennium Girl is about the new story. Outside of the praised narrative, there’s the Classic Mode, a feature that ultimately strips the game down to its fundamental being, giving folks the same type of white-knuckled, tough-as-nails experience found in the original game. Meaning to say, in this way, players are given a nameless lot of fighters and free reign to decide their classes and names in addition to the other customization options found in all Etrian games before it. This mode will feel the most familiar to franchise veterans by retaining all that made the series such a special RPG in the past.

But let’s talk about combat for a minute. Since much (read: most) of the game will be spent taking down foes with the slice of your trusty blade, it’s important to discuss what to expect from Untold in this regard. So, if one has played any of the previous EO installments, they will instantly know what they’re in for here. In fact, Atlus has taken the if-ain’t-broke-don’t-fix-it approach, and the game shines because of it. The battling is every bit as challenging and deep as it was before — it’s still the type of combat that will end in a player’s failure if they go into it without any kind of forethought. Thus, spamming the same set of basic attacks and adopting general willy-nilly tactics will surely end poorly; therefore, things only go well in Millennium Girl when there’s a sound strategy involved — a staple that has made the series such a treat to play in the past. Thankfully, classes (in either mode) have plenty of abilities to learn, making war exciting and dynamic, and leaving dull battles at the door. 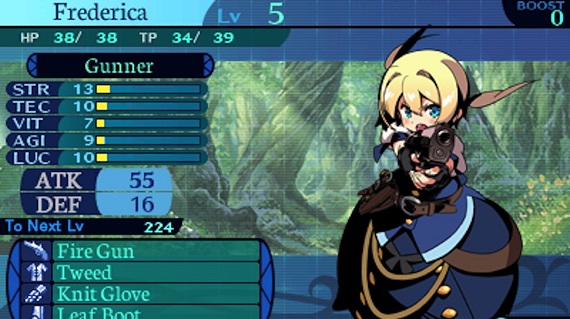 But, let’s be honest here, we all play Etrian Odyssey for the dungeon crawling itself. There’s something intrinsically rewarding about delving a labyrinth and mapping it to the bottom screen via your trusty stylus, dropping icons and signal marks along the way. It’s worth mentioning that the dungeon layouts have been overhauled and improved in Untold. Of course, there’s no doubt that a few will recognize some of the dungeons’ design assets from the original title, but the truth is, those moments are few and far between. A quick side-by-side comparison will show players that labyrinth layouts are in fact almost entirely different, making Untold‘s dungeons new even to returning individuals. In essence, the developers have held onto the best parts of the original’s concepts, and reworked those that didn’t resonate so well in order to create new mazes that are diverse and actually interesting. This philosophy essentially marries the high points of Etrian Odyssey‘s labyrinth with fresh, sounder designs to complete the package. What this means in the simplest of terms is that dungeons are simply more fun and less headache-inducing than ever before, and clearly leaps and bounds beyond anything that EO1 had to offer.

So outside of the solid gameplay mechanics and story, we’re left with the game’s presentation. From top to bottom and no matter which way you cut it, Untold is radiant in its audio and visual department. Definitely the brightest game of the bunch, just in terms of sheer aesthetic vibrancy, it’s also the crispest. Graphic quality is pure, character designs are most imaginative they’ve been, and environments are varied to an impressive level. The 3D is also remarkable, perhaps one of the few titles that have used the tech well enough to make us actually want to play the game with it on. The animated cutscenes handled by Madhouse are beautiful as well, tailored to the desires of anime enthusiasts of the world. In addition, there’s a soundtrack that is every bit as heartwarming as all of the other series entries. It’s whimsical when need-be, pulsating during intense FOE encounters and emotionally-moving during the heavy narrative skits. To put it plainly, it’s the best sounding and best looking Etrian Odyssey yet, though only a marginal upgrade from IV‘s illustrious sheen.

If Etrian Odyssey Untold lacks in any way, however, it would be in its borrowed visuals from Legends of the Titan. Since IV just came out a few months ago, people might not think the game looks new enough when first starting up the adventure. Through this evocation may come burn out, as we are certain there are gamers out there who played a ton of IV, and subsequently the mere aesthetic similarities between the pairing may be too much to handle right now. The shared art assets won’t do those particular folks any favors, either.

In the end, Etrian Odyssey Untold: The Millennium Girl feels less like a remake and more like a full-fledged sequel. The game has been redesigned with the player’s enjoyment in mind above all else. Its goal is to provide a gameplay experience for all types of folks, while never sacrificing one element for another that would alienate the hardcore or the newcomer. That’s a feat in and of itself for the first-person, dungeon-crawling JRPG genre. That aside, Untold benefits from combat that is deep and a rewarding story that’s the most compelling of the bunch. This is refinement personified, another excellent addition to the 3DS library and one of the most solid roleplaying games of the year. Missing out on Millennium Girl would be unwise and, for lack of a better term, a downright travesty for series and genre fans. For a great portable roleplaying game, folks really needn’t look any further.