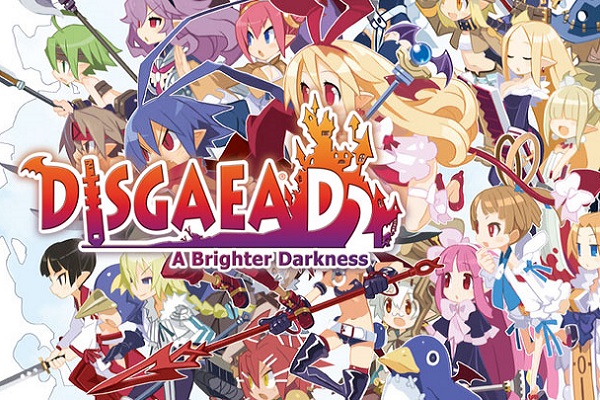 It has been a long time since the death of King Krichevskoy, the once great and wise leader of the Netherworld, and a long time since his son, Laharl, claimed the throne for himself as the self-titled, undisputed Overlord, as well. Sure, there are moments in Disgaea that remind me of how much spare time I truly have, but such is playing a virtual-chess of sorts with an absolutistic brat and his band of fiendishly off-beat sidekicks. These moments, though far from habitual, more often than I’d care to admit involve a procedural journey through an objects dimensional plane. It has been over ten years since I’ve cared about an SRPG or its cast enough to leave my own world willingly, and while my moments of disheartening self-doubt can likely be traced back to a sequence of torturous, long-repressed memories by a state-qualified psychotherapist, my never ending quest to reach level 9999 lives on.

In celebration of their 20th anniversary, Nippon Ichi has restored one of the most likeable casts of characters in SRPG history. Laharl, the punk-prince of perilous pain, Etna, his partially-loyal and witty second in command, and Flonne, the angelic do-gooder of hell, all make their long-awaited and triumphant return in Disgaea D2. The characters have largely remained unchanged, other than some minor adjustments in their appearance (such as the inclusion of pants for Laharl and shorty-shorts for Etna — sorry boys), and make for the most amusing Disgaea cast in a long while. 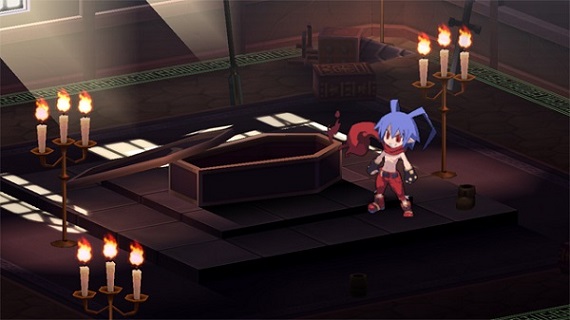 Disgaea D2: A Brighter Darkness is the direct sequel to the original PlayStation 2 title released back in 2003, and brings with it the fond memories those metaphorical retracting 12 step ladders and half eaten AA chips couldn’t manage to produce over years of monotonous meetings. The story picks up right where it left off, over ten years ago, and our beloved pain-in-the-ass Laharl has since claimed the Netherworld under his ruling fist through a string of murderous acts — and a courageous quest that saved the Netherworld from total annihilation. But despite his most recent and ongoing efforts, a strong lack of respect for his position on the throne is as present as possible.

Only after Laharl demands his seemingly-unfaithful accomplice, Etna, to erect statues of his likeness to assert his dominance across the lands — and continues to brat it up like a disgruntled child actor-turned-security guard — the true opposition begins. In an attempt to reach utter and ultimate regard, Laharl spends the game’s opening moments destroying the stars in hopes of displaying his power as leader of the demon world. In his less-than-successful conquest, however, he does little more than destroy a garden of mail-ordered celestial flowers — a plant that simply can’t grow in the Netherworld… or can it? 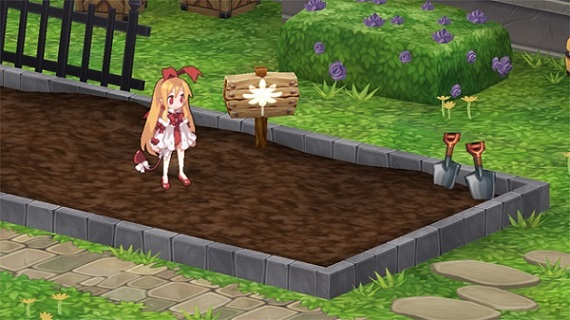 Soon, what began as a simple mission to produce some adoration for the acceptance-thirsty wannabe-Overlord, quickly turns in to a blooming disaster of gender-bending proportions. With evil-dimensional conspiracies afoot, the Netherworld needs saving again, and what better team than a walking attitude, a skimpily dressed demon and a fallen angel with goody-good feelings and a clueless demeanor. It’s a whacky, convoluted tale of much-expected anime-nonsenses, and the plot slowly spirals into superfluous territory, lasting just long-enough to feel complete, but never reaching the jolting heights of its respective predecessor. More often than not, however, it manages to do its part in pushing the game forward without a hint of staleness, and proposes several fascinating points that while are never truly explored in depth, elevate the enjoyment of the experience immensely.

Despite the return of some familiar friends, the newly introduced characters don’t quite manage to strike the same chords that the accompanying lineup of the original did. Thankfully, even the less interesting dialog is delivered with as much conviction as you’d expect from a demon (see Mercedes McCambridge), salvaging the least eventful points in the game with a wisecrack or two. The Disgaea series has always had a sense of humor, constantly parodying itself at every opportunity; laughing along with its borderline-corny jokes as its absurd story unfolds in often unexpected ways. But much like an out-of-shape boxer fighting on his last ounce of liquid-pride, Disgaea D2 misses nearly as often as it hits. Those misses, however, unlike the cringe-worthy dialog of Enchanted Arms, or the awkward everything of Ar tonelico, are merely comical missteps, rarely taking away from those hits of hilarious irreverence. While not everything is relevant, funny or even meaningful to the events happening on screen, it’s almost always interesting enough to retain the skip buttons virginity — at least the first time around. 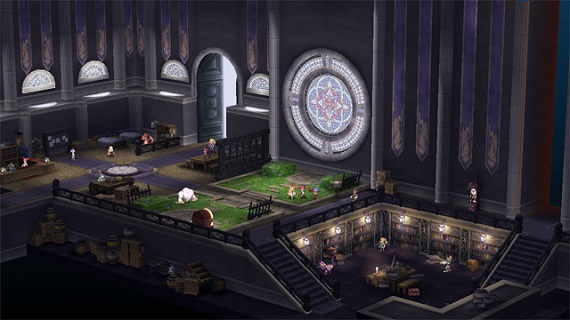 If the story is the potatoes on the Disgaea buffet, the meat would surely be the award-winning gameplay, right? Where else can you sink 500 hours without making any progress in the story, after all. Thankfully, the brutal difficulty that’s only matched by the time-stealing character customization options, near endless content and a scarily high level-cap is back in full force. Many new features succeed those of past iterations as well, and a variety of modifications and improvements have been implemented to help with any potential issues of balance. The basics of the game have largely remained intact. You’ll still bribe the Dark Assembly — or beat them in to agreeance — when something needs to be done, however bills can now be passed using HL rather than Mana.

The famously elaborate customization features have been expanded as well. In addition to equipping weapons, armor and items to improve your characters stats as seen fit, players are also able to select an Evilty trait. The Evilities available range from resistance to certain attack types and simple attribute increases, to more specific and strategic effects. More compelling are the improvements made to existing customization mechanics, offering a far more streamlined and accessible system for nearly everything. The randomly generated item worlds also make a return in D2 in the form of an Item Sea, a similar system that now has players traveling through items by ship. Minor updates have been made, including the addition of Bonus Stages throughout the levels — as well as the removal of Reverse Pirating. As with previous entries in the series, it’s entirely possible to invest an unlimited amount of time gathering bonus items, leveling your characters, and playing through an endless supply of stages without progressing the story at all. 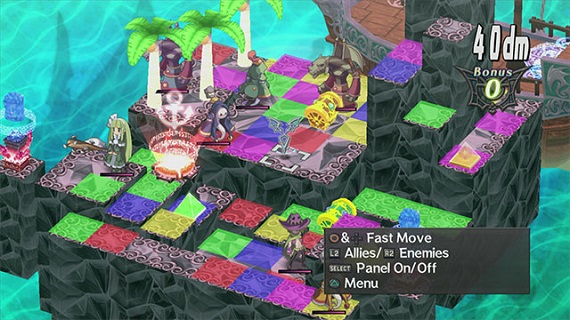 Monster Mounting replaces the Magichange system, and has humanoid characters hopping on top of monsters, allowing them to attack as the mounted creature absorbs any damage received by enemy units. Relationships can now also be developed between characters, and will have a direct effect on the strength of collaborative attacks — including those of Monsters you intend to mount (insert Rule 34 joke here). The relationships are determined by a heart scale of 1 to 5, and can be improved by offering items, assistance and collaborative sequences during battle. HP and SP can now be increased up to 99 billion, which only furthers the replayability for those crazy enough to bother. Weapon Mastery also makes its return, and players can now determine a spell-casters primary element as well, offering more freedom than ever.

The best new addition introduced in Disgaea D2, however, comes in the form of a unique cheating system titled “Cheat Shop,” which coincidentally does exactly what you’d expect — allows you to cheat. While initially not very useful, as you progress through the levels the Cheat Shop will allow you to modify certain attributes such experience, Mana and HL received in battle, simply by switching certain percentages for others. Do you have a ton of Mana stored but would really like to toughen up your characters? Switch them out. Would you like items to drop more frequently rather than have your units level faster? Switch them out. For instance, earlier in the game I lowered the percentage of HL I received in exchange for more experience points as to more easily advance in level to tackle a tricky stage. It’s a system that encourages power-leveling, and never penalizes experimentation. 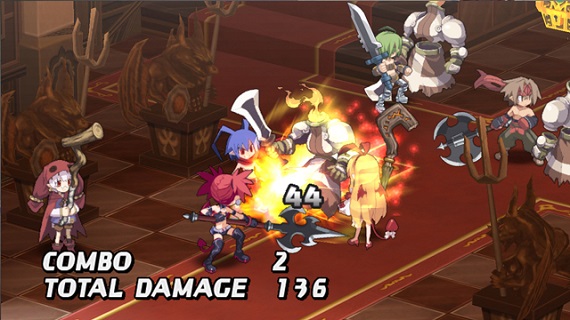 While Disgaea D2 brings about plenty of changes, simplifications, and other much welcomed modifications, the grid-style battle system remains the same for the most part. Players will take the first turn, choose positions for their fighters, witches, martial-artists or monsters and execute attacks accordingly. Unlike many strategic grid-based games, every turn plays out in its entirety once all moves have been selected — both for the player and the enemy. Players can still lift and throw characters, allowing a unit to travel a greater distance for an attack — although now it’s possible to throw them diagonally. You’ll still be using quirky-yet-useful items, exploiting Geo Effects — the map-based buffs and debuffs that can either harm your units or be used to your advantage through careful planning, and form powerful collaborative attacks to more efficiently eliminate foes.

Graphically, Disgaea has never looked better, although that isn’t as hardy a compliment as one would imagine. While the high-definition, picturesque backgrounds are stripped of some visual flairs we’ve come to expect from the series, they do offer a much cleaner and basic style reflecting that of the original. The characters are larger and pop with more vibrant colors, and the maps are beautifully drawn. But if you purchase a Disgaea game for its pretty graphics you must have just upgraded from a Dreamcast. While the lively colors are pleasing to the eye, they’re far from exceptional, but are acceptably attractive in every possible way. Magic is bright and creatively filmic, while collaborative attacks are explosive and fun in both tone and display. Many visual improvements have been made to the menus as well, stripping the unnecessary clutter for a more streamlined and equally informative experience. 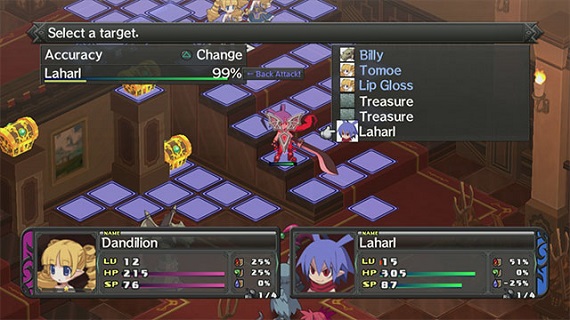 Few games in recent years offer the immeasurable amount of content offered in Disgaea D2. With a 35 hour campaign, multiple endings to complete, side-missions, an expansive and randomly generated item world, thousands of character customization options and endlessly replyable levels, the series didn’t really need to make many improvements or changes to remain a true value. But it did, and it did so with such loving execution that D2 has instantly established itself as the new SRPG standard. Sure, some features have been downgraded, simplified or removed entirely, but the core gameplay has been refined in the most pertinent areas. If an addictive, fun and hilarious game is something you’re in the market for, don’t look elsewhere — unless that particular shop is sold out of Disgaea D2.