The game starts off with some monsters attacking the Schwert Kingdom. Princess Plume comes to aid her soldiers, but this proved to be futile. From here the story is a somewhat light hearted tale of Plume trying to protect her kingdom from the monsters that threaten it and restore peace to the lands. Not exactly the most original story around, but it’s still a cute adventure if you like the standard NIS fare. In addition to the games main story, you can also talk to various people around town. Sometimes you’ll run into a side story, which adds some depth to the characters around you and helps add some character to the story.

Despite Battle Princess of Arcadias being a story driven game, you can also expect a fairly deep gameplay experience. For starters, there are ten playable characters that use one of the seven different weapons. The remain three characters share a weapon, though they each have their own fighting style. Like Plume does a slash, slash, slash, aerial spin (two spins) combo, where as Havuerka does a slash, slash, handle jab, fury jab combo with the same inputs.

Besides having diverse gameplay, there are also three different types of stages to master. The first is your standard beat em up stage, which works the same as any arcade game from the 90’s. You move forward and enemies attack till you get to the end. The next type is formation battles, where you need to gather your troops to find off another army. These stages are a little different, since they require you to both lead your army and fend off solders. These include things like when to attack, when to defend, recalling your troops to have the advantage and things of this nature. These stages can also be pretty tricky, since you have to defeat waves of enemies to even have the opportunity to change your course of action. Finally we have boss fight, which work the same way as formation battles. You have various courses of action and you must work together to defeat whatever monster stands in your way.

Up to this point you probably think Battle Princess of Arcadias is a great game, but it’s actually a complete mess with some interesting ideas. The biggest problem is how poorly paced everything is. Like I didn’t have to use a single potion till the end boss, due to how stupidly easy it’s to level. To put this into perspective, I started the fourth post game dungeon with a level 88 and 75 character and they jumped to level 97 and 78 respectively. This was all accomplished in a mere 20 minutes, which doesn’t even include the first segment I did with my level 99 (the cap) character. Needless to say, a lot of time isn’t required to max out all the characters. To make matters worse, the cash system is an absolute joke. 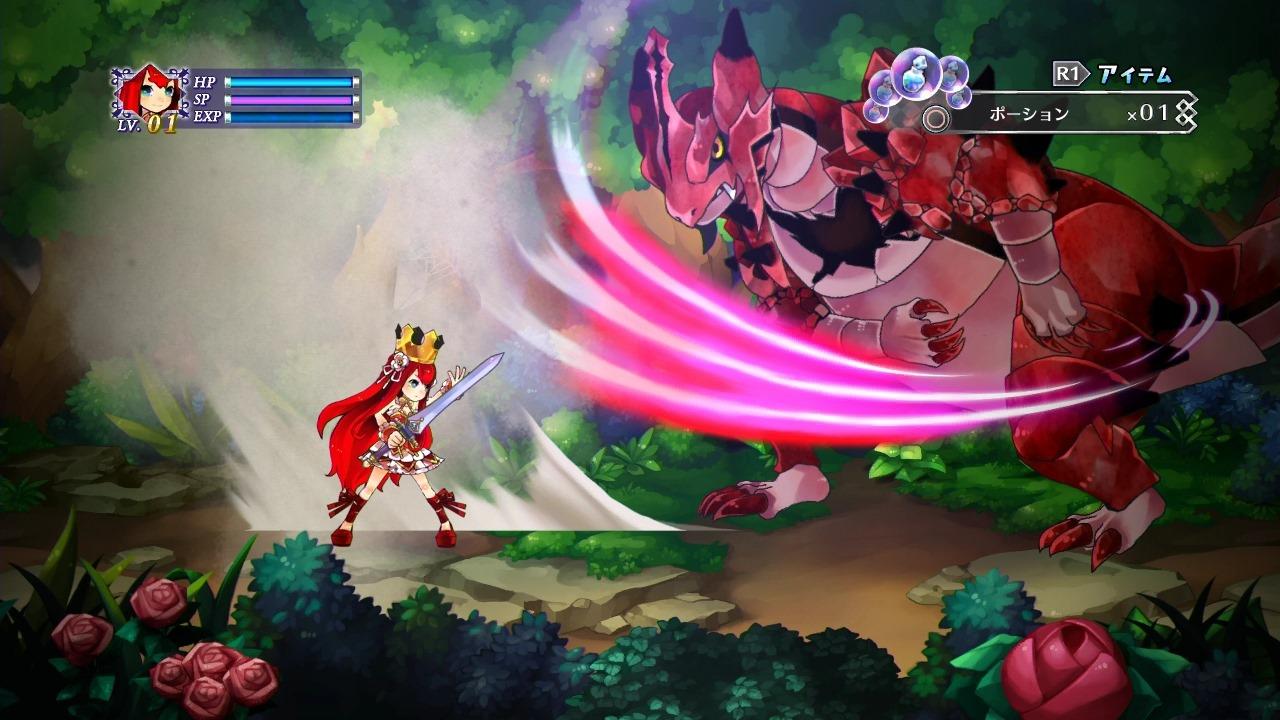 Come the end of the game, I had so much money that I was able to buy the max amount of every material for sale (up to 99) and it only cost around 1.3 million. When you consider the aforementioned dungeon gave roughly 600,000 a run, it goes without saying that you’ll never need to farm for a cent. This is nice if you want to upgrade your weapons or increase your troop levels, but doing so might result in breaking the game.

Prior to fighting the final boss, you must defeat five level 45 armies in a formation battle. This is the last formation battle in the game, so there is absolutely no point in having a level 99 or even a level 50 army. When I replayed it with my level 81 gun army, who only had a slight edge against one of the five armies, it was total domination. Not only did all five armies (250 total soldiers) fail to kill a single gunner, I did this with a single command. Sure the command system was never that crucial to success, but this is just ridiculous!

Come the end of the game, there really isn’t a reason to keep playing. Like there are also 10 star weapons, but no real point when you can break the game without them. You can try the five challenge stages, though there isn’t much challenge at level 99 or when you can equip 99x 50% healing potions. However, completing them all offers something of a New Game +, where the game restarts on a higher difficulty level.

Battle Princess of Arcadias might look like a great game, but it’s actually far from it. This is a real shame, since the combat system is surprisingly deep. Despite that, it seems like Battle Princess of Arcadias is hell bent on making the game as easy as possible. Blocking/tactics being discouraged, constant leveling, lack of post game content, the ability to make yourself stupidly powerful, an endless supply of cash and enough potions to make dying seem impossible, results in the game feeling rather hollow. Combine this with a lack of enemy diversity and you have an experience that no one is missing out on. 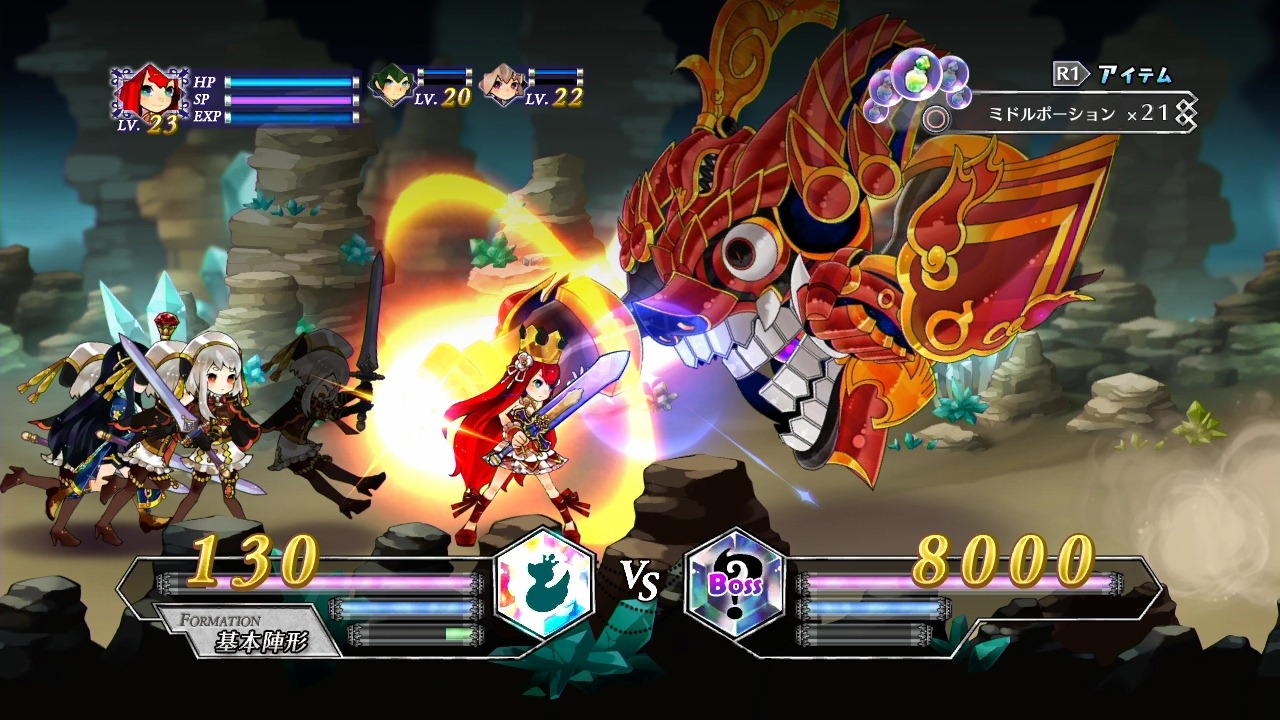 Like most Japanese RPGs, you simply can’t get the full experience unless you can read Japanese. Obviously, this is due to the story being impossible to understand, but also slightly impacts the gameplay too. Most weapons and accessories have special abilities, which you won’t be able to understand without the aid of the internet. This will put you at a serious disadvantage, as weapons dropped by enemies have additional abilities you can unlock via materials you can find. Since every weapon has a finite number of crafts or upgrades allowed, you might end up missing out on something good or applying something you simply have no use for. Obviously, this also makes it harder to find specific materials you need, since you won’t know what you’re looking for, nor will you have an idea of where it’s located.

As mentioned in the overview, however, you can simply level out of all your problems. Battle Princess of Arcadias has a very easy to understand combat system and can be conquered by using the same attacks like Dynasty Warriors. Formation battles/bosses are also very easy to understand, due to every action having a simple and easy to grasp image. All the inputs have obvious indicators, like you can tell in the images above that circle uses items/gives commands and R1 opens a menu. The rest of the commands follow the same sort of indicators, so it should be pretty simple for you. Similar to this, all the commands have fairly idiot proof commands. Sword is attack, shield is defend, circular arrow is return and star is special attack. So your only real limitation is going to be the story and understanding what abilities/bonuses your equipment gives.