Killer Instinct ended up being a huge draw at E3 2013, garnering quite possibly the biggest lines at the Microsoft booth, but it was missing something: a fully-licensed FightStick to play it with. Mad Catz is looking to remedy that, as Major Nelson has tweeted a picture of a Killer Instinct branded FightStick that greeted him at a meeting today, stating “walked into a conference room and this #XboxOne accessory was there as well. This will be a good meeting.”

The Killer Instinct FightStick Tournament Edition 2 was briefly mentioned and shown on stage during Microsoft’s E3 2013 briefing, but not much as been said about it and the artwork looked basic and temporary. The newly-photographed version sports a new look that seems to be more fully-realized, although the image itself seems to be a non-final printing. It’s quite possible, however, that this will indeed be the image we see in the final version of the stick, albeit more professionally produced..

We’ll follow the story and report back if any addition information is released. 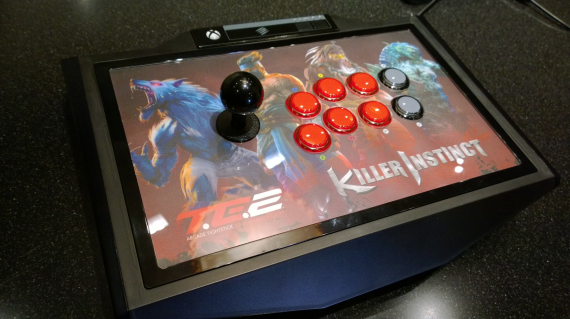