In the history of horror video games, perhaps no single date is more important than March 22nd, 1996. That’s the day Resident Evil (or Biohazard to our friends in Japan) was released, forever changing horror gaming.

Whether or not you actually like the original Resident Evil, it’s difficult to deny that its puzzle solving, ammo scavenging, against all odds style of survival horror (which was admittedly heavily influenced by Alone in the Dark) showed developers around the world an incredibly realized template for how to design a horror game, leading to a renaissance of sorts for the genre that would eventually give us one classic horror game after another. Even the best modern horror games can thank Resident Evil for the way it proved not only how effective horror gaming could be in a new technological age,but how commercially viable it could be as well.

Unfortunately because of the significance of that release, many of the horror games that came out before Resident Evil tend to get ignored and even lost to history. That’s a real shame as, even though that time period could be considered the dark age of the genre, some of those games managed to not only be ahead of their time, but to this day remain unique classics. So if you’re a fan whose never really explored the deep dark roots of horror gaming, here are some of the best horror games released before 1996’s Resident Evil.

I know what you’re thinking just by looking at that screenshot. You’re thinking that you can accept  that a text based game was once scary in a time when people didn’t have anything greater to work with, but have serious doubts regarding both the effectiveness of its scares today, and if a modern gamer would be able to suffer through its low-tech (near no-tech) presentation to even be able to enjoy it. While I can’t sit here and make text based games age more gracefully with the power of words (though that would be an oddly appropriate super power), I can tell you that those who brave the trip outside of their comfort zone will be rewarded with one of the pure scariest games of all time.

By far the biggest reason for this is the way the game initially doesn’t present itself as a scary story. Were it not for the inclusion of the word horror in the title, you’d probably be convinced early on that this game is going to be about a student trying to retrieve a lost project, while a raging blizzard forces him to stay on campus. The game’s original packaging even included “feelies” like a student ID from the fake school and maps of the campus like you’d get at freshman orientation, to drive home that unassuming set-up. It all proves to be a smokescreen, though ,that conceals the game’s true nature as an interactive horror novel that deals with more and more disturbing subject matter as you go along. The horror elements in the game may eventually become the focus, but the sly way they ease themselves into the story make it so you never really feel at ease even once you accept their presence.

Many works of horror preach the idea of what you’re not seeing being scarier than what you are seeing, but few actually execute it in a satisfying manner. That The Lurking Horror accomplished exactly that with seeming ease way back in 1987 makes it not only entertaining, but historically notable.

Released in Japan just one year before Resident Evil, Clock Tower has long suffered from middle child syndrome as, even though its design broke away from many of the horror games that came before, quite a few of its core elements also would appear in Capcom’s soon to be revolutionary title, leaving Clock Tower in an awkward position of being more progressive than the games that proceeded it, but not quite as refined as what would come after.

However, if you actually play the original SNES and PC builds today, you may be surprised to find a game that has in many ways aged better than the original Resident Evil for Playstation. It’s story of two young women who find themselves trapped in a mysterious old house may be a traditional horror set up, but proves to be a loving homage to both the slasher and haunted house genres that rarely feels cheap or cliché. It’s also a story that proves to be incredibly effective, especially when you factor in the game’s lack of combat, and the terrifying presence of an unstoppable, and scissor wielding, stalker named Bobby who feels like the spiritual successor to Resident Evil 3’s Nemesis character.

Clock Tower reminds me of watching the 1963 classic horror film The Haunting, in that it’s simple set up and aged looks lull you into a comforting sense of nostalgia, but ultimately just serve to set you up for the far from out-dated scares that lie beneath. For those interested, the entire Clock Tower series is actually quite strong (Clock Tower 3 is a particular highlight) but, if you’re a true horror gaming fan, its the original you should seek out.

I Have No Mouth and I Must Scream 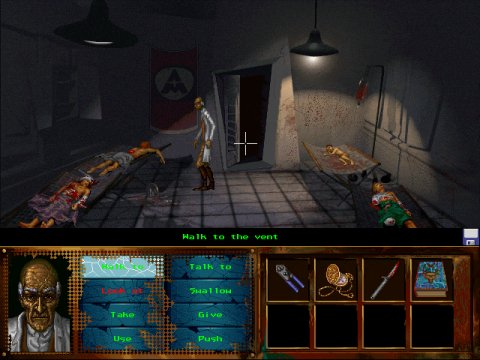 As much as I love good storytelling in horror, I’ve never really felt like horror relies on a good story to be effective. Much like comedy, it’s more dependent on timing and atmosphere than any plot details, with the story often serving to loosely string together a series of events. There are exceptions, of course, where the story serves as the best part of the experience, but they are not common and in horror gaming circles are even rarer. The video game adaptation of the short story I Have No Mouth and I Must Scream, however, is gaming’s prime example that good stories in horror do exist, even if they are exceptions to a rule.

Sometimes I don’t like providing story details in order to preserve the experience, but in the case of I Have No Mouth, it’s actually futile to try to summarize the incredibly complex plot. The very basic set up sees an all knowing computer that caused the apocalypse torture five people for over a century, before sending them on desperate adventures to further its amusement. Whereas most horror games inspire the feeling of being too frightened to proceed by throwing a series of jump scares at the player and setting them in a tense world, here the feeling derives from the constant narrative presence of the worst elements of humanity. This game take some of the darkest subject matter you could possibly come up with, and keeps it right in the forefront where you can’t avoid it.

Far from exploitation though, I Have No Mouth explores the implications and effects of this subject matter with a level of subtlety and maturity that manages to serve as the only aspect of the entire experience that could be called beautiful. This game leaves a psychological scar unlike any other, and to this day stands alone in terms of horror game storytelling.

It Came From the Desert 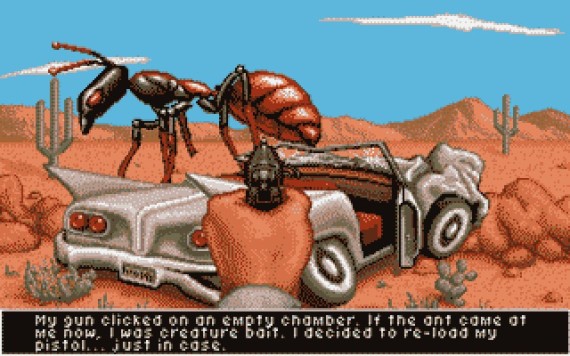 Considering how much inspiration horror games derive from horror films, its kind of odd that the 50’s sci-fi B movie period of horror is rarely explored in gaming (the Fallout series being a notable exception). Sure, it wasn’t the high point of horror film history, but the unique imagery and tone those films created, make them among the most visually and spiritually iconic of any movie genre.

It Came From the Desert is one of the few titles that draws its influences from that era, and actually uses them in a way that feels like both a gushing tribute, and quality original entrant to the genre that inspired it. It begins with a pretty standard set up of that sub genre’s tales, as a meteor crashes into a small desert town and causes the local insects to become gigantic and hostile. After your character discovers this, you must investigate the reasons behind this occurrence, and convince the locals it is true so they’ll call in the national guard in to help. While the game consists primarily of mystery point and click adventure game elements then, there is a surprising amount of action here as well that ranges from fighting the local greaser gangs, to flying a crop duster in an effort to ward off the impending giant ant forces.

Pleasantly active gameplay aside, the real draw here is still the 50’s sci-fi world. Every character, scenario, and environment is straight out of that genre’s playbook, but they’re incorporated into the game with an unexpected level of care that allows them to serve as effective building blocks, rather than a constant stream of blunt references. Outside of a few moments, I wouldn’t call this game necessarily scary, but for so perfectly executing a rarely explored style, It Came From the Desert achieves must play status. 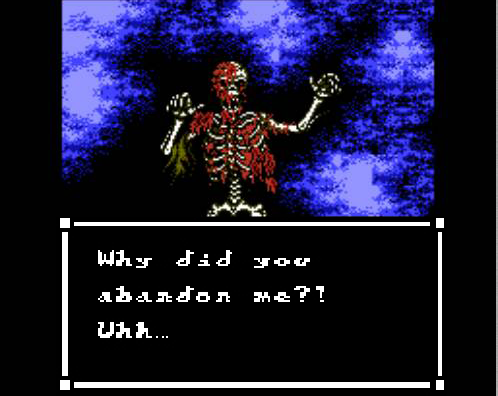 A Japanese only release, this Capcom NES game eventually crawled its way out of near obscurity a few years ago when it was discovered by Western gamers that this was essentially the 8-bit forebear to Resident Evil. Featuring the same mansion setting, a very similar inventory system, the door opening loading screens the latter would become iconic for, and many other identical elements, the resemblance between Sweet Home and Resident Evil is obvious long before you discover that Resident Evil was originally intended to be a sequel to Sweet Home.

Far from an historical footnote though, Sweet Home is a game that needs no context to be appreciated. It’s styled in the same vein as many JRPG’s as it features characters with unique abilities and stats, turn based battles, and menus and battle screens reminiscent of Dragon Warrior, but managed to leave its own mark at the time thanks to some unabashed uses of pure horror elements. Based on a less than spectacular movie of the same name, Sweet Home may feature much of the usual roll call of baddies like ghosts and zombies, but styles everything in a way that is simply demonic and usually quite unsettling. While its easy to say that a large number of the scares derive from the fact you aren’t expecting a game like this to exist on the more kid oriented NES, much of the game’s design is in fact creative enough to remain shocking to this day, while certain elements and scenarios make it very obvious why this game was not released to the more sensitive Western markets.

Sweet Home may be dated in its gameplay, but this was one of the first games ever that set out to create a truly horrifying visual experience and succeed. If you’re one of the many people reading this that didn’t get a chance to play Sweet Home as a kid, doing so now feels like taking a surrealist trip down memory lane that somehow leads to a place you’ve never been before.