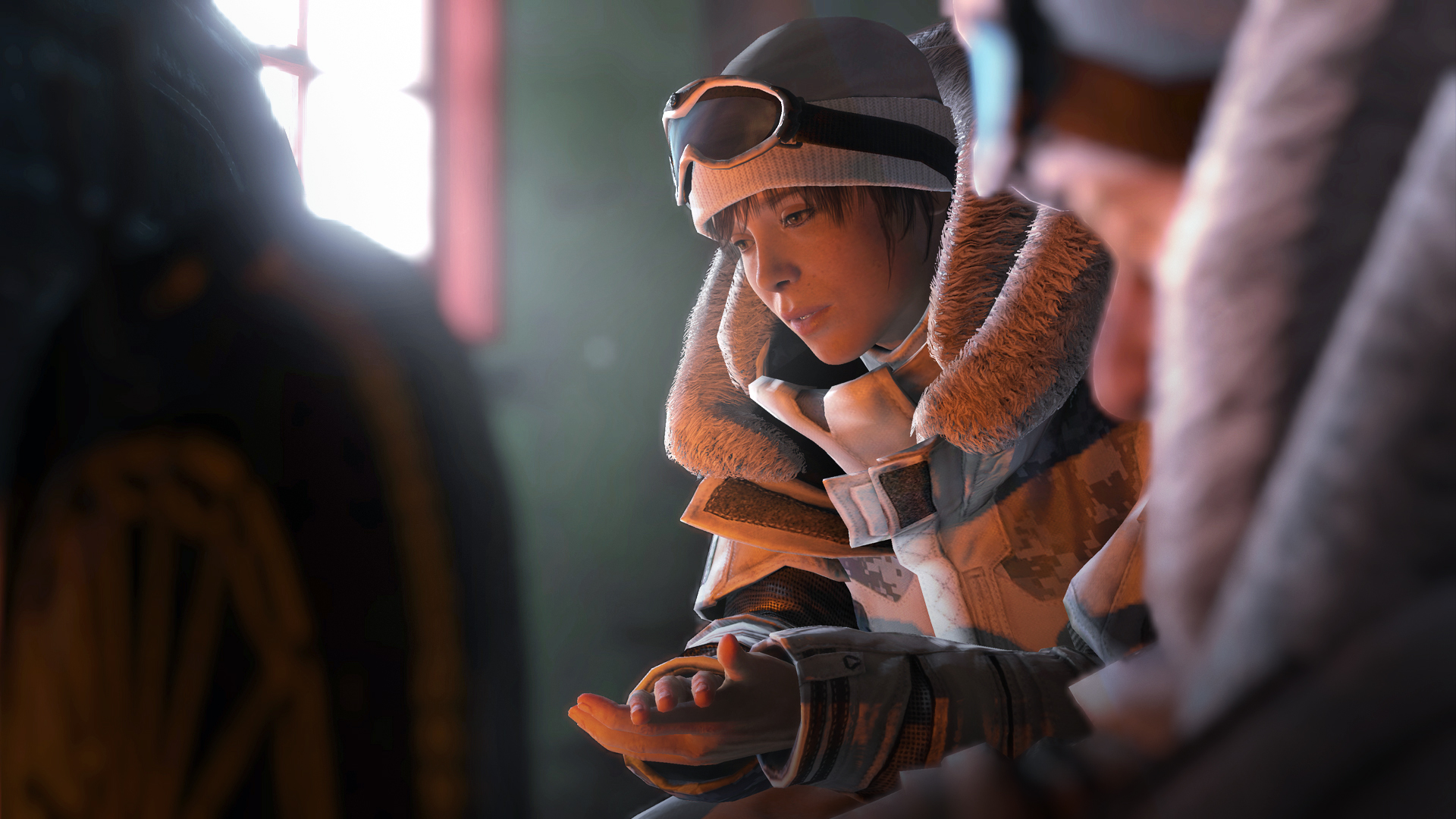 Approaching a Beyond: Two Souls review is a lot like approaching a film review. Instead of basing it on standard video game conventions like gameplay, weapon types or boss battles, one must instead reflect on the dialogue, climax and performances. While there’s been some high caliber voice acting performances in video games, never before have they been judged on the same level as live action forms of media. By signing the talented duo of Ellen Page and Willem Dafoe, director David Cage showed a committal to delivering a sincere storytelling experience, a sentiment that is carried out through the duration of a game that feels cinematic in almost every facet. With gameplay supporting story instead of the other way around, Quantic Dream is once again challenging the notion of what a video game should be, now breaking away from the conventions almost entirely.

Beyond: Two Souls chronicles Jodie Holmes through fifteen years of her life, allowing players to take control of her at multiple points from past to present. While the concept of reliving somebody’s childhood and awkward adolescent period may not seem appealing, Jodie is no ordinary girl. From a young age, she has displayed paranormal abilities. While they’re at first taken as a standard imaginary friend, these supernatural events become increasingly troublesome when Jodie uses them to defend herself against bullies or wakes up in the middle of the night injured from “monsters.” Worried for her and their own safety, Jodie’s parents decide to send her to a government facility managed by Nathan Dawkins for diagnosis and monitoring. Nathan and an assistant named Cole Freeman become adoptive parents of sorts, studying Jodie as she lives inside the facility. 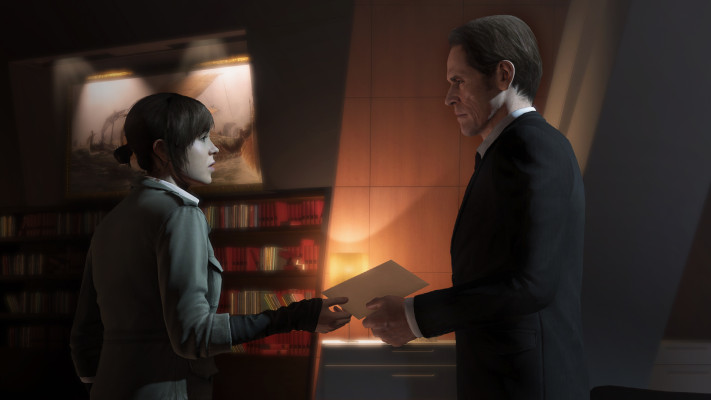 In reality, Jodie has neither an imaginary friend nor a ghost haunting her, but is instead linked to a supernatural entity named Aiden. Although Jodie has no control over Aiden, it usually tries to protect her from threats, even if it seems destructive in the process. Aiden can move practically any object and even possess living things, which can be a dangerous ability when uncontrolled. As Jodie grows up in the facility, she learns to control Aiden with the help of Nathan and Cole, eventually being able to harness the supernatural power. There’s always a delicate balance between child and test subject, however, with Jodie spending almost her entire childhood and adolescence confined to her chambers or doing tests. You frequently feel for Jodie, as she’s such a sweet girl in spite of not being able to live a normal life. This becomes even more clear when she attends a party with other gifted children and has some major adjustment issues.

As an older teenager, Jodie is called on by Nathan to save a government office after opening a portal to the Infraworld and accidentally unleashing deadly monsters. After this, the government realizes her potential and begins to use her for their own purposes, even recruiting her into the CIA and sending her into combat. Throughout the game, Jodie struggles to find her place in the world while at the same time seeking answers for the meaning and origin of Aiden.

The narrative is nonlinear, with the events of her life happening out of order. In fact, the first event in the game is near the ending and it’s rare that two moments from the same part of her life occur in a row, frequently swapping between her as an adult and a child. While there’s always detractors of non-traditional storytelling, it functions perfectly here and retains an aire of mystery throughout the proceedings, filling in plot details that make past events come full circle. As with something like Memento, however, the plot is structured so that even if one of the earliest occurring scenes comes near the end of the story, it contains a revelation that drives the plot forward. Furthermore, as the earliest scenes predominantly take place in one area and are slower, it helps balance the action in the game. To help you keep track of when events occur, a timeline serves as the transition/loading screen between chapters, filling in as you progress. 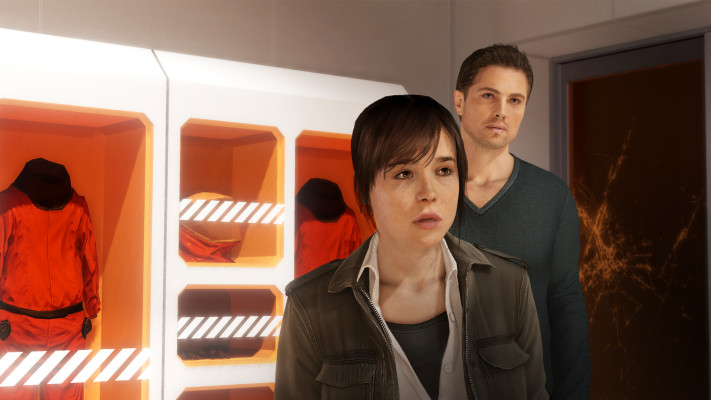 A good portion of the dialogue is driven by the player. During various points in a conversation, a prompt will come on screen giving between two and four options for what to say next. These range from conversation points to emotional responses, such as replying rudely or angrily. While most games with branching dialogue have clear good answers or bad answers, Beyond is more vague and it’s frequently difficult to decipher which is a “good” response. This makes playing the game seem more realistic, as just like in real life, you can intend to say the right thing, but instead end up offending someone, wondering what would have happened had you said something else. While in Heavy Rain or Indigo Prophecy there were some options that led to throwaway dialogue, practically every response in Beyond is as valid and well-written as the other options. I got through the game thinking I made almost all of the best conversation points to ensure the optimal story, only to realize that there were multiple other paths just as valid.

This is easily the best written script in a Quantic Dream game, with thoughtful beats throughout. The dialogue is elevated by fantastic performances from Ellen Page, Willem Dafoe and even Eric Winter and Kadeem Hardison. Willem Dafoe is especially on his game, turning in a thoughtful and sincere performance. Commonly in games and CGI films, there seems to be a slight disconnect between the voice work and characters on screen, but it’s almost always seamless here. You don’t feel like you’re watching Willem Dafoe and Ellen Page voice a character, but instead feel like they’re actually in the video game. They could have easily phoned it in, so credit goes to them for studying their characters and giving theatrical quality performances.

Besides a handful of modest dialogue-driven scenes, the game is split up into multiple setpieces that take place around the world. It’s a bold move to constantly vary the setting and style, but as almost any one of these could have served as a centerpiece for both a film and a standard game, it pays dividends. There’s some beautiful moments and nearly the entirety of the game is simply enthralling. Besides a few odd moments here and there, the only real issue with the narrative is the ending. I experienced what you could call a “good” ending, but it didn’t feel like it quite fit tonally with the the rest of the game. While multiple endings keep the game more interesting as it increases the importance of player choices, it makes it so instead of focusing on the perfect ending for the story, the director has to instead work up to ten suitable endings in. It leads to a drop in quality that unfortunately seems impossible to avoid with this structure. That’s not to say that I didn’t enjoy the ending and it felt more rewarding than Heavy Rain’s, it’s just disappointing when the climax is breathtaking, but the ending itself feels uninspired.

Traditional “gameplay” elements are represented in Beyond with a few different features. Context actions return with a button prompt on screen during a pivotal moment, but these are far less frequent than in Heavy Rain. Also missing are the long button combinations that many remember nearly breaking their wrist over. The most buttons you’ll ever have to press in a sequence are four, but almost always it’s no more than two. Objects are interacted with on screen by moving the right stick towards them when a small white orb appears next to one. For instance, in Jody’s living quarters, she can do things like play a guitar, lie in bed, pick up various objects and more. By being so unobtrusive, this system further plays into the illusion that you’re not experiencing a video game. Instead of a series of QTEs, action scenes are controlled by moving the right control stick in a certain direction multiple times during one of the scenes. At certain points, time will slow down when Jodie is about to dodge or go on the attack, and the right stick must be quickly moved in the direction she’s moving to perform the sequence correctly. Sometimes it can be difficult to see which way she is moving, making the system a bit frustrating, but once you get into its rhythm, it becomes much more clear. 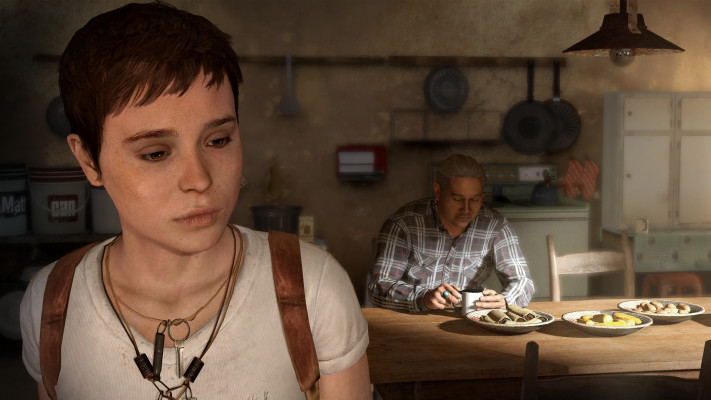 The most pronounced gameplay element is that of Aiden. At almost all times, pressing triangle summons Aiden and puts you in control. Aiden is moved around with the left stick and up or down with the R1 and R2 buttons. Aiden is used for a multitude of things throughout the game, but predominately is used to unlock doors or protect Jodie. Aiden can strangle people to death by moving the analog sticks towards each other while holding R1, or can possess them by moving the other way. When humans are possessed, they can do things like help Jodie get into secure places or kill other enemies they are with before turning the gun on themselves. Aiden can also interact with objects that have blue orbs over them, blasting them and freaking out anybody who witnesses it. One particularity funny sequence sees Aiden jealous of a gentleman caller who comes to Jodie’s apartment, (optionally) ruining their night by breaking bottles of wine or blowing out the romantic candles. The controls for Aiden aren’t quite as tight as they could have been, but it remains a novel gameplay element that is enjoyable to harness throughout.

The best part of Beyond, however, is simply the things it allows you to accomplish. There’s not many games that allow you to deliver a baby (including cutting the umbilical cord), assassinate warlords, perform Navajo rituals and throw a teenage temper tantrum all in the same package. There’s some truly inspired moments that fill you with emotion and make you empathize with Jody. It’s not packed with gameplay, but it contains enough to put you into the protagonist’s shoes, which is exactly the point of a game of this nature. 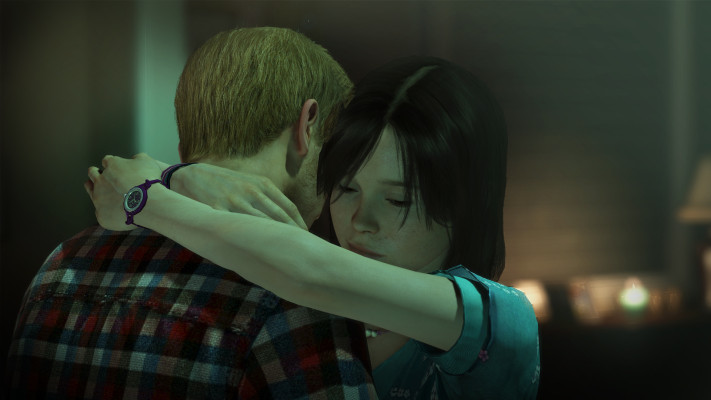 Beyond: Two Souls represents Quantic Dream’s most fully-realized work to date. The term “interactive film” is thrown around often, but this is the first game to actually feel like one. Carefully maintaining a balance between its social context and supernatural elements, the game refuses to give into standard video game tropes and remains a mature and thoughtful story throughout. It’s poignant, thrilling and even a bit frightening at times. It features less traditional gameplay elements than even Heavy Rain, which might be a turn-off for some players, but Quantic Dream should be applauded for letting these go and focusing on delivering a good story. Not every game can or should be like Beyond, but it remains a special experience that shows how powerful a device video games can be for storytelling.