Daedalic Entertainment has made a name for themselves as one of the leading modern adventure game developers, and it’s titles such as Deponia that highlight their success. Forget about annualizing a franchise, within the course of just over a year, the German-based developer has somehow released three installments into the comical series. Unfortunately, all good things must come to an end as Goodbye Deponia signals the conclusion of the short running trilogy.

Goodbye Deponia continues forth with the easy to navigate control scheme, assigning everything that’s needed to the mouse. It’s a simple and intuitive framework that establishes the core point-and-click gameplay mechanics found throughout the story. Finding items around the world and mixing them together is the key pillar to how the gameplay is structured as there are obstacles in the world Rufus needs to get past, and the only way to do so is finding rather a creative solution. This is where Goodbye Deponia shines as, while there are some questionable scenarios, for the most part the puzzles are sensibly designed. There are only two instances in the ten to twelve hour campaign that had me scratching my head, but they were confined cases that usually involved forgetting to click on a specific object. It’s one of those games where even if someone comes to an impasse, they can clearly see the flow of events following. 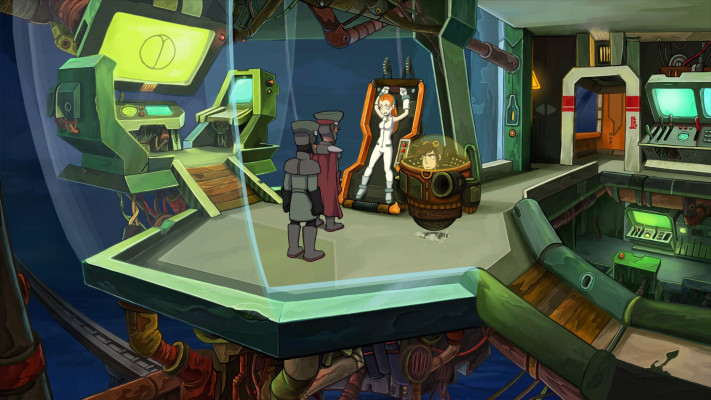 Outside the traditional point-and-click mechanics are varied isolated puzzles and mini-games that break away from the norm. These range from hitting the right notes while singing an anthem, to playing Surgeon Simulator by removing and then replacing specific pieces of the human body. The series has always had its share of unique puzzles, but Goodbye Deponia has some of the best; just the fact there’s no longer a mini-game based around rock-paper-scissors fighting controls is a blessing. It’s almost a shame that there’s an option to skip any of these as they are the highlight of the gameplay department. Outside literally one lackluster and overly simplistic design, the puzzles here are well constructed and never repeat themselves.

While puzzle constructs are a significant aspect to any adventure game, the story and characters are just as important. The cast goes all the way back to the first game, although don’t expect to see anyone who wasn’t in Chaos on Deponia, and each one has their own distinct personality that contributes to the story greatly. Rufus still sticks out like a sore thumb among the group as the self-indulged, egotistical hero we’ve come to love, but his character in general has evolved into a much deeper individual, so much so that the story cannot contain just one of him. Unlike the last game where Goal’s personality had been split into three, Rufus has found a way to clone himself and cause even more mischief. This is actually a centric story moment that contained a surprising revelation, throwing in a much deeper mystery that was secretly in the background the entire time. 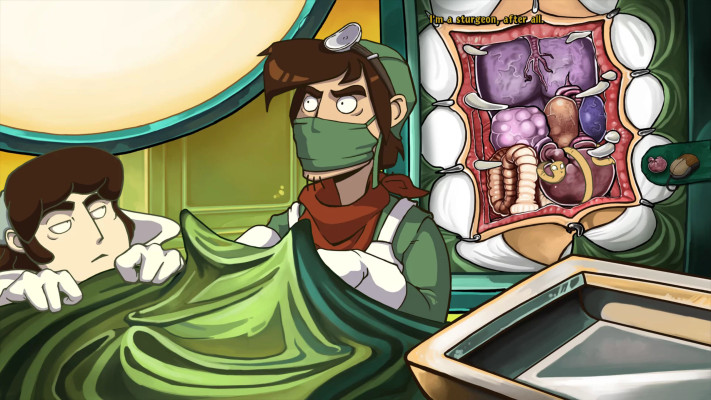 Additionally, the script for the game is surprisingly intelligent, giving even the bumbling dork Rufus a seemingly greater vocabulary than anyone would have expected. Each scenario is cleverly written and contains some humorous dialogue that should ensure for some laughs. Rufus’ comical banter between characters is not something to miss, and it certainly helps that there are a number of references to other games. This includes Donkey Kong and even mocking downloadable content ever so subtly when looking at a specific item.

While the script is something to praise, where Goodbye Deponia falls short is pacing as the story structure doesn’t always hit the right chords. Easing players in has been improved drastically as the location shortly after the initial setup is much smaller and less daunting than the giant cities the last two games introduced. Unfortunately, it’s the next two scenarios that, while well designed, feel straightforward and are merely a way to get to the overemphasized city area that’s split up in three distinct sections. This is where the bulk of the game is played in, and while I appreciate the inter-connectivity between switching on the fly between each Rufus, the rest of the game felt like an afterthought because of it.

While the story is kind of silly and goofy, it fits the bill when it comes to the visuals. It’s not something like Chains of Satinav where it’s dark and dreary; instead this is a wonderfully colored and vibrant world filled with over-exaggerated animations. It’s essentially a detailed cartoon that takes place in a world on the brink of destruction, but somehow finds the most bright color palette. It’s also something to note that the soundtrack and overall voice acting is spectacular. Whether it’s an old bum playing on his banjo, singing about Rufus’ heroic tales, or the many orchestrated tracks, the audio team and voice talent have done a sensational job. The only issue here is that there are some instances where the sound quality dips remarkably low, but only during specific lines of dialogue. 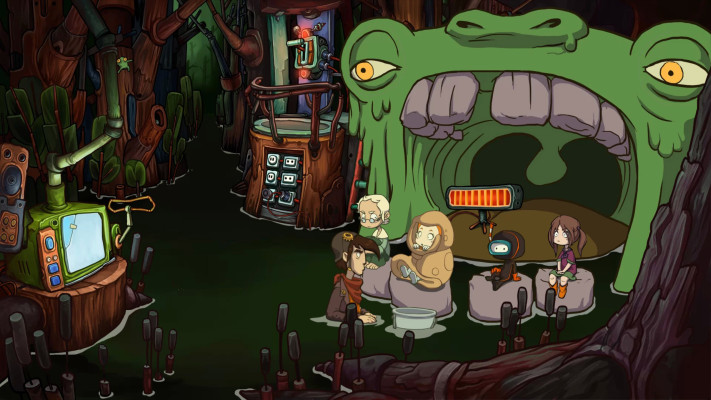 Goodbye Deponia sends off the series in the most profoundly memorable way. While there are some pacing concerns and minor technical issues here and there, these are overshadowed by the comical story and clever puzzle designs. Not only is there a greater mystery behind-the-scenes that’s established and resolved, something that was absent from past games, but the dialogue is exceptional and even more intelligently written. It may not be fault free, but Goodbye Deponia is the conclusion we have been eagerly awaiting.