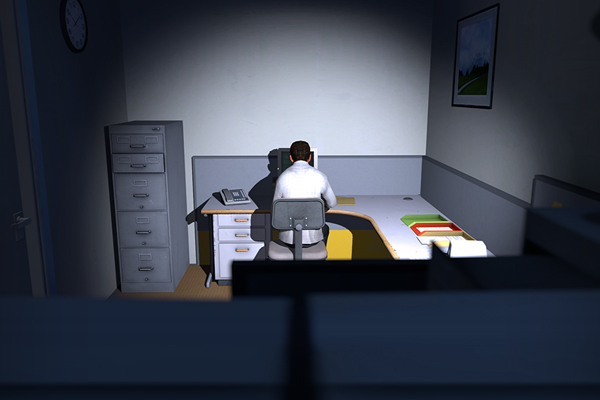 This is a review about a game featuring a man named Stanley. He worked in an office in a menial job where he did pointless busywork, until one day everyone disappeared and a narrator started dictating his every move. Sometimes Stanley worked with the narrator to move the story forward, and sometimes he went off and did whatever he pleased while the narrator got increasingly frustrated. Every ending, no matter how strange, sad, uplifting, bitter, or inexplicable led to a new beginning, where Stanley would once again set out from his office in an endless back-and-forth struggle with the narrator for some measure of control. Stanley screwed with the narrator, the narrator screwed with Stanley, and on rare occasions they’d walk the path of the story together as a team. Stanley’s life was very strange.

The Stanley Parable is a study in freedom in gaming, in which the whole point is to test the limits of the narrative to see just how big the box you’ve got to play in actually is. Like an M.C. Escher woodcut it’s constantly trying to make you understand its illusions by playing with them in near-endless new ways. While Escher wanted the viewer to understand it’s all just flat lines on paper no matter how 3D it looks, The Stanley Parable is endless choices that only appear to give the player all sorts of fun ways to make the narrative fly off the rails. 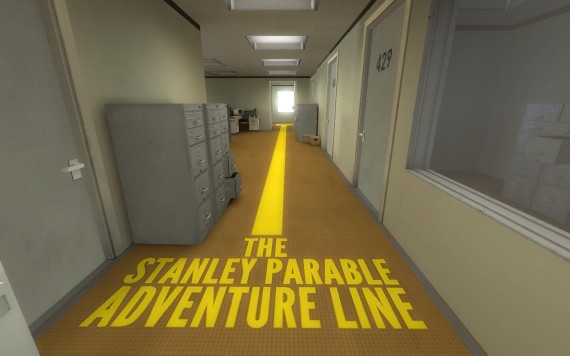 As artsy as the game may be when you think about it, The Stanley Parable still manages to be, most of all, a lot of fun to experience. There’s humor to be found from the very start as you snag the first achievement, and the game pokes fun at everything from story structure and narrative conventions to gaming tropes that are so ingrained you might not even notice them any more. The writing is smart and the narration is excellent, so much so that I usually found myself stopping any time the narrator had something to say just to make sure I didn’t miss anything. The theme of freedom as presented in a medium that only offers the illusion of freedom may sound pretentious, but the presentation is anything but that.

If there’s one problem with The Stanley Parable it’s that it’s hard to talk about without spoiling. The game is a first-person narrative with limited interactivity, so the value of the experience is in discovery and experimentation. It’s hard to be delighted about discovering the narrator got so annoyed with your screwing around that he boarded up a room so you couldn’t go in there any more if someone’s already pointed you in the right direction. There are huge, deep mysteries and hidden side-stories to pursue in The Stanley Parable, a couple of which will probably require an FAQ to figure out, but the fun of the game is following the story down all its dozens of branching paths and seeing what new situation you end up in. Discovering the narrator’s reactions as he tries to get you back on the path, gets annoyed as you don’t do what you should, gives up completely and just starts winging it, despairs, gets angry, or sometimes even kills you in frustration is also good fun, and is frequently a worthy reward for doing strange things. 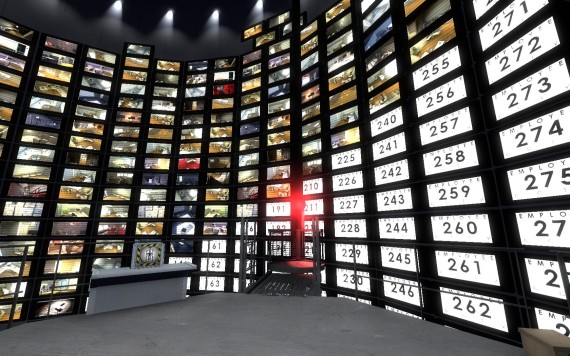 The Stanley Parable is many things all at once, and all of them are clever and fun. It’s a story made of stories, an exploration of the limits of freedom in gaming, a battle between narrator and narrated, and a giant self-referential meta feedback loop. It encourages exploration by rewarding you with entirely new game paths leading to wildly differing ends, and Stanley even manages to survive a few of them. They all end up back at the office for another journey down its hallways to a new branching point, of course, but each new journey reveals a possibility to experiment with another possible divergence. Or maybe just trying something silly like pursuing the “5 clicks on door 430” achievement. Whatever you try, the odds are good The Stanley Parable will recognize it with some type of commentary, and when the writing is this good and the world this clever, that’s a reward worth chasing.