We here at Hardcore Gamer were among the lucky ones that somehow got passed the Lumiose City saved-data-corruption fiasco that set the interwebs ablaze a few days ago. We’re not sure how we did it, as we saved at several points during our visit to the illustrious city, but nevertheless we came out unscathed. But let’s back up for one second before we go further. For the uninitiated, it was discovered earlier in the week that saving one’s progress in certain spots while visiting the second major city in the game resulted in some kind of corruption of the saved data. Ultimately, this was found to render one’s progress null and void, essentially sending folks back to the very beginning of their adventure with nothing to show for their hard work. Yeah, talk about irritating.

Because of this, players went into episodes of rage and panic, and like any good internet-wielding gamer in the year 2013, they vented their frustrations through social media and message boards alike. Fortunately, Nintendo and Game Freak’s ears were wide open and they heard the tears of sorrow and incoherent tirades that rocked the collective boat on which we Pokemon enthusiasts were so smoothly sailing. Nintendo acted quickly on this and issued a statement shortly after the initial flood of what we can only assume were death-threat laden e-mails that overloaded their inbox and servers faster than it took to capture your first Weedle or Pansage. Regrettably, though, that first response didn’t include any kind of fix, only word that they were looking into one.

Thus, here we are today, and some gamers are still encountering the game-breaking bug. So, with a few days under their belt to assess and address the situation, Nintendo has come back with a temporary fix. It’s not he most profound, but it seems to get the job done. The company reports that the current solution is to make sure folks don’t save their game while in the areas marked on the map below (the blue area). However, players can still save the game anywhere else in Lumiose City, including inside buildings such as Pokémon Centers, without fear of losing their data. Naturally, the Big N states they’re working on an application to recover lost saved game data for players to whom this has happened, though it’s unsure when this will be available.

Until then, we have a little advice of our own that seems even more full proof: don’t save in Lumiose at all! Doing so just isn’t smart, even with these mapped out “safe zones.” So save yourself the fear and heartache, and just leave town to save if you need to put the game down after arriving in the city. What sound advice, right? See, and they say we’re not nice here at Hardcore Gamer. 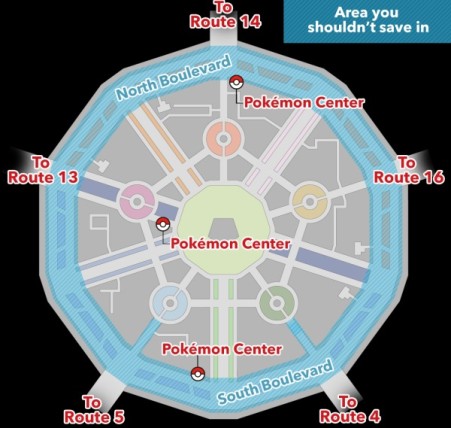