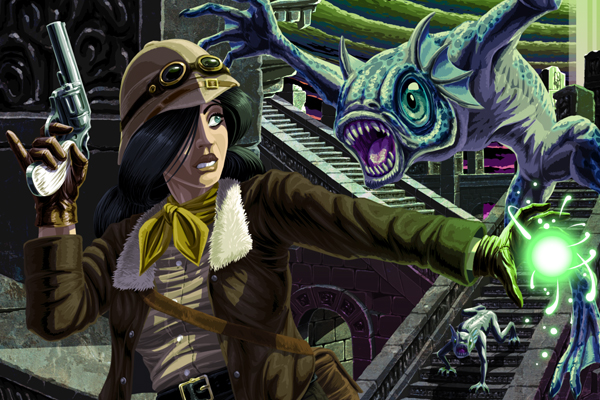 The problem with information is that it wants to be known, no matter how hard people try to keep it secret, and the more dangerous it is the less likely it is to remain hidden. Twelve herbs and spices? That’s easily locked away, and even when people reason it out the world keeps on spinning. The secret rites to summon elder gods to overrun the world? That’s going to leak out no matter how many times the ancient tomes of lore are locked away or destroyed. Then some poor librarian gets locked away to guard the books, immortal no matter how many times she should have died at the hands of the creatures guarding her means of escape. You’d think people would be happy not knowing how to tug at the frayed edge of reality, but no.

In Eldritch, you’re a librarian who’s forgotten why she’s locked away in a labyrinthine library, and death is just a minor setback. It’s a first-person stealth/action game that, somehow, manages to tease the charm out of PS1-style 3D with a blocky Minecraft look and low-poly everything else.  Starting off in the library safehouse area you quickly find three glowing books, only one of which is open at the start, and reading one whisks the librarian away to a three-level dungeon crawling with Cthulhian beasties. Getting to the end involves surviving three randomly-generated dungeons of three floors each, at which point she gets an orb and the next book opens up. Put all three orbs on the pedestals and the final area becomes available, but there’s a bit of a catch.

Eldritch is a rogue-like, and that’s not just due to the random levels. Death is semi-permanent, and while resurrection is easy it’s not free. There’s a treasure chest you can fill with money that remains untouched, and any opened books remain available, but all other progress is reset. The librarian goes back to having three health, no weapons or items, and worst of all no orbs. The only way to see the end is to do all areas in a single sitting. It doesn’t actually take very long once you get the hang of it, but that’s going to take several dozen deaths and a whole load of swearing before it happens.

The first book of levels doesn’t help prepare you for the journey, though. Like any good Level 1 enemies are relatively weak, but this means it teaches you to run around and slash everything to ribbons once you’ve found a knife. Fish-men, sorcerers, and other Old Ones all fall apart with a couple quick stabs, and if you don’t feel like getting close guns and bullets are plentiful. The atmosphere and enemies are nicely spooky in a lo-fi PS1 kind of way, but there’s no need for stealth. And then the second book of levels happens, requiring a complete re-learning of tactics. 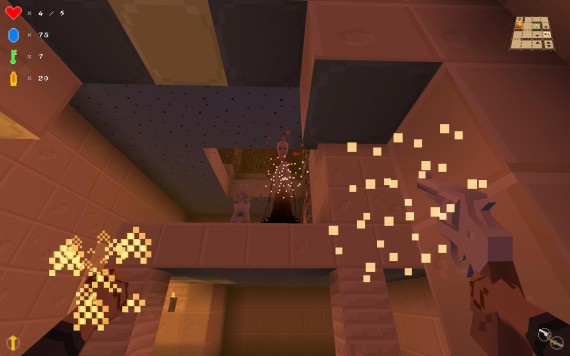 The real Eldritch is a game of careful movements and encounters. Enemies take enough hits that they’re much more likely to get a counter in if you flail away with the knife, and bullets aren’t so common that you can shoot everything that moves. Sneaking up behind enemies after leaning around the corner to scout the room, carefully tiptoeing to their back to get a good strike in, goes a long way towards guaranteeing survival. Not all enemies can be killed, though, and when they wake up after a few second they won’t be happy. Worse, running away is a bad idea because of the Weeping Angel-like statues that, once they’ve registered that they’ve noticed you with a shudder and grating sound effect, will come right for you if you turn your back. The only way to escape is to keep an eye on them while carefully backing away around a corner, hoping you don’t fall in a pit or get chewed on by an unhappy Old One. Fortunately the dungeons are made up of a random assortment of pre-built rooms, so you can get a sense of layout after a bit of experience, but carefully moving away while listening to the movements of things shuffling around the next room over, trying to nurse that last health point until you can find some food, and praying that you don’t hit a trap can make for a very tense encounter.

Oddly, Book 2 is by far the hardest section of the game. The enemies in Book 3 are tougher but the Lord Cthulhu monsters lie snoring so you can sneak by most of them, disarming traps for spare bullets to deal with the enemies you can’t avoid. Book 1’s level layouts are labyrinths, Book 2 is a bit more open, and Book 3 has holes in the floor everywhere making for easy travel. Beating all three books to open up the final area may seem just about impossible, but a bit of experience and finally figuring out that Book 1’s lack of strategy isn’t going to cut it any more turn survival into something that’s merely very difficult. By the time you’ve opened up the last area, you should have the skills necessary to survive it without too much problem. 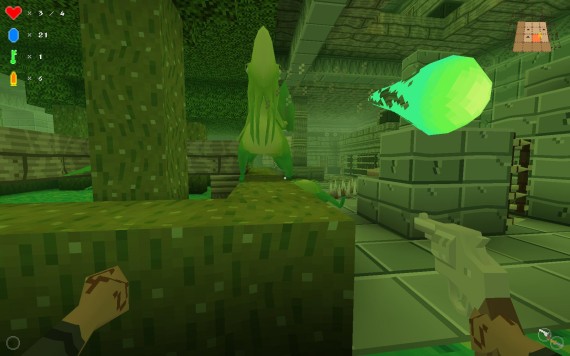 Eldritch‘s random nature makes every journey into its dungeons a new adventure. There are multiple types of equipment to find, a variety of spells that might show up, several kinds of weapons (of which you can only carry two at a time), and it’s all set in a dungeon that’s new every time you venture down. Enemies are smart enough that there are a number of strategies for playing with them, and it’s always fun to trick them into attacking each other. Death is a problem that experience minimizes, and Eldritch is always different enough that gaining that experience never feels like a chore. It’s always fun to dive back into the books, exploring their levels, hoping to find the best loot drops and making do with what you actually get. Eldritch is brutally tough until you learn it, and then settles down to be pleasantly challenging. It’s a big random first-person dungeon crawl dripping with atmosphere, evil and fun in equal measure, and as a bonus you get to be a librarian reigning in the power of dark tomes of terrible knowledge.