Comic book games haven’t always matched the level of quality that you see in the latest Batman games. In fact, finding a good comic based game on a console in the old days was like finding a needle in a haystack.  So you can imagine my surprise when I first powered on my SNES with Spider-Man and Venom: Maximum Carnage inserted into it. Often referred to as simply Maximum Carnage, this game is very fun and challenging as it lets you step into the shoes of your favorite web slinger and his arch nemesis Venom as they try and stop Carnage, the redder and far more psychotic version of the Venom symbiote.

Developed by Software Creations, and published by LJN, the gameplay in Maximum Carnage is classic beat em up with a little extra spideyness thrown in.  Not only do you walk around the streets of New York and other locations, but can also cling to walls, swing on your web, shot out a web Scorpion style and bring the enemy to you, and shoot wads of webbing to wrap up would be attackers.  That may sound gimmicky, but it can actually be useful to avoid being surrounded or keep the AI from gaining the upper hand and to collect hidden extra lives (which you will need) and health and it is implemented well. 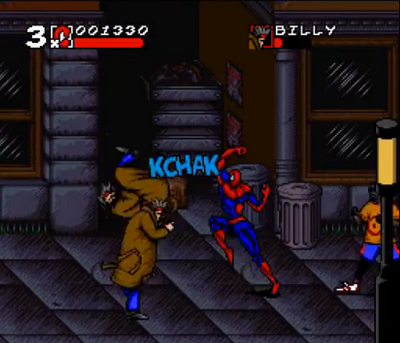 The action is well-paced and there is an interesting combo mechanic built in that after so many hits a super hit becomes available (indicated by a flashing health bar) that lets you deal extra damage or clear yourself out of a sticky situation. The game doesn’t look great visually by any means, but the art style actually fits the comic book theme well. The enemies may be a bit on the generic side, but really these are usually just generic bad guys anyways, they could have received a bit more attention, but they fit the overall art style and are good enough to get the job done. The combo animations are pretty good and have nice feel to them, and are very satisfying to pull off. Especially with the particularly annoying enemies, smacking them down to the ground with the final part of a combo just feels good in this game.

The story is about Carnage seeking revenge on Spider-man and Venom and is told with comic book style story boards. You are given the choice to select either Spider-Man or Venom after playing through an initial set of levels. Both largely play the same, but have slight variants on the same story. There is also a good cast of supporting characters, including Black Cat, Iron Fist and Captain America, that you can call by collecting their icons that are scattered about in the stages. These can be a life saver, as they will either clear the screen of enemies or deal good damage to a boss, which you will want considering the difficulty of the bosses. 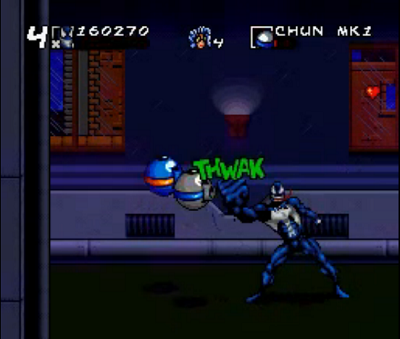 Perhaps the biggest highlight outside of the fact that you get to control either Venom or Spider-man in a well balanced beat em up is the music that you do it too. The soundtrack is quite simply, really damn good. It comes from the band Green Jelly who recorded tracks for the game which were then recreated for the SNES from those recordings.  It fits perfectly with the on screen action, and is just good music even outside of the game. Seriously, if this game deserves to be remembered for anything, it’s the soundtrack. It can be repetitive, but it doesn’t matter, it’s that good.

Maximum Carnage is far from the holy grail of beat em ups. The graphics are so so and the story isn’t great with comic book style cut scenes that have an awkward speech bubble layout. What the game does right, however, makes up for it and renders it a seriously fun and must play game for any SNES or Genesis owner. The soundtrack is fantastic and the gameplay is solid, with enough spidey and venom powers thrown in to stand out from the crowd and offer fans of the genre a reason to check it out.