The original Magicka was a cooperative action/RPG in which players stepped into the curly-toed shoes of wizards who could magically blend elemental powers. Humorously enough, said game about element-mixing wizards received an expansion-pack that was set during the Vietnam War. For some reason, though, the game never really caught my eye. After looking at screenshots back when it first released, I recall foolishly shrugging it off as just being a Diablo-like. After playing a hefty amount of Magicka: Wizard Wars, however, I’m sold on the franchise.

Unlike its predecessor, Wizard Wars is strictly an online player vs player game. Looking at screenshots, it wouldn’t be odd to deduce that it’s just another branded MOBA to throw onto the pile. But it really isn’t a MOBA at all — it’s a thing of its own. During a match, two teams of four wizards spawn on either side of the map, and are tasked with capturing bases (each of which act as a spawn-point).  In the only map that is currently available, the bases are plotted in a triangular fashion.  The wizards then fight over the bases in a Battlfield-like tug-of-war for land control. Also similar to Battlefield is the way each team starts with a certain number of tickets. Each ticket represents a “reinforcement” (life) that players spend each time they respawn. When one team holds more bases than their enemy, the enemy begins to lose a ticket or two every few seconds. The mode works better than I had ever thought it would within a DOTA-like environment. The setting, and mode successfully host lengthy, strategic, and intense skirmishes. 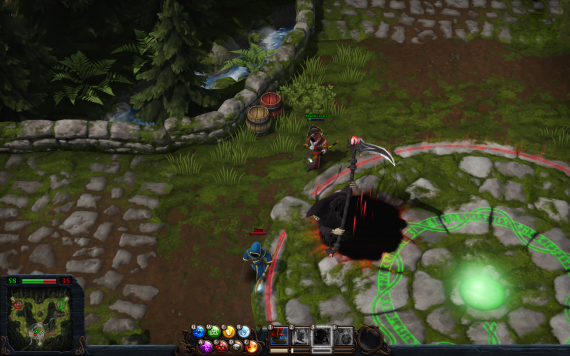 The main hook of the game, though, is its unique take on spell-casting. Each player has a pool of eight different elements including Water, Fire, Life, Lightning, etc. Most all of these elements can be mixed into different and unique spells. For instance, mixing Frost and Water will allow you to shoot icicles at your target, whereas mixing Water and Fire will send a blast of steam their way. Spells used independently can also increase each other’s effectiveness; an example of that would be spraying water on an enemy and then using Frost to quickly freeze them. You can also cast any spell on yourself, so if you’re set on fire you can use a Water spell to quickly douse your flame. You can mix up to three elements at a time, but some aren’t compatible with each other. Luckily, adding the same element to a recipe twice will make it’s effect even more powerful. Each element is assigned to a keyboard hotkey, so spell-creating can easily be done on the fly. Once understood, the system proves to be thoroughly entertaining, as it provides an incredibly amount of combinations. To add to the chaos, friendly-fire is fully-enabled in every match.

Separate from the regular spells are Magicka abilities. These high-powered attacks/moves are powered by mana which you receive for dealing damage to enemies, and capturing control points. I assume these will be editable in the final version of the game, similar to Modern Warfare 2’s Killstreaks, but while in early-access, the Magicka abilities have been rotated with each Patch released. Some of them have been heavy damage-dealing abilities like “Tactical Dragon Strike”, while others allow you to zip around the map quickly, or revive fallen teammates.

The primary issue with the game in its current state, though, is that it really doesn’t provide any hand-holding for players who are new to the franchise’s combat system. As soon as you log in for the first time, you’re booted into a quick tutorial, and then the game automatically throws you into the fray of a genuine online match. This will no-doubt be discouraging for some, as playing horribly in a team-based game never feels good. It’s also unfortunate that the game currently provides no form of bot-matches for players who wish to hone their skills. And there’s also no way to re-enter the initial tutorial environment that momentarily allows for experimentation. Another oddity is that when playing online with friends, you have to re-invite everyone to your party once a match is finished. All that said, the game isn’t set to release any time soon, there’s more than enough time for the addition of these few helpful features. 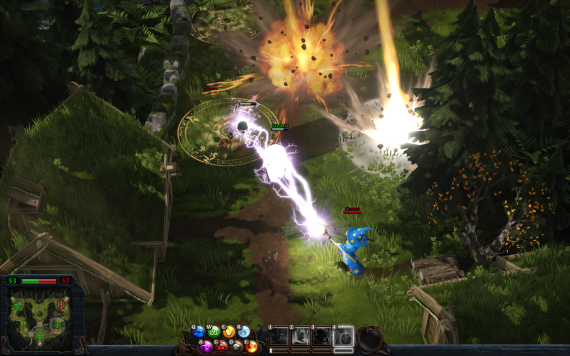 Magicka: Wizard Wars is looking fantastic. While it’s impossible to know how the game will be once all of its features are announced and enabled, quite frankly, I’m already hooked. You can buy-into the alpha right now through Steam Early-Access, but the game is set to be free-to-play upon full release. As many know, with in-game items that can be bought with real money,  the free-to-play space can be a messy one for competitive games. Luckily, succeeding in Wizard Wars seems heavily dependent on skill rather than gear superiority, so hopefully there’s not much to worry about.

The pre-alpha can be bought into now, but Magicka: Wizard Wars’ actual release-date has yet to be announced.