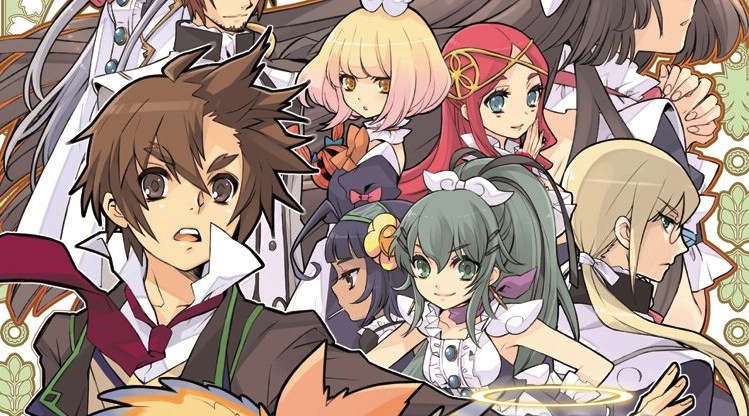 The Guided Fate Paradox is that RPG you never knew you wanted. While so many roleplaying games in this day and age are clamoring for ways to innovate, NIS America and developer Nippon Ichi’s newest family addition sticks to the tried and true conventions of the roguelike sub-genre of RPGs. Perhaps that last sentence has scared you off, but it really shouldn’t: this is not only one of the more accessible games of its niche-kind, but it’s also one of the more enjoyable. The Guided Fate Paradox is a game that has some trappings, but what it does, it does well and with meticulous precision. It’s time to find out why.

The Guided Fate Paradox explores the adventures of one Renya Kagurazaka, a recently assumed god who only “earned” the lofty title after winning a lottery at a local shopping center. Upon his unexpected victory, an angel comes to his side and escorts him to Celestia, a heavenly place bustling with activities of the most pious kind. It’s here that Renya is told how the concept of fate works, and is further informed of his role as it pertains to the grand idea. During this explanation, it is detailed that his duty as God is to help humans’ prayers come true. But fulfilling these dreams isn’t strictly limited to mortal species — Renya must also take care of all beings in the universe, be that aliens or fairy tale heroines.

With such a huge burden to bear, Kagurazaka is provided something to make his duties a bit easier to uphold: the Fate Revolution Circuit is a divine machine that essentially mimics reality and allows its user to enter the simulated state of existence. Having such a device at the ready ultimately means our good hero can carry out his prayer-granting responsibilities in this augmented reality that in turn affects the real world. Naturally, a god’s work is never without strife, and thus the forces of evil lurk around every turn, spitting in the face of Renya whenever they can in an effort to crush him and all the righteousness he stands for. Naturally, such wickedness manifests into something more than just a random encounter with a few baddies, and as a result, a narrative that has much more at stake presents itself over time.

So… that’s absurd, right? Yes, let’s agree on it: that’s absurd. But it’s in Guided Fate Paradox’s outlandish premise that literary brilliance unfolds at a subtle, but wonderful pace. Characters are a handcrafted adjoining of over-the-top wackiness and deeply metaphorical vessels that make the tale one that actually presents folks with a surprising amount of duality, giving us zany fun along with moral and social commentary that is simultaneously ironic and poignant, hilarious and thought-provoking. To capture such profundity, while making things superficially appear merely comedic is a feat in and of itself — something that truly speaks to the level of complexity that riddles Guided Fate below its seemingly shallow surface. The colorful localization and script never hinder the flow of the story either. In fact, the dialogue is consistently witty, clever beyond what one might expect, and yet it knows how to reel things in to deliver moments that are weighted in a kind of impactful sincerity. While there are no choices for the player to make that influence the direction of the plot, this linearity simply equates to a tighter, more focused narrative. Some will scoff at the lack of freedom and overall narrative restrictions, but having a coherent story is ultimately more important for a Japanese roleplaying game than making decisions.

But it’s not just the thematic undertones that make NIS America’s newest RPG a deep, rewardingly intricate roleplaying experience. At the core of its gameplay, Guided Fate is what would happen if Disgaea had a lovechild with Izuna, or Shiren the Wanderer, or any roguelike for that matter. So that essentially means it’s an SRPG roguelike with layers upon layers of customization and combat. Because of what it is, every interested gamer should know that this is a loot-crawl above all else. Meaning to say, killing stuff is the bulk of Fate‘s gameplay. With slaying foe after foe in randomly generated dungeons comes the prospect of uncovering equipment, items and all sorts of goodies just ready to be pinched and subsequently equipped.

Most importantly in all of this slicing and dicing are earning levels. For newbies of the genre, this may come as a surprise, but for each level that is acquired in the Fate Revolution Circuit, it does not carry over to the next dungeon. So once players have left a labyrinth, they lose all of those hard-earned levels. The good news, however, is that stat upgrades are permanent and remain throughout the course of the adventure. Also on the good-news front is the fact that weapons and equipment gain experience themselves the more they are utilized. Once a piece of gear has reached its max level, it then grants folks an attribute tile that can then be pinned onto a stat-boosting board associated with the character in-question. But the customization keeps on going; relics can be further be attached to Renya to increase various traits, making him even more of a powerhouse.

The tactical ins and outs don’t end there, though. The actual combat employs several strategies that must be fully grasped if players expect to make it through the insanely difficult dungeons. Clearly, any good fight isn’t complete without a weapon or two. Fortunately, there are plenty of armaments in The Guided Fate Paradox, and it’s up to the player to decide which one they will brandish. Arms are broken down into three classifications: close-combat, ranged and magic-based. Pieces of gear equipped in conjunction with a weapon can further enhance its attack, as each possess unique effects. Adding to it, there are special abilities to consider, which are exclusive to the weapon being wielded. To make matters even more full-bodied is the bonus special attack available depending on the gear used in tandem with the equipped weaponry. Moreover, there’s the opportunity to evolve into a sort of mega-form of Renya after filling a particular gauge to tank those harder hitting opponents and inflict crazy amounts of damage. Naturally, there are items to use, along with objects and people to pick up and hurl across the stage ala Disgaea/Phantom Brave. It’s not just the protagonist who players get to deck out with gear; in each dungeon, players take one companion with them. So managing their equipment and issuing specific attack orders is integral to victory. Needless to say, there’s just a lot to consider when delving a dungeon in Guided Fate, and the truth is, the experience is better for it. 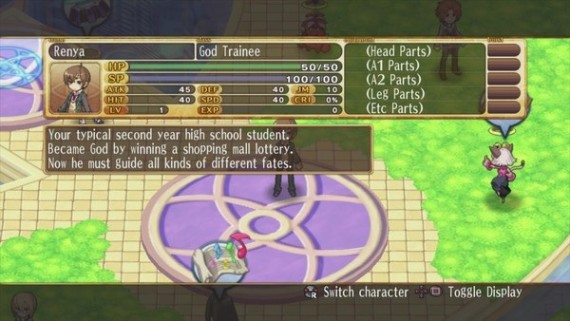 For those who it may have missed the point, the level of characterization here is multifaceted and nuanced. The systems in place require some getting used to in order to fully take advantage of all that’s offered, no doubt, but once all of the facets are understood, it’s a solid set of components that make for one hell of a deep process. These game-isms aren’t presented to the player all at once, thankfully, which does wonder in terms of not overwhelming. Instead, they’re introduced slowly over the course of the initial hours of the adventure, making sure that players can easily remember and use each tactic without much forethought.

As mentioned, The Guided Fate Paradox is a hard game. A very hard game. It’s punishing, actually. Better yet, it’s tear-inducing. It will break you, as a man. It will chew you up and spit you out. In other words, it’s tough as nails. We’re not talking Dark Souls difficult, but we are talking controller-tossingly difficult. It’s more than just difficult enemies. Sure, those are a plenty, but it’s the consequences of death that are most crushing here. Dying in a dungeon sends players back to town, completely undressed of their equipment, weapons and items. So not only are folks essentially returned to Celestia naked, but then their money-sack is cut by fifty percent, and any levels earned are transformed into base-stat increases. To make up for this, players are given helpful items if death becomes the only constant, but the truth is, this hardly makes up for the frustration and since of loss that accompanies a character’s swift end. That being said, this is a roguelike; and, as any veteran will know, they’re meant to be cut-throat — the type of game that seems specifically designed to make one hate their life. Meaning to say, enter at your own risk. 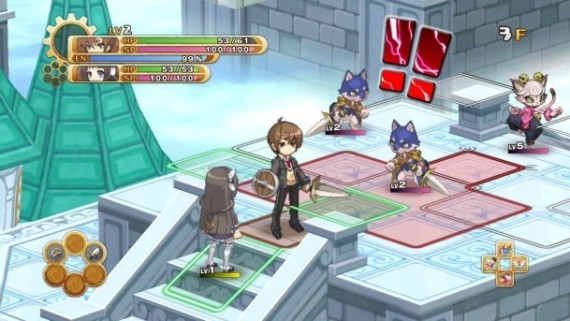 If the punishing difficulty isn’t enough to deter interested parties, then perhaps the rather slow start will. The initial hours of Guided Fate Paradox are laden with tons of text, a seemingly never-ending series of tutorials and a surprising amount of characterization. Only when the developers finally decide to let the story unfold organically and give players the keys to the kingdom without any kind of restrictive parameters does the title hit its stride. Once this happens, it’s smooth sailing, but that first 60 to 90 minutes is especially daunting.

On two occasions have we compared Guided Fate Paradox to its kindred soul, Disgaea. We didn’t mean that just in terms of gameplay mechanics. While the two share parallels in fundamental design, their aesthetic qualities are strikingly similar too. Hopefully it didn’t elude folks, but this is a 2D RPG. It makes use of an isometric view that actually complements the dungeon crawling quite well. Regrettably, it presents some control issues as a consequence, making getting used to navigating the game’s grid-based map a slow process. Nevertheless, while 2D, the sprites are delightful. They’re big, expressive and utterly adorable; better still are the actual visual changes to a character when they equip a piece of gear.

Backgrounds and dungeons are equally varied and filled with personality. The anime cutscenes of course are beautiful to boot. It should be noted, however, that some of the graphics do look decidedly low-res, so be advised. The interface at least is clean, making steering the game’s many menus a breeze. The soundtrack also fares well, with plenty of tunes that are bubbly and bouncy, with numerous others that elicit adrenaline and heart-thumps. It can come off as unremarkable at times, and even forgettable at worst, but when it understands the situation it’s trying to accentuate with a kind of aural intensity, it escalates the experience. Oh, and did we mentioned that most of the game is fully voice-acted with solid actor performances all around? Well if we didn’t, take note of that, as well.

The Guided Fate Paradox is a niche game, but that shouldn’t scare off anyone who has a taste for Japanese RPGs. Its story does a balancing act of providing lighthearted fun and philosophical poignancy, while its gameplay is perhaps one of the deepest endeavors on the PS3 right now. Yes, it’s a punishingly difficult dungeon crawler, but one that is never unfair or asking too much of those players willing to learn its bevvy of systems and dedicate the time needed to perfect them. The reward in Guided Fate Paradox comes from understanding its multitude of gameplay layers, as only then will folks comprehend the brilliance that shines even brighter than the candy-colored aesthetic and zany characters themselves. Don’t let anyone tell you otherwise; this is one of NIS America’s most complete and sound offerings, and one that should not be missed by anyone who enjoys the genre.