As the holiday season draws near, Nintendo is in for quite the fight as it contends with the soon to be released PlayStation 4 and Xbox One following closely behind. Nintendo will be fighting for shelf space and visibility with two very highly hyped new kids on the block, and has to offer potential customers enough incentive to either chose their console over the other offerings, or prove to be enough of a value to be purchase in conjunction with the other more expensive competition.

Unfortunately for Nintendo, releasing their console out of step with the other big two contenders didn’t do the Wii U as many favors as they were likely hoping it would. Iwata, while deftly handling questions from investors after it was rather apparent that the sales numbers for the Wii U had slowed, addressed their strategy going forward saying that doubling down on their strong IPs while doing their best to foster good will with third party developers.  As the Wii U has been slowly trotting along, it was fairly obvious that Nintendo needed to do something to pump new life into its gamepad-centric console, especially in the face of very high profile releases from competitors.  Dropping the price of the hardware seems to have helped a bit, but with less graphical firepower then its future competition Nintendo knew it needed to do more in order to appeal to the value seeker in all consumers.  Nintendo’s strategy? Bundles.

Breaking away from merely bundling Nintendo Land with its consoles, Nintendo introduced the Wind Waker bundle. With sales of the Wind Waker not really making the splash that Nintendo thought it would, they doubled down and recently announced that they would be bundling New Super Mario Bros U and New Super Luigi U rather than the standard Nintendo Land that came bundled with the deluxe sets of the Wii U. This news alone would certainly show that Nintendo understands the situation that it is in, and by pasting the two most recognizable plumbers on the planet on the front of their box shows that Nintendo certainly isn’t going down without a fight. But that isn’t the only news to come out regarding the Wii U and its bundletastic future.

Tripling down on the bundle strategy, Nintendo has recently announced that it will be bundling Skylanders Swap Force with basic level (8gb) Wii U units.  While some may scoff at this announcement, and respond with general mockery, taking a look at the data shows that this is a brilliant decision. Firstly Skylanders has proven to be successful enough as a franchise to inspire Disney to follow suit with its own figurine based game. It’s no doubt that Nintendo has angled their console to be the cheaper family friendly console, but when taking a look at the Skylanders sales data you can see that the franchise owes much of its success to Nintendo consoles with the name Wii in them. 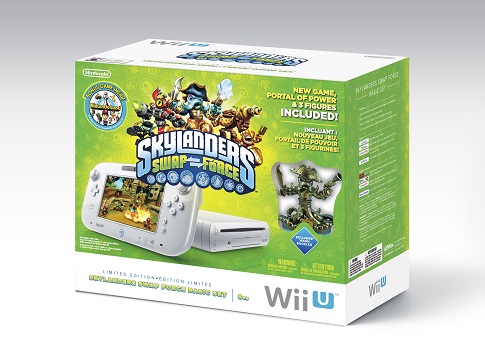 This is sure to grab many parents attention, who when looking to conserve as much money as possible during the season notorious for milking the most money out of consumers. This bundle gives the perfect incentive for hesitant parents that were happy with just having little Billy play on the Wii to upgrade to the Wii U. The packaging is also brilliant with bright colorful graphics that are sure to catch the eye of young shoppers, and will inevitably lead to many kids giving the puppy dog eyes to parents as they peruse the stores shopping for deals on holiday gifts.

With the brilliant pairings of Mario, and Skylanders bundled in tight with the Wii U, Nintendo is showing that it’s not just going to lay down and passively let this holiday season pass. They most likely recognize that this is its final chance to give its base install numbers a good boost lest they get completely left in the dust this winter.  How much these bundles will push up sales obviously remains to be seen, but this is a very good step in the right direction for Nintendo in remaining relevant while two of the big three finally throw their opening punches in the latest generation of gaming.