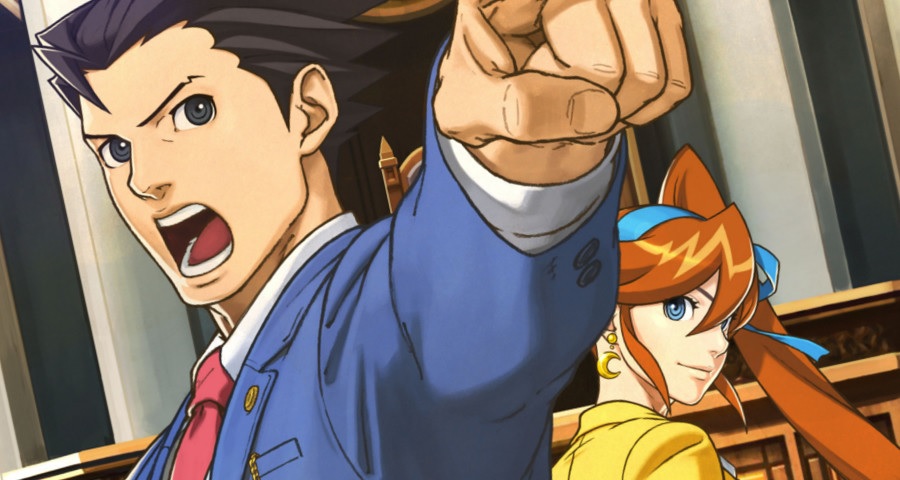 The first thing players will notice when they jump into Phoenix Wright: Ace Attorney — Dual Destinies is that not much has changed in the series since its last installment. Sure, there have been some enhancements to the formula, but by the by, this feels like a Phoenix Wright game if there ever was one. Even still, this is one of Capcom’s most promising franchises, and one that has been consistently solid through the years. With that in mind, some will nevertheless bock at the unchanged principles residing at the game’s very core, but for most, we have to ask ourselves a pivotal question: is more of the same really such a bad thing, if what we’re getting has been strong since the very beginning? It’s time to find out.

Dual Destinies starts off heavy and with a statement: a recent bombing at the local courthouse has left the judicial system and those who uphold the law shaken and battered. In the aftermath of the carnage, it’s up to returning characters Apollo Justice and the man of legend, Phoenix Wright, along with rookie defense attorney Athena Cykes to clear the name of a close friend and seemingly innocent girl of the charges being pressed against her — which say she is in fact the culprit of the fatal explosion. For the sake of avoiding spoilers, we won’t go any further, however, we can say that this turn of events merely sets the stage for an intriguing and exciting story. There’s a slew of narrative crescendos and twists to be expected in Dual Destinies, giving way to some of the best courtroom duels, melodrama and investigations the series has seen.

Perhaps what’s most impressive about Destinies‘ tale, though, is how it brings to light some of the shortcomings and misgivings of our current legal system. Outside of the typical outrageous antics from the story’s primary players, and the absurd courtroom conduct at large, the message beneath the chaos is one of profound seriousness. The themes may be covered up by wild scenarios, but they nonetheless are revealing of a rather somber point. Through this type of social and legal commentary, this latest installment’s narrative actually feels the darkest, heaviest and most important of the bunch. Thankfully, the game does not absolutely require a playthrough of the previous ones to understand what’s going on, so newcomers can jump right into the thick of it without feeling as if they’ve missed out on critical story bits.

It’s entirely possible that what really delivers those high spots in the story is the spot-on localization. The star attraction here, though, is the stellar cast of oddballs, who range from adorable and quirky to downright outlandish. Regardless of the level of neuroses found in the many personalities sprinkled throughout the game’s five cases, each possess unique backgrounds and histories that are explored with a surprising amount depth. Compounding that depth, is the degree of clarity we are given as to the individual character’s motives and internal conflicts. In this, even the most out-played troupe is presented in a favorable light, further enhancing the player’s attachment to the character at hand. Undoubtedly, however, the cast members won’t win over every gamer. In actuality, because of how they are designed and ultimately present themselves, folks are probably going to either love the characters or find them intolerantly obnoxious. Whether if it’s the lawyer who repeatedly makes death threats smack-dab in the middle of the courtroom — in front of an entire audience including the magistrate — or the defendant who sniffs sunflowers to cope with her anxiety, or the overly clumsy and positive newbie attorney, the extremely varied personalities will polarize audiences. 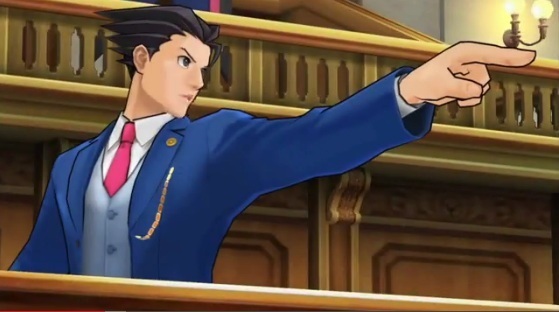 It should be known, though, that the title “Phoenix Wright: Ace Attorney” is an extreme misnomer in the case of Destinies, as the beloved Wright himself is a tertiary character at best, and hardly-present at worst. So make no mistake about it, this is definitely the tale of Athena Cykes — the character players will assume for most of the adventure. Fortunately, Athena is an extremely likable character, for the most part, and is just downright endearing in her naivety. But she doesn’t stay like this; she actually evolves throughout the cases, taking players along for the ride on her journey of self-exploration and enlightenment. Athena isn’t the sole contributor to the game’s tale, however; returning character Apollo Justice plays a sizable role in the adventure, and goes through a series of hills and valleys himself.

By playing as both of these characters, folks quickly learn of each’s unique ability that assists them in winning cases. Athena can essentially “hear” people’s emotions, allowing her to hone in on when someone’s feelings aren’t where they should be, while Apollo utilizes a bracelet of special power that helps him know when someone is lying. So for example: Apollo can scan someone to see if they’re lying; thus, small indicators such as body language or behavioral patterns come into play here, and are what allows Apollo to spot truth or deceit. On the other hand, Athena can make use of the pendant around her neck, named Widget, to perform a quick psychotherapy session, to better conceptualize a person’s emotions, as they testify, taking note of anything seemingly out of the ordinary with their feelings. Both of these talents create unique chances for cross examining and interrogating witnesses who would otherwise be impossible to crack, ultimately keeping the courtroom antics diverse and engaging. 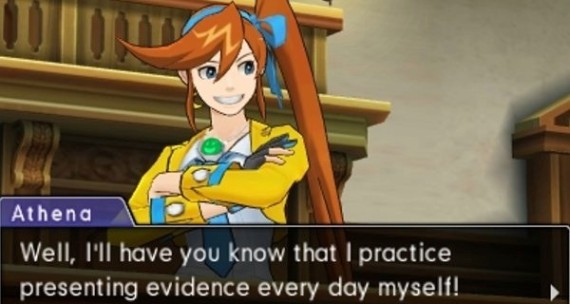 So while the story generally shines — and keeps the predictability to a minimum — that leaves us with the gameplay to evaluate. As mentioned, Phoenix Wright has always been one part visual novel and one part point-and-click adventure game. Dual Destinies plays it safe by opting not stray from that recipe whatsoever. Just as one might expect, playing an attorney puts players in the role of getting to the bottom of a case. This process typically includes the following: investigating scenes, talking with witnesses and suspects, presenting evidence in court and then examining people on the stand, all the while trying to dethrone the opposing lawyer.

First though, players need a client, which is conveniently given to them for each case. From there, they will need to do some investigating just to get a feel for the scenario. Endless searching of crime scenes and the suspects at large is of paramount importance during these situations. Unfortunately, though, like the previous games, Dual Destinies pulls players along by their wrists and forces them to meet every single criteria before presenting the evidence in a courtroom, effectively taking out the need to ever make clever conclusions or use logic on their own. What this means is that nearly all evidence that’s needed for a successful showdown in court is given to the player, with characters making sure to give them more than enough to solve the case. Of course, it’s never told to players how to use the evidence, or which pieces are integral to a proper defense, which is where the power of personal choice gets reintegrated into the mix. 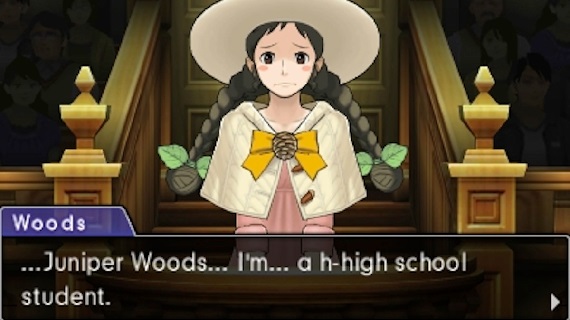 Though, don’t be fooled: the power to royally screw up a case is not entirely given to us. In fact, it’s almost impossible to fail a defense. While it’s technically possible, usually presenting the wrong piece of evidence, or choosing the incorrect statement while examining a client on the stand, only leads to a small bit of dialogue that tells the player of their inaccurate choice, but then opens it up for them to take another stab at it… and another… and another. In essence, it’s really difficult to not succeed during each courtroom duel, since so many chances are given to the player to ensure they find victory. Some will undoubtedly be disappointed in the overall inherent lack of challenge found in Dual Destinies because of this, but the truth is, Phoenix Wright has never been a franchise known for a daunting degree of difficulty. These games are about experiencing the grandiose stories being told, they’re not wars of attrition.

Perhaps the two biggest gripes with the game, however, are how slowly it begins, and how there’s been no radical shake-ups in the formula. The narrative introduces a lot of different players up front, and because of this, it takes a while to get off the ground. Of course, once it does get rolling, it’s an rewarding and captivating endeavor. At the same time, returning players will notice that this still is a Phoenix Wright game. Everything we’ve been doing as defense attorneys for almost the past ten years is still present, eliciting a sort of been-there-done-that feeling.

Where the game has changed things up a bit, though, is in the presentation. Making the jump to the 3DS means that the game looks better than ever before. This is seen in the new 3D character models specifically; instead of characters appearing as mere portraits, as seen in the previous titles, they are now rendered in full 3D and look great against their static, 2D backdrops. This is particularly true when the system’s 3D feature is cranked all the way up. Yes, that means this might be the only game you actually play with the slider in the upright position — at least for a while. The soundtrack is also solid, knowing how to set the tone of a scene with a mere composition. In fact, the music here is eclectic, making sure it has a sound for each occasion. Stoic, triumphant themes ring out during the big moments of the story, and solemn ones play on our heart strings during the more touching scenes. This all makes Dual Destinies one of the best soundtracks of the bunch. 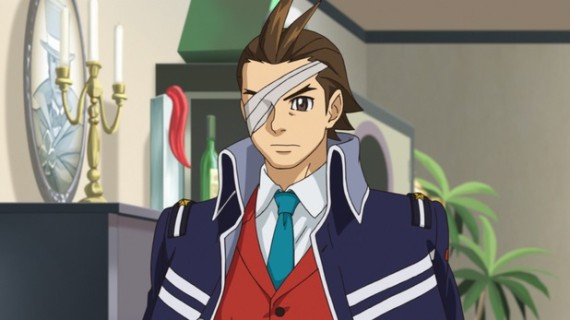 Phoenix Wright: Ace Attorney — Dual Destinies is a success. Yes, it feels like more of the same, but for a series that has yet to put out a bad title, that shouldn’t be viewed negatively. The writing and dialogue is extremely intelligent and razor-sharp. Moreover, the characters are infinitely entertaining, giving players one of the franchise’s strongest casts to date. Sure, the gameplay itself isn’t overtly challenging, and at times the developers hold your hand too much to make certain you succeed in the courtroom, but in doing this, the game never feels nerve-racking or frustrating. It allows us to sit back, do some investigating and simply enjoy the tale being told. Dual Destinies pays homage to the installments before it, giving longtime fans something to look forward to, yet is also possibly the best entry point for newcomers to the series. Appeasing both audiences is not easy, but Capcom has done it here — that’s an accomplishment in and of itself.