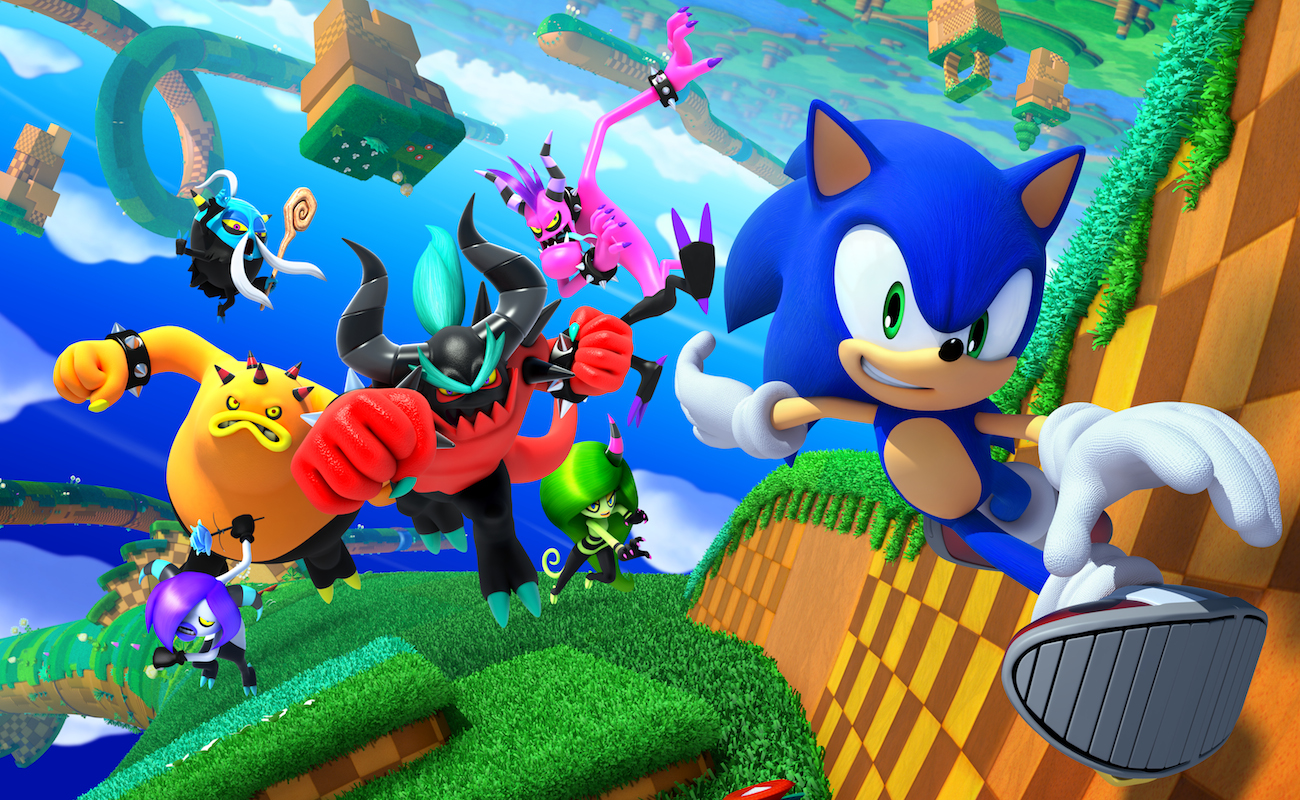 After a well deserved two year break after his successful 20th birthday, our favorite blue hedgehog is back sporting new moves, levels, enemies and challenges in Sonic Lost World, the first of Sega’s three exclusive titles of the Blue Blur for the Wii U. So hike up your sneakers, grab yourself a chili dog and get ready to roll.

The first thing out of the gate you’ll notice is that Sonic Lost World slows down Sonic’s trademark speed. allowing him to focus more on the platforming that hasn’t been given as much limelight compared to the boost speed gameplay brought on by Sonic Unleashed (or technically Sonic Rush). Sonic is set at a default speed of a brisk walk, but he’ll crank up the speed when the ZR button is held. His trusty Spin Dash is also present, though it can make Sonic harder to control, especially with maneuvering small platforms and thin ground. Despite this, the flexibility of choosing the pace depending on the surrounding feels natural. Controlling Sonic feels right; he doesn’t feel loose as in previous installments, either due to terrible bugs and controls or because of going too fast to keep up. His modest pace of speed helps with maneuvering around the levels and you’ll be having plenty of fun when you’re going at a good speed.

Sonic’s parkour moves work for the most part. Wall running and jumping is fluid and you’d be hard pressed to find it difficult switching walls on the fly, feeling like a blue ninja gracefully traversing new areas. Along with wall running Sonic’s new repertoire of moves includes the ability to perform flying kicks, which can used to knock other enemies into each other. Sonic’s patented homing attack is back with an upgrade, allowing chain homing attacks when multiple enemies are locked on. It can also be used to traverse certain areas and in a one two punch combo with the flying kick. Sonic’s double jump makes a return, and can help making gaps where a single jump isn’t enough, but sometimes if your speed isn’t right the double jump can have Sonic stopping in mid jump and falling to his death. 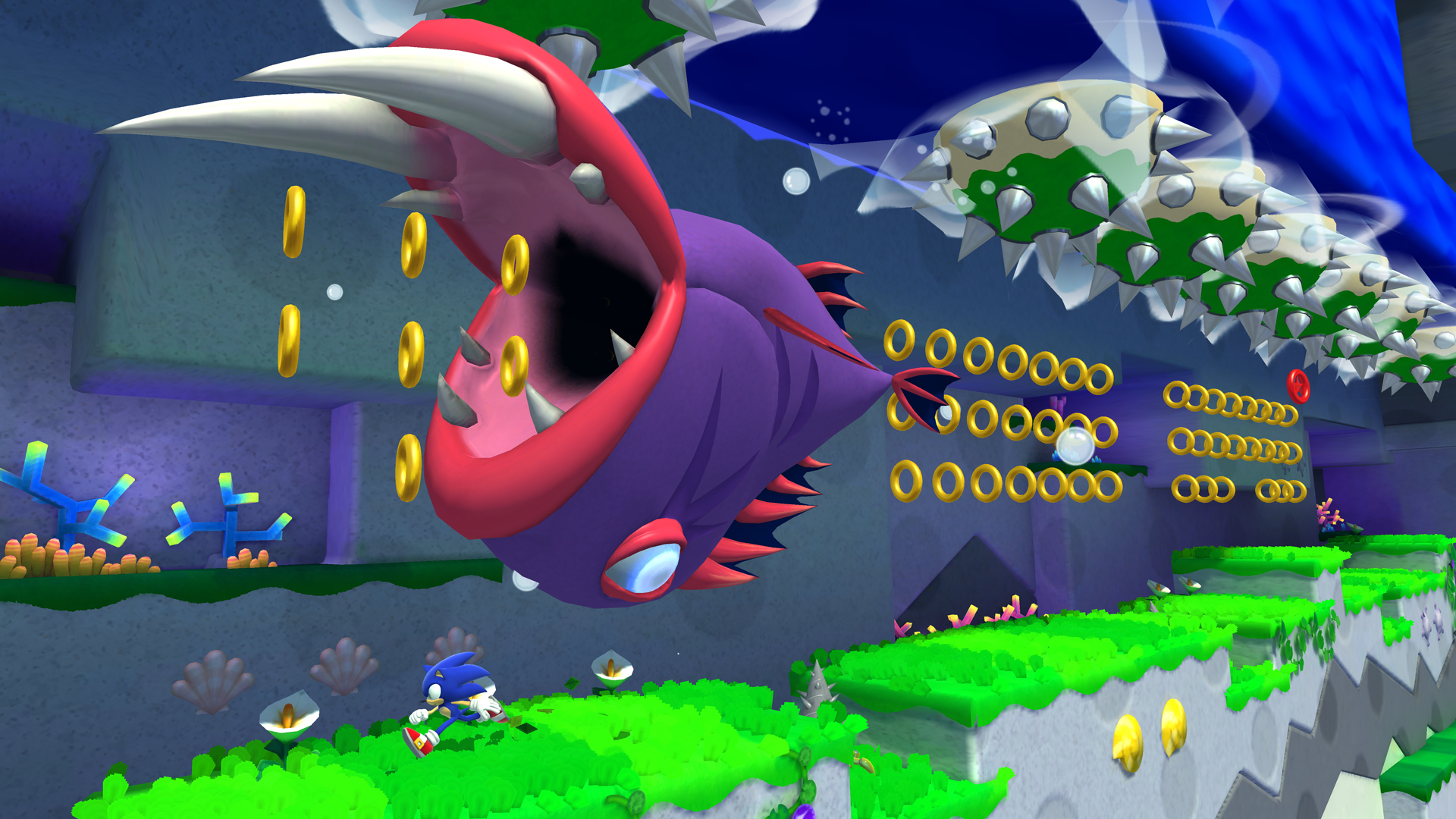 Wisps make a return as well, with some new abilities added into the mix. While most use the GamePad in some way, none do it particularly well. Cyan (laser), Yellow (drill), Green (hover) and Orange (rocket) make a return, and outside of Green wisps, the others make use of the GamePad’s screen and gyroscope. Indigo (asteroid), Crimson (eagle) and Magenta (rhythm) round out the new powers. Asteroid has the player tilting the GamePad left and right to move Sonic and collect enemies and debris, but it’s slow moving and a little annoying to control. Eagle gives Sonic the ability to fly by tilting the GamePad to go left and right. Rhythm is a strange one since all you do is tap on the screen to move Sonic across gaps too wide to make otherwise, and musical notes appear but don’t indicate to do anything if all collected.

The levels are broken up and scattered around and Sonic goes to each section ala planet hopping, something long since forgotten in the series . Of course Sonic gets around by using springs, cannons and jumping, but the fun and challenge is in which path you take in each section to get to the end and free his fellow woodland critters from their prisons. Sometimes levels will give you a choice in a brisk walk with less chance at death, while another path, sometimes on the other side of the section, provides a more challenging route where you’d have to be at your tip top best to get by or else you’ll be kissing your blue butt goodbye. The game also mixes in 2D platforming along with the 3D elements. These can be fun at first, but sometimes become challenging with the jumping, and at points the stage spins and flips around and can be a little disorienting. Should you ever find yourself failing a specific section multiple times, you’ll be given an item box next to you to skip to the next checkpoint. It’s nice to have to prevent getting frustrated, particularly in later levels. 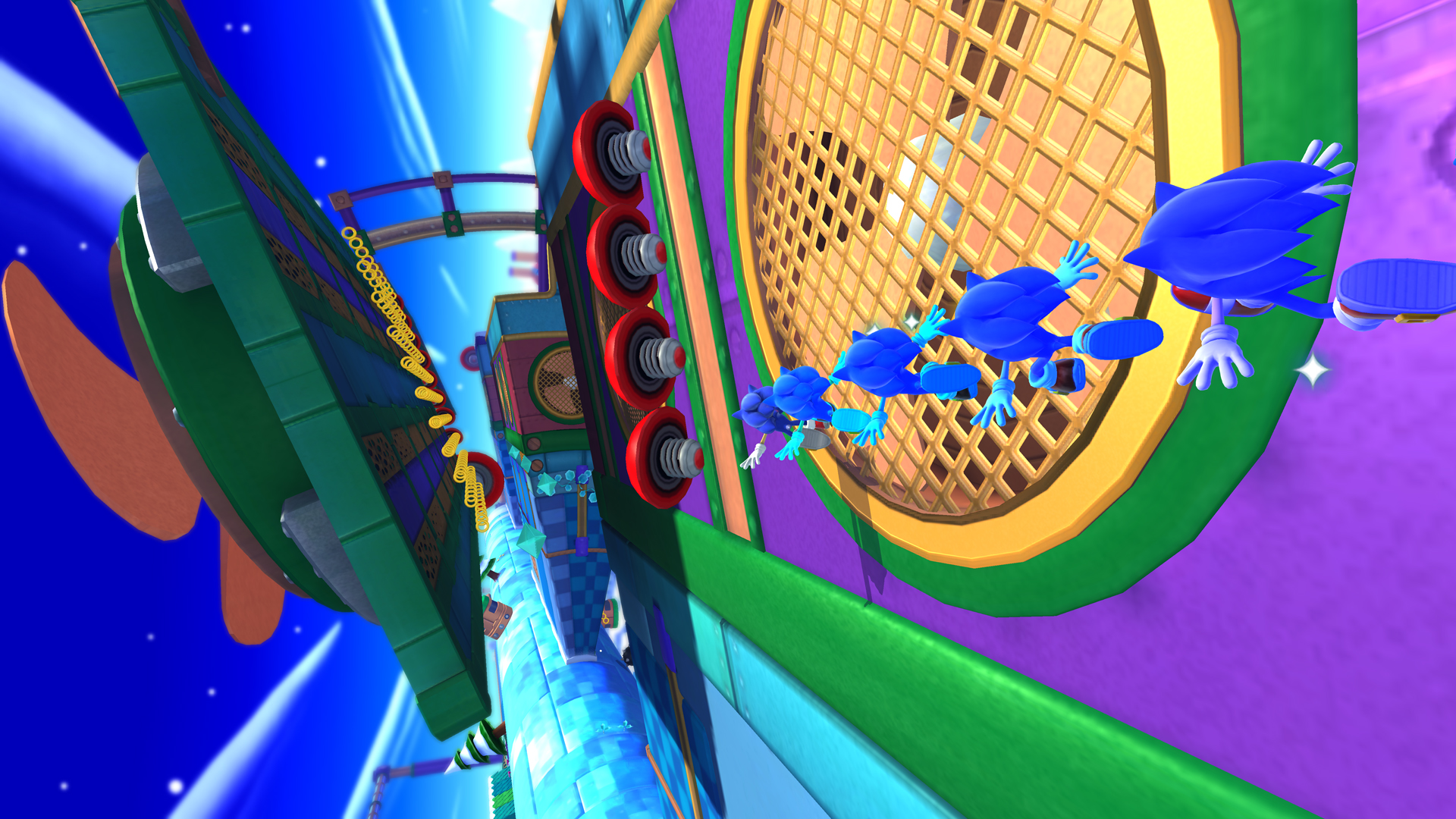 Variety is the spice of life in this game and you’ll be doing plenty of various work to get to the end of a stage. Most of the time you’re racing off to reach the end through normal means, while other times you’ll be rail grinding an entire level, luring fruit to a slicer and riding the juices to the next area. In one instance, you’ll even become a snowball and the game harkens back to Super Monkey Ball. You’ll also get a plethora of goodies to use in stages, either by completing tasks by Omochao (gather rings, kill a number of enemies, etc.) or through people from Miiverse, ranging from rings, lives and wisp powers. The only downside to this game is the length. If you’re a bare bones speed runner kind of gamer you can breeze through this, with a few game overs here and there, in five to six hours with only four zones in seven acts. However, there are incentives to continue on after the initial adventure, such as the addicting to discover Red Rings, various ways to go through the stages, multiplayer co-op or head to head racing and time attacks. Bosses are a breeze to defeat and all have patterns to exploit. As for the Nights DLC, it’s just reskinned Deadly Six fights, but nice to see Sega paying tribute.

If you’ve played plenty of Sonic games before, you know the series isn’t known for its deep and complex narrative, and this isn’t any different. Sonic and Tails get shot down by Eggman while trying to save an animal capsule and are forced to land on the mysterious world called the Lost Hex. There they meet the new foes for the game, the Deadly Six, who are under Eggman’s control. Events happen that cause the Deadly Six to rise up against Eggman, and it’s up to Sonic, Eggman and Tails to stop them before it’s too late. While it’s standard storytelling, it feels like you’re playing a an episode from the ’90s cartoon (AoStH) with cheesy one liners and over the top antics. This is a good thing, however, as it’s a nice change of pace from the serious tones previous games try to set. 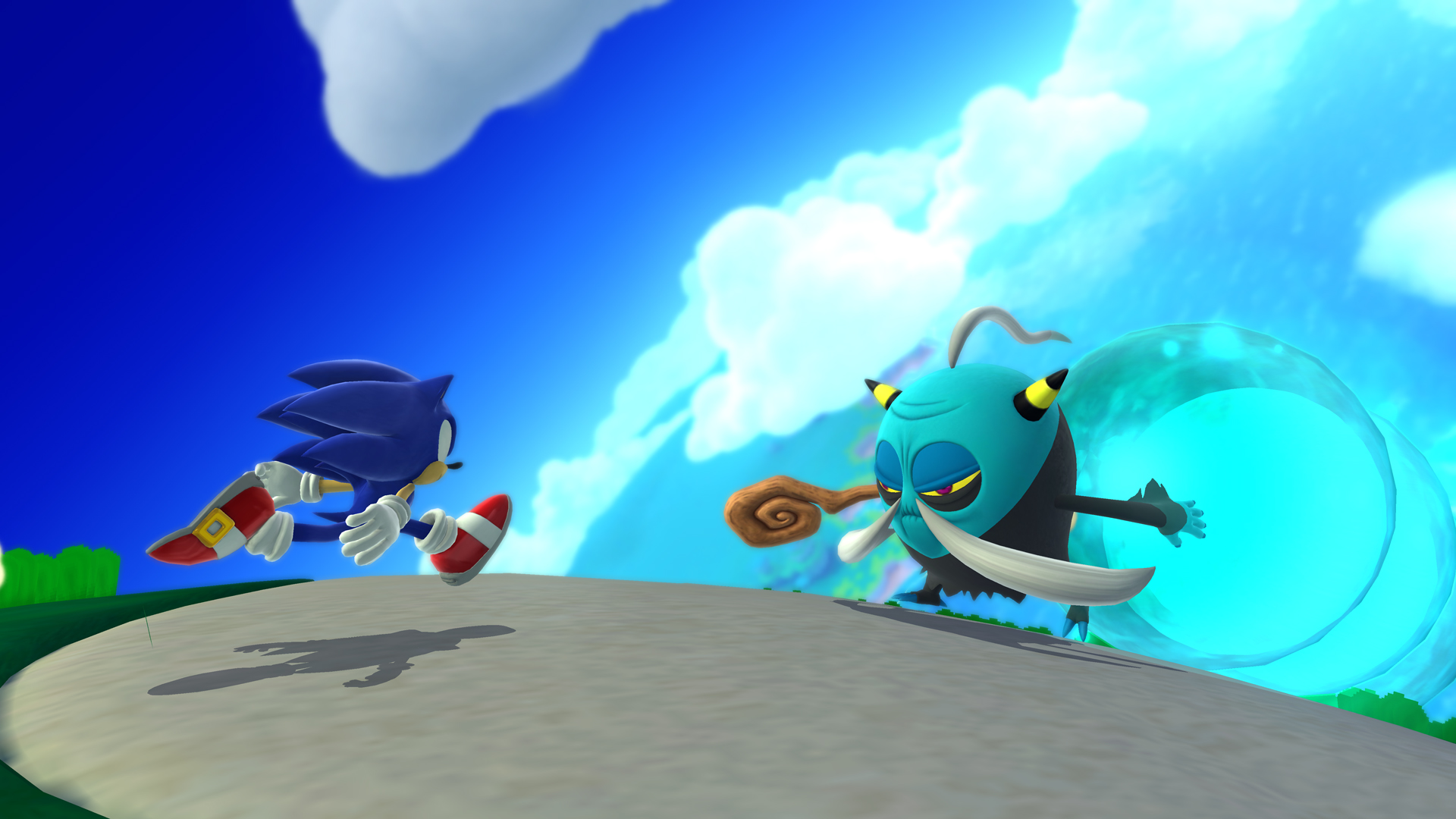 The voices present for each character fits them really well. Roger Craig Smith (Chris Redfield) returns providing the much needed voice for Sonic since he’s getting older and he should sound the part. Mike Pollock, the only existing VA from the 4kids era is still doing the role of Eggman and he’s even more enjoyable in this then in previous outings, making Eggman one of the most enjoyable parts of the story. Tails gets the same treatment in growing up and his voice shows it by Kate Higgens, who does an admirable job. The Deadly Six have solid voice actors as well, with Zomom the only one weak one.

Graphically, Lost World is a sight to behold. Everything is colorful and full of life, and the detail is bar none for Sonic’s first foray into the next-gen. I was impressed with Generations graphics with being able to see the detail on Sonic’s gloves, but now every detail can be seen in Sonic’s quills. Character designs are solid and seeing past badniks from the classic era look great today. The designs of the Deadly Six are creative, they look clean and fit perfectly in the Sonic Universe. Thankfully, you’ll be able to take in the sites more with Sonic’s lower speed instead of just blazing by and not really taking in all the detail. While the levels have a simpler design then previous installments, they’re varied and provide plenty of excuses to take your time to enjoy what each have to offer. 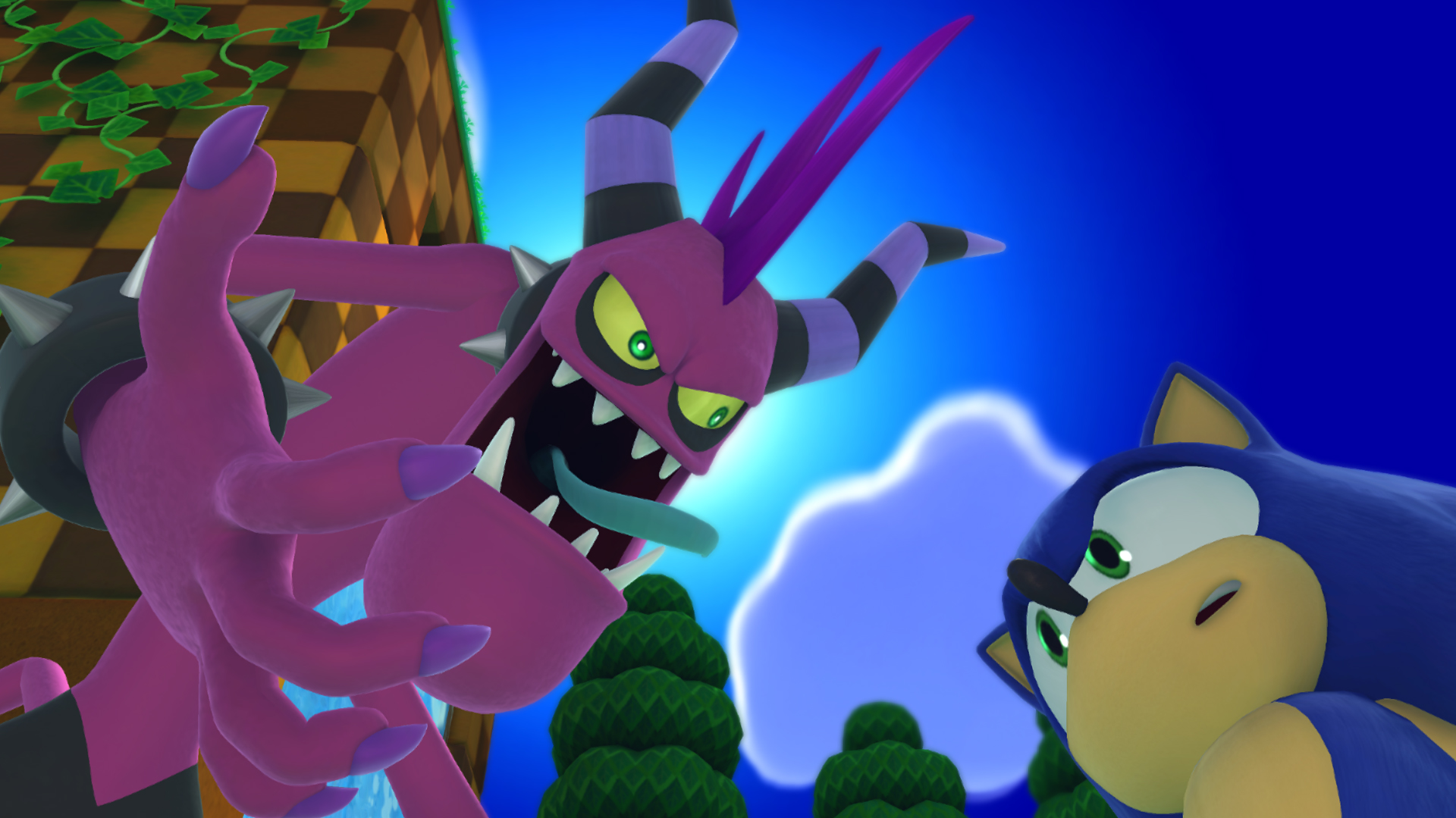 Sonic’s first foray into the next generation of gaming is mostly a memorable experience. While the overall length and difficulty spike in later levels might deter some people from picking it up, others will enjoy the lighthearted story, eye pleasing visuals, variety of things to do and flexible controls. It may be a departure from previous titles, but Sonic Lost World is an enjoyable new take on the Speedster.