For too long, awful shovelware titles for the iOS have neglected one key demographic: perverts. Sure, Final Fantasy fans had All the Bravest and Breath of Fire fans had whatever abomination Capcom has in store for it, but what did perverts have to let them know that game companies knew they existed and hated them for it? Luckily, Japan has finally met this exploding demographic halfway by releasing Punishment Punch Girl for the iPhone.

In Punishment Punch Girl, you play as masked high school girl Momiji, who spends the game in her gym uniform and underwear (you can also unlock more outfits, apparently). The game takes place in the year 20xx and Japan has become overrun by crazed perverts that make riding the subway incredibly awkward. And, judging by the fact that the game company thought there was a market for this sort of game, I feel like we could replace the xx with 13 and no one would disagree. The kind of perverts you’ll be facing off against is quite varied and terrifying, and some of these pictures from the game are guaranteed to ruin your day for weeks to come. 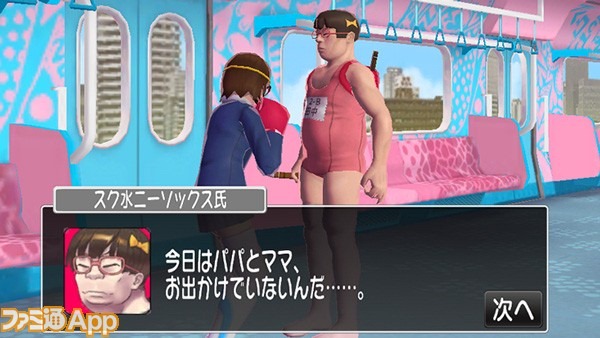 We start with your run of the mill pervert that dresses in a child’s gym uniform and accosts little girls on trains. These are the slimes or Ratatas of the pervert world, popping up in big herds early on and largely forgotten about by the time you get to the end game. In the year 20xx in Japan, you are more likely to run into one of these guys on your ride to school than you are to see a mother hug her child. The bows in the hair are a nice touch, as is the haircut he’s sporting which is the official style of everyone not allowed within 100 feet of a school. In case you’re curious, what he’s saying roughly translates to “Mommy and daddy aren’t home today.” Congratulations! You’ll never feel clean again. That is the kind of dirty you can’t get off with an industrial strength belt sander. Somehow, it gets worse from here. 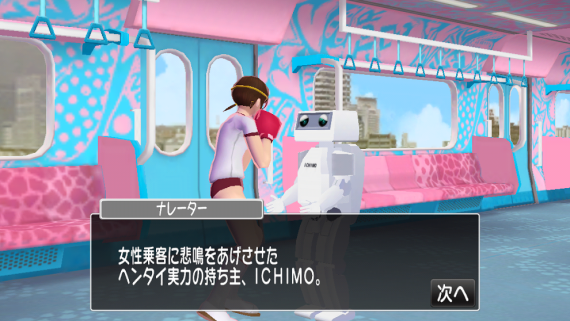 Awwww…it’s just an adorable little robot. Unfortunately, what a single screen shot fails to properly catch is the fact it is constantly humping the air as he talks to you. I don’t know if that is a man in a robot suit or a robot specifically programmed to hump everything, but either way I think we just discovered Japan’s interpretation of The Terminator franchise. Judgment Day is a hundred times more terrifying, and filled with far more leg humping. In Japan’s version of Wall-E, humans left the Earth not because they destroyed it with trash but to escape unwanted robot sex. At least this rob0-humper has the decency to look sad about his perversion, which is more than can be said about the next guy. 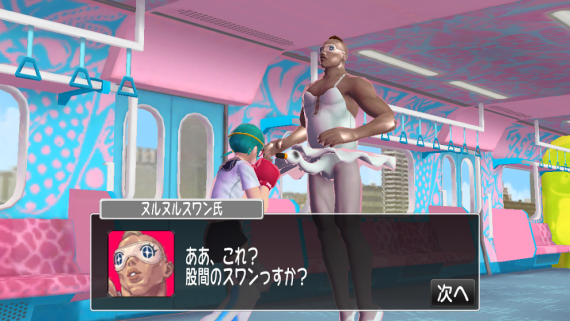 Nope. I am not paid enough to cover stuff like this. When I woke up this morning, “man wearing a tutu with a swan head for a penis” was absolutely at the top of my list of things I was positive I wasn’t seeing today. Thank you Japan for proving that no matter how safe I think I am, you are somewhere lurking in the darkness to destroy everything that is good and sane. I had hoped to sleep tonight, but instead I’ll be hiding in the corner of my room with a baseball bat and hoping whatever this is can’t escape the realm of nightmares to attack me. He looks like he has just come from starring in the adult version of swan lake, and how this man even got on the train without being immediately arrested has me concerned for the state of Japanese police in the year 20xx. I’ve never seen a swan head looking at me and been so utterly terrified of it.

Check out the full cast of terrifying perverts below, which include some individuals that I luckily could not find any individual screen shots for. I’m pretty sure the one guy in the middle is a monster cut from Amnesia: A Machine For Pigs for being too disturbing. These guys are all so weird that the pervert with the huge camera and the guy fondling his love pillow almost get lost in the shuffle. 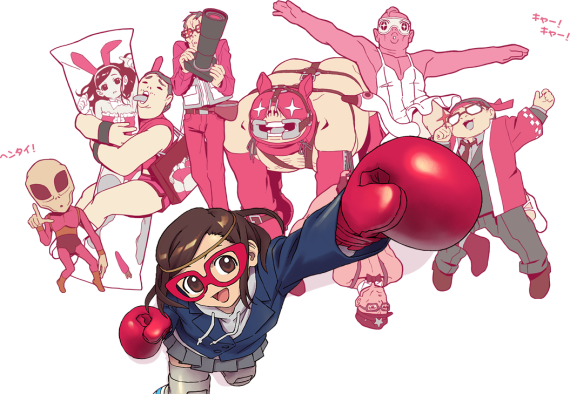 The game itself is fairly boring, requiring you to basically smash the same four buttons over and over again. It is a rare game that can combine insane perversion and chronic boredom, but Punishment Punch Girl does it so adeptly. I have to praise the game for its twist ending though, where after defeating the final boss you find out the true pervert was you all along. It’s kind of like The Sixth Sense of video games, except the part of Bruce Willis being played by a man in a leotard with a swan head for a penis. So…basically exactly like The Sixth Sense then.