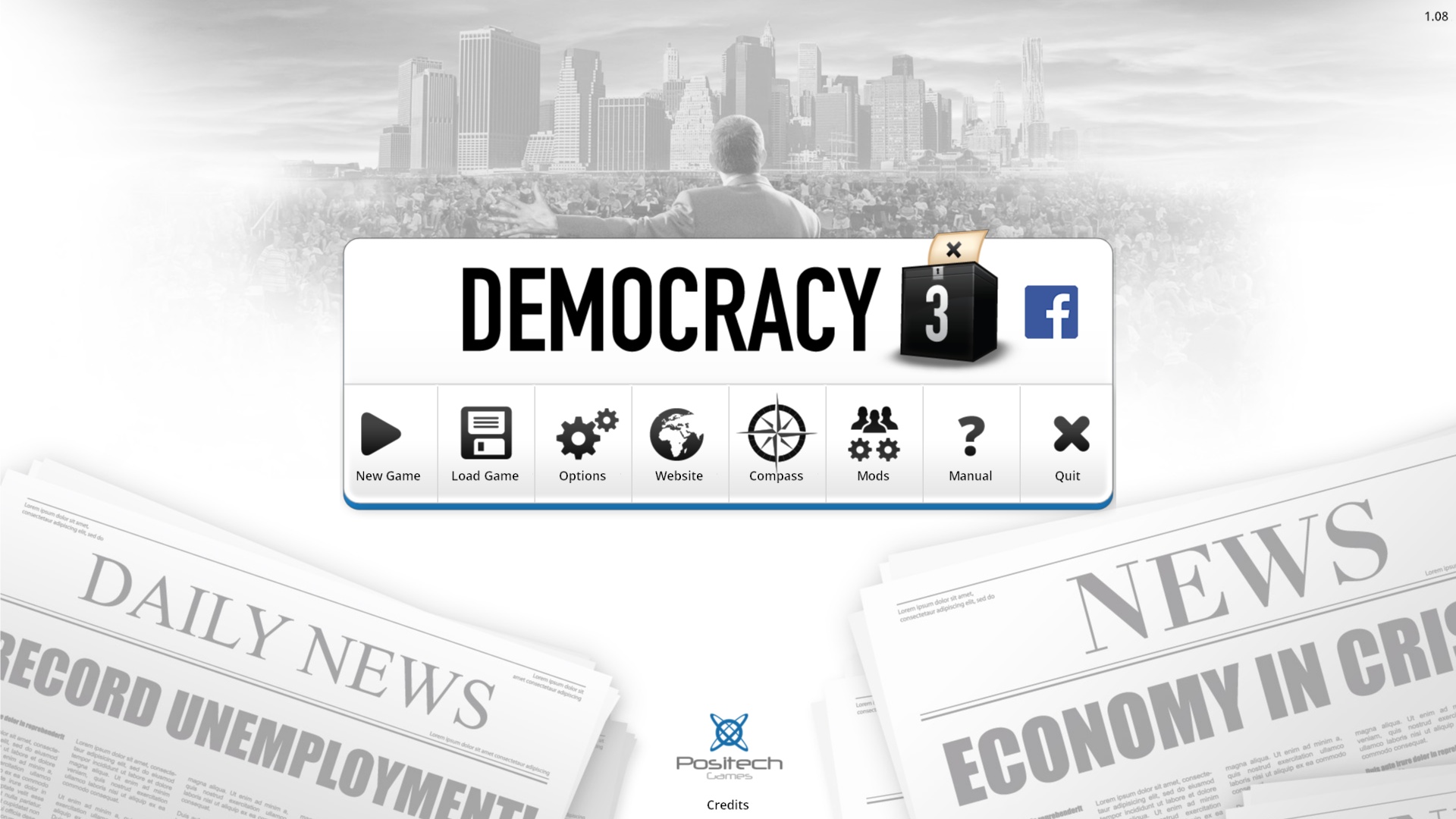 With the US government shutdown fresh in our memories and tensions between right and left higher than they’ve ever been, there was potential for Democracy 3 to be a stunningly relevant and poignant game. With all its infighting, backstabbing, scheming and pandering, the world of democratic politics seems tailor-made to be turned into a complex simulation. Unfortunately, be it due to the limitations of independent development or merely unambitious design, Democracy 3 doesn’t live up to its potential.

Like its predecessors, Democracy 3 is a very focused game. The sole method of interaction is setting policies, which affect your country’s economy, the environment, foreign relations, and a multitude of other factors. They can cost or generate money, and will generally sway political opinion one way or the other. They affect (and to a limited extent are affected by) “Statistics” such as GDP and environmental quality, and “Situations” such as cybercrime waves and asthma epidemics, which in turn affect each other in an intricate web of feedback loops. 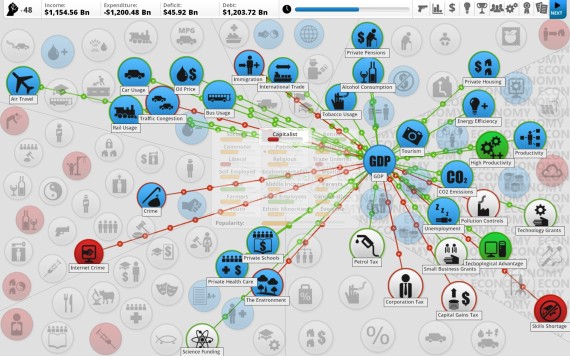 Policies are bought with a resource called “political capital” which is generated by your cabinet members each turn, depending on how loyal they are to you. Cabinet members have certain voter group affinities that affect their loyalty – essentially, if the voters they care about are happy, so are they – and ever-growing levels of experience that cut the political costs of policy implementation. Additionally, most policies either generate a cost or income, which works into the government’s quarterly budget. If you spend more than you take in, you end up racking up debt, and if you take in more than you spend, you end up with a surplus, eventually putting cash in reserves.

All this factors in when it comes to election time, when happy voters will try to put you back in office, unhappy ones will try to yank you out, and apathetic ones will stay at home… brooding, I guess. Democracy 3 puts a lot of effort into making it feel as though your country is populated by individuals. Each voter belongs to a number of voting groups (divided by age, political leanings, faith, race, and economic status), and prioritizes each one to varying degrees based on personal preference (so even if you’re neglecting the youth vote, youth who care about the environment might vote for you anyway). You can run focus groups and look at polling data to gauge how well you’ll do in the upcoming election, and gear your policies appropriately. 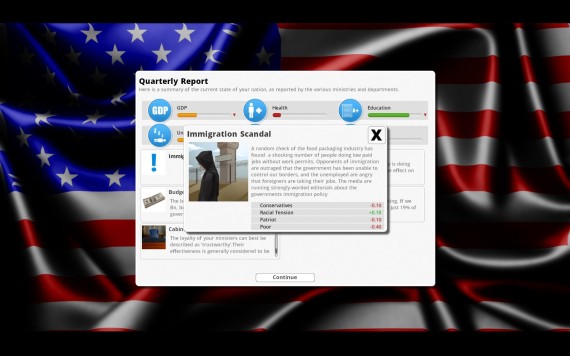 It’s all pretty straightforward and elegant once you get a handle on it, which is kind of the game’s biggest problem. Real democracy is messy, confusing and often downright counter-intuitive. You have to juggle the demands of dozens of special interest groups and lobbyists, negotiate with other parties who share power in the government, deal with other world leaders worrying about the same things in their countries, and constantly worry about funding and winning your next campaign. Instead of exploring all these interesting concepts, Democracy 3 chooses to maintain a laser-focus on its core mechanic of setting policies, and while that might make for a more elegant design, it also robs the simulation of any sense of realism. I mean, an electorate that votes based on issues? Sheer insanity.

The developers have made some half-hearted attempts to shake things up with “Events” and “Dilemmas.” Events are semi-random occurrences such as earthquakes, military actions, scandals, and market crashes that can affect the economy or voter confidence one way or another. Dilemmas are semi-compelling political questions that come up, such as whether to keep gay marriage legal, allow a corporate merger, or offer asylum to immigrants. These only really have much of a tangible effect in the early game, however, as once you’ve gotten the economy growing and won over a majority of the voters their impact is negligible. Not only that, there’s also far too few of them, and within a few hours I’d gone through three financial meltdowns, legalized euthanasia twice, and been excommunicated by the church no fewer than a dozen times.

Even in its core mechanic, Democracy 3 falls short. There’s a fairly limited number of policies available to employ, and all of them are unlocked from the start. Once you have a handle on what policies impact what statistics and situations, and which statistics are the most important (hint: it’s the 6 displayed at the beginning of every turn), there’s not a lot of variance in what action you need to take to improve the lot of your country.  After hitting a few hiccups early on in my first game, I was able to transform Canada into a utopia with the best GDP, Health, and Education in the world, and streets entirely free of criminals and the unemployed, with a 99% approval rating and a reserve of over 600 billion dollars. There’s simply not enough complexity for the game to be truly challenging. You either snowball toward dominance or total ruin every single time. 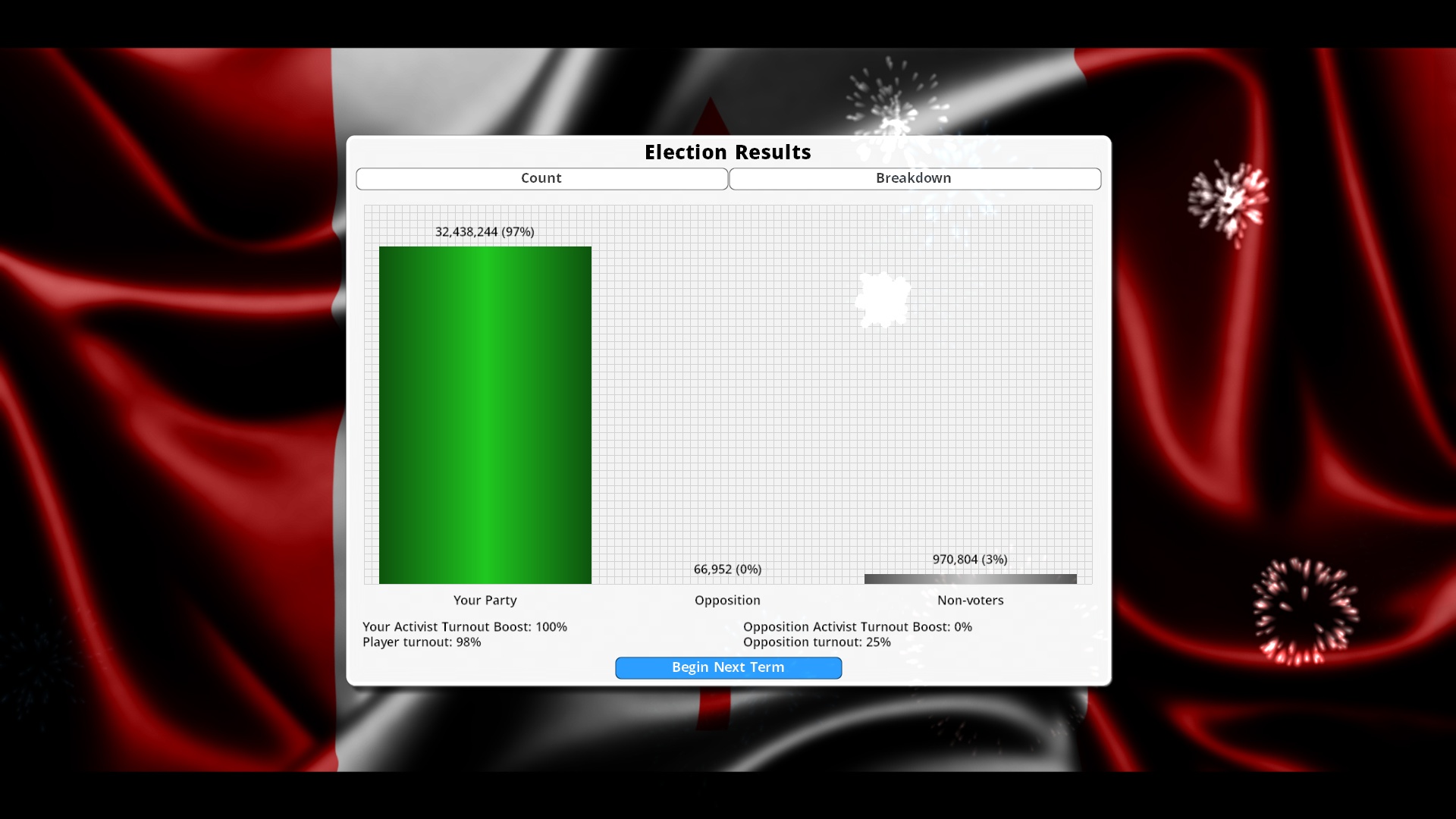 Politics *should* complicate things to some degree, forcing you to make compromises to please your cabinet and the electorate, but in the grand scheme of things, they’re disappointingly easy to ignore. It’s entirely possible to eliminate problematic voter groups entirely, eradicating religion with an emphasis on science education, or driving motorists to extinction by encouraging everyone to take public transit and telecommute.  Additionally, so long as you keep most of your cabinet happy, it’s entirely possible to just fire and replace any minister whose loyalty gets too low. And conveniently, the policies that best improve the environment, the GDP, and so on tend to be the ones that make the majority of people happy.

This also isn’t much of an improvement over Democracy 2, which is pathetic considering that game has been out for six years now. The interface has been drastically improved to be less of an eyesore, and a number of tweaks have been made to change how voters operate (they now have average incomes and become complacent over time), but there are no new mechanics to justify another purchase if you own the last one. The only noticeable change is a shift back from fake parody countries to real ones, which could have offered some much-needed variety, but only serves to highlight the game’s greatest failing. 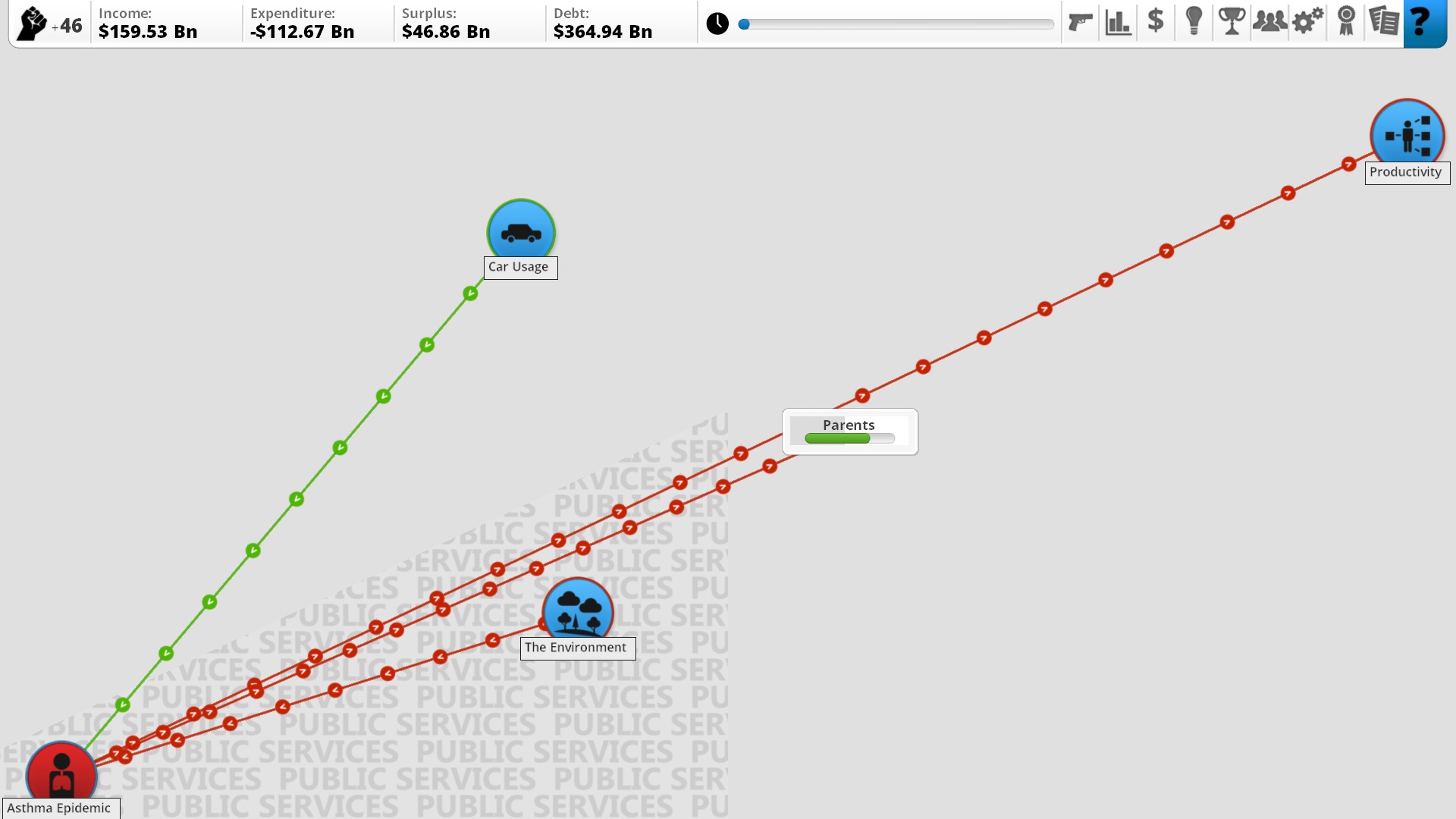 Democracy 3 is, ultimately, too America-centric for its own good. The only nations available to play out of the gate are majority white and majority Christian, which means that no matter where you set your game, you end up fighting the same ethical battles and dealing with the same political tensions, with only a little variety in how liberal or conservative the demographics skew. Most criminally, the game only simulates an America-style two-party democracy, which doesn’t accurately represent any of the other playable countries. All the choice of country really changes is what static image of a flag shows up between turns.

Improved mod support offers hope that the game will expand and gain some much needed gameplay variety, but frankly, that’s not much of a point in its favour. The idea that a commercially released game – one that costs 25 freakin’ dollars – needs user-made mods to offer any reasonable value is insulting to me as a consumer. It’s doubtful that many expansions will be made, given the game’s tepid reception, and the odds of any significant changes being made by fans are next to zilch. 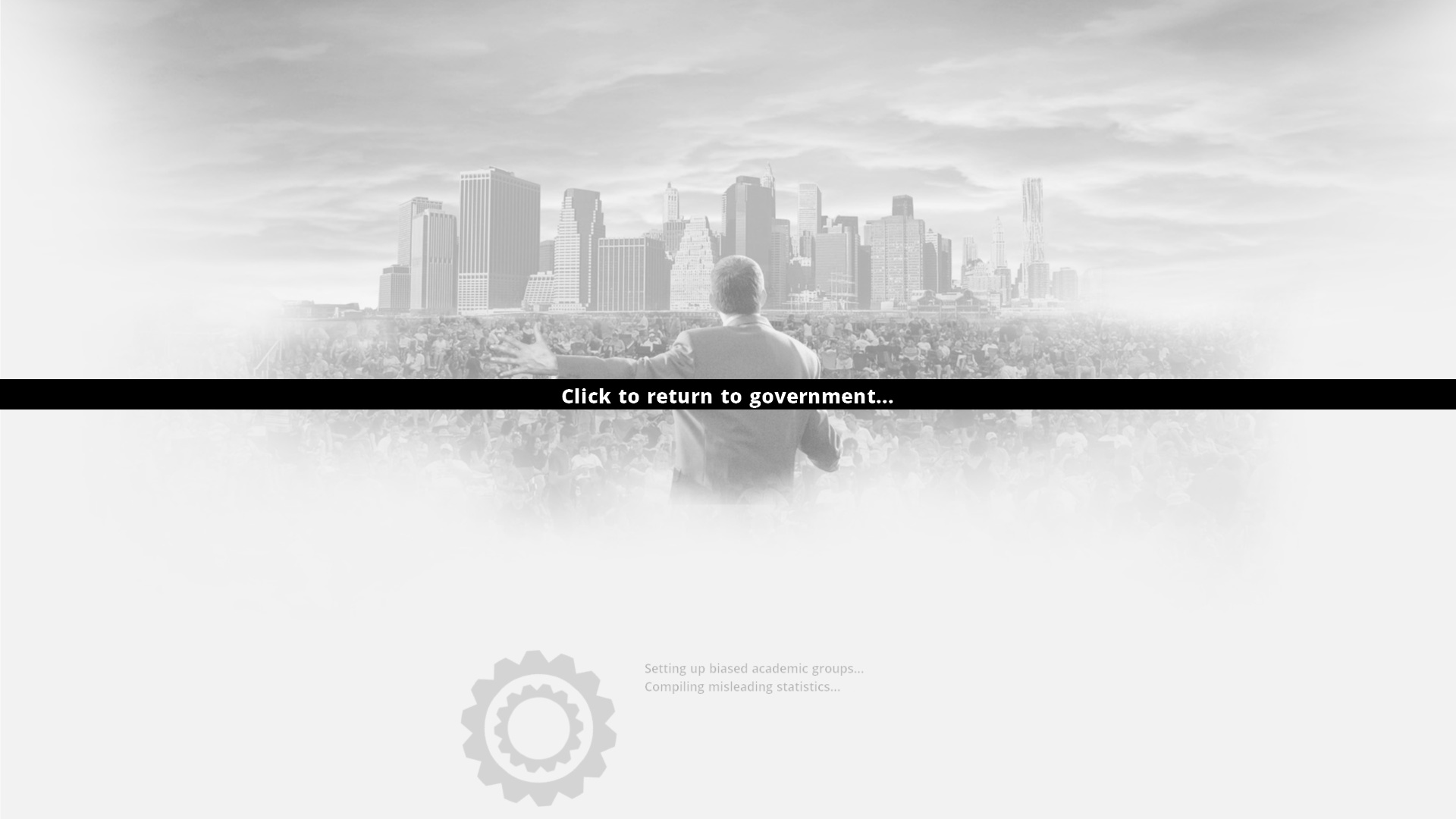 Democracy 3 only seems concerned with simulating American politics, and even then, does so poorly. With a congress to battle, other parties to bargain with, districts to gerrymander and a constitution to amend, this could have been truly interesting. Instead, it’s dull, repetitive and overly simplistic. If you’re already a fan of the series, it’s impossible to recommend a bare-bones expansion like this at its current price point. If you’re not… well, I have a hard time imagining that you’d enjoy the third installment at all.