Nintendo has confirmed that their Wii Mini console will be making its debut in the States sometime this November.  This small console was released as a Canadian exclusive December 7, 2012 though many assumed it would one day make its way to other countries.  The console is quite compact in a black-and-red shell complete with a red Wii Remote Plus.

Despite the release of the Wii U Nintendo is still clinging to the Wii.  Production for the console has halted in Japan, but Nintendo has made it clear that the console will stay in production in North America and Europe.  So far the Wii has amassed lifetime sales of just over 100 million, about 20 million more than the PS3 and Xbox 360.  However, it is not even close to matching the sales of the PS2. 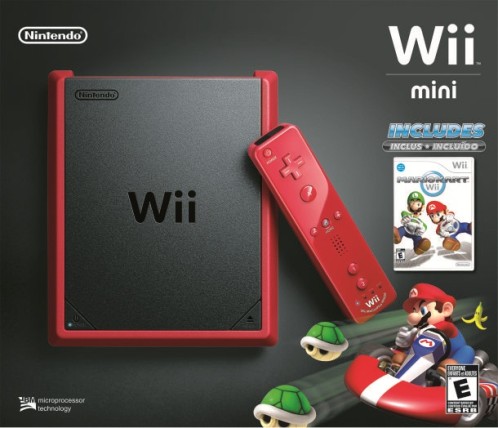 Wii Mini will retail for $99.99 and come packaged with Mario Kart Wii.  There is a huge caveat to this seemingly great deal.  Wii Mini does not have any online functionality so you can’t play any multiplayer or download anything from the Nintendo eShop.  The system also lacks SD Card support, Nintendo Gamecube backwards compatibility and Nintendo Gamecube controller support.  This version of the Wii is marketed more towards people who just want to play together on their couch.

Wii Mini is out sometime this November.