Having completed what viable titles there are available on the Wii, I was left wondering whether or not simply to push the console back out of the limelight into the lonely shadows of my closet. I had no desire to sit through another waggle-fest of minigames nor another rehashed Nintendo venture. Luckily, MadWorld was announced, and I rejoiced. Though at the time I wasn’t certain whether or not it would be worth purchasing, it breathed a bit of new life into the little white console. Promising gore by the bucket, deliciously violent executions, and a twisted storyline, MadWorld had me hooked by its second press release. Looking back now, I can safely say that while it has reignited my passion for the Wii’s potential, it’s not without its faults. Overlooking them, though, this is one bone-crunching good time that deserves one last hurrah  before we move on to the next generation. A bloody one. 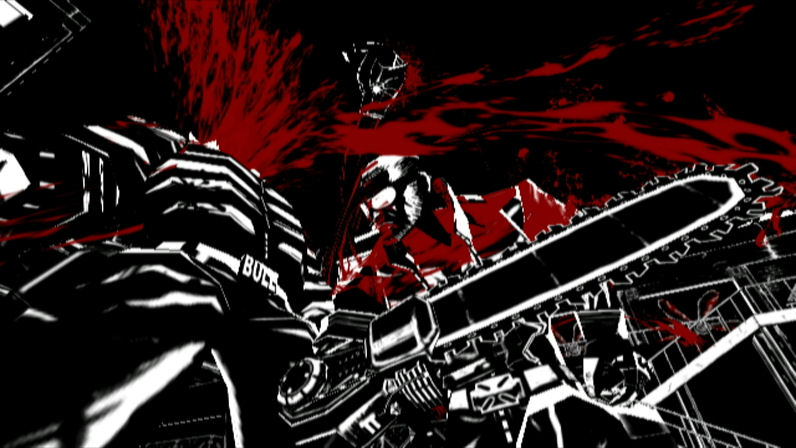 Varrigan City has been infiltrated by some particularly sadistic terrorists known simply to the public as the Organizers. This band of malevolent thugs aren’t the least bit interested in lifting Varrigan residents’ cash, valuables, or even their dignity. No, they seek something far more twisted – they want to play a game. Their game – “Death Watch” – pits innocent civilians against a host of foes provided graciously by the Organizers. Challengers, known as Killseekers, must eliminate the competition in as many gruesome ways as they can possibly devise. The winner of Death Watch receives the hefty sum of $100,000,000 as well as the right to keep their life.

Enter Jack Cayman (just Jack, as he prefers), who’s just broken through a quarantine on Jefferson Island. He’s a no-nonsense loose cannon who’s somehow managed to receive a sponsor, on the third day the DeathWatch games have taken place. Though the plot may seem relatively straightforward at first, it’s foolish to believe that the entire premise revolves around this sadistic game. As gamers progress, they’ll be blindsided by a bevy of twists and turns – almost making up for the fact that this is a Wii-only release…almost. As each challenge is completed and the boss of each location is downed, you’ll find yourself playing for the sheer joy of seeing what’s around the corner, and that’s what makes the narrative particularly compelling. 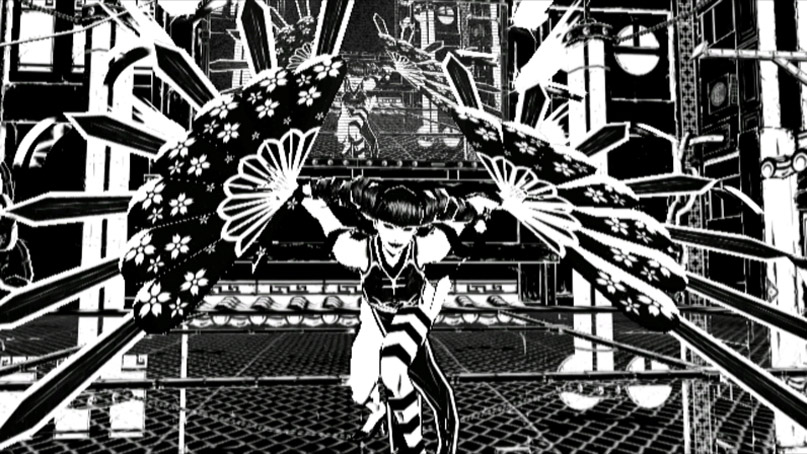 Each stage is outfitted with so many life-ending appliances that there are plenty of options to choose from. Staples of most locations include the Rosebush (a row of spikes mounted to a wall), a human garbage receptacle, rolling, spiked presses, and even meathooks. It’s up to you how you’ll dispose of the enemies, whether it’s by decapitation via Jack’s chainsaw, a toss into the Rosebush, a tire over the torso then thrown onto a meathook,or a host of other options. My absolute favorite out of each level may be forcing a signpost through a nameless goon’s forehead, imprisioning him with a tire, then slamming him repeatedly into the Rosebush.

If you’ve had it with the droves of non-”core” games offered up for the Wii, MadWorld is quite possibly your savior. It oozes cool out of every pixel, from the deliciously graphic and over-the-top executions to its twisting storyline and compelling voice acting performances. If you enjoyed No More Heroes, it’s a safe bet you’ll find that MadWorld is up your alley as well. However, I would suggest giving it a rent before a final purchase, to test the waters – and how much your stomach can take, for those of you who can’t stand a little blood. If you can, though, it’s awesome.