So you never purchased a Wii and you’re interested in the $99.99 Wii mini holiday bundle. First of all, congrats for holding out so long. You’re now ready to swoop in for some prime deals, and you’re getting a way better arrangement than what we got when we jumped on the console as soon as it released. But whatever are you going to play? First-party Nintendo titles are a given, but there has to be something else, right? There are, and here are three Wii titles you need to nab if you’re planning on pulling the trigger on this holiday delight. Stock up, and for much less money than the rest of us will have to spend if we want to stay current and relevant.

You’ve probably seen several blogs and outlets singing its praises by now, but it’s finally time for you to dig in. The bizarre tale of Travis Touchdown and his quest to become the highest-ranking assassin in the world is one that can’t be missed. It’s a unique blend of swordfighting, platforming and questionable gesture-making with the Wii remote and nunchuk. In between cutting heads off and performing tasks as an assassin, pump gas and take on odd jobs to fund your sinister business. Sit on the toilet to save your game! Most of all, soak in the craziness of names like Sir Henry Motherf@!$#r and Bad Girl — seriously, she’s a gorgeous blonde who literally bats gimps from an assembly line. If you’re not won over already then I just don’t know what to tell you. 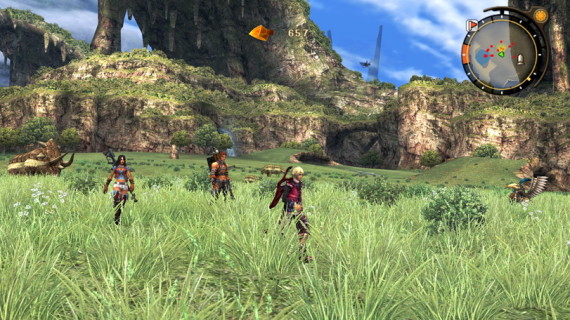 There’s a wealth of fantastic RPGs on Nintendo’s wagglestation, with The Last Story and Little King’s Story to name a few, but Xenoblade Chronicles is where it’s at. It’s tougher to find now more than ever, but its unique blend of real-time combat, traditional Japanese RPG quirks, and believable narrative and characters make it one of the best role-playing games of this console generation. A sterling soundtrack, plenty of bang for your buck, and the distinction of being Nintendo’s last “we never forgot about our core gamers” push make Xenoblade Chronicles one game you should seek and obtain immediately, especially if you’re a Final Fantasy devotee.

House of the Dead: Overkill

Do you like zombies? Violence? Copious amounts of swearing, sex and stereotypical angry cop characters? Boy, do I have a game for you. House of the Dead: Overkill takes the camp level of its parent series and turns it up to 11 as it barrages you with over-the-top grindhouse-style kills, F-bombs and creepy guys with Oedipus complexes. It’s nuts, and it’s a whole lot of fun. The Wii is the perfect environment for a light gun shooter, and this is demonstrated even further with this iteration of the long-running zombie apocalypse simulator. Fans of campy ’70s-styled horror will have a field day with this one, especially the soundtrack. Then when you’re done with this game, seek out The Typing of the Dead: Overkill on PC for some tie-in and (slightly) educational fun.